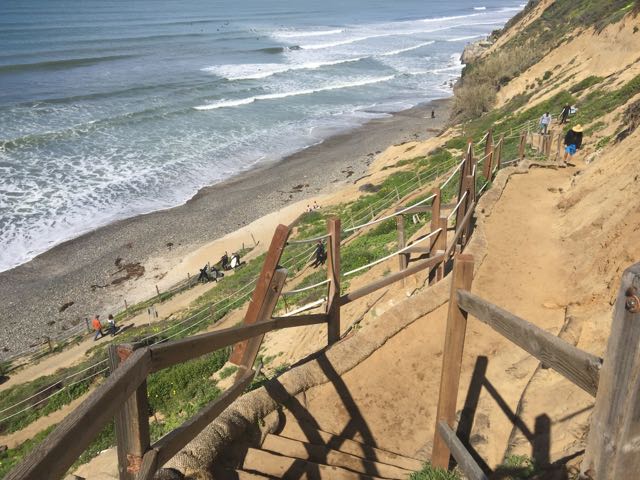 The change in the preferred alternative for the project provides for another opportunity for managed retreat instead of hard armoring. Access to the beach will be maintained and/or improved without destroying the very coastal resources the community was trying to access in the first place.

Instead of a huge “erodible concrete” buttress 15 ft. thick at the top and 25 ft. thick at base covering the entire base of the landslide at Beacons Beach in Encinitas, an already narrow beach, the city will now pursue a staircase to maintain access to the beach, and reconfigure the parking lot to allow the landslide to stay in place and reach a safer angle of repose. Previously, the city of Encinitas was on track to select an “erodible concrete” buttress as the preferred alternative, constructed of material that has not been proven to erode, and would be maintained in place, thus acting as a defacto seawall. The project still has to go through the environmental review process, including an EIR, and the Coastal Commission, but the minimal impact of a staircase as the preferred alternative instead of huge “erodible concrete” buttress, is a real win for the coastal environment.

Beaches are a unique and dynamic landscape that should be protected for the future. The Surfrider Foundation is leading efforts at the state and local levels to protect our shorelines on every coast. Our efforts are focused on establishing appropriate setbacks for development, opposing shoreline structures, and placing coastal lands in public trust.