2017 in Review: The Year of the Activist

2017 was a banner year for the Surfrider Foundation. Our grassroots network achieved 50 coastal victories to protect our ocean, waves, and beaches, one of the most successful years in Surfrider’s storied history. These victories tackled a range of coastal threats – from seawalls to plastic pollution to sewage overflows to oil terminals – and are a testament to the power of citizen activism.

Yet, these victories tell only part of the story. Over the past year, Surfrider engaged over 52,000 volunteers in our chapters and youth clubs. These individuals are the leaders in their communities, schools and neighborhoods who provide a never-ending commitment to defend our coasts. They are the ones who organize chapter events, clean beaches, green campuses, speak at city council meetings and wage the battles against harmful projects.

The Surfrider Foundation also flexed its muscles at the federal level to defend our coasts. By spring, the Trump administration had issued executive orders to expand offshore oil drilling, eliminate clean water and climate change programs, and shrink our national monuments. Surfrider quickly sprang into action, launching national campaigns and mobilizing our supporters to speak out. Our efforts contributed to one the largest grassroots responses ever seen as millions of Americans contacted their federal officials on environmental issues.

The overwhelming response to these federal attacks helped stall the administration’s efforts and has given hope that we can minimize impacts from these proposals in the coming years. Rest assured that Surfrider’s network is only beginning our fight to defend our nation’s coasts from these threats!

Below is a summary of some our 2017 achievements across each of our focus areas. We extend a heartfelt thank you to all of our chapters, volunteers, supporters, and partners who contributed to this success! 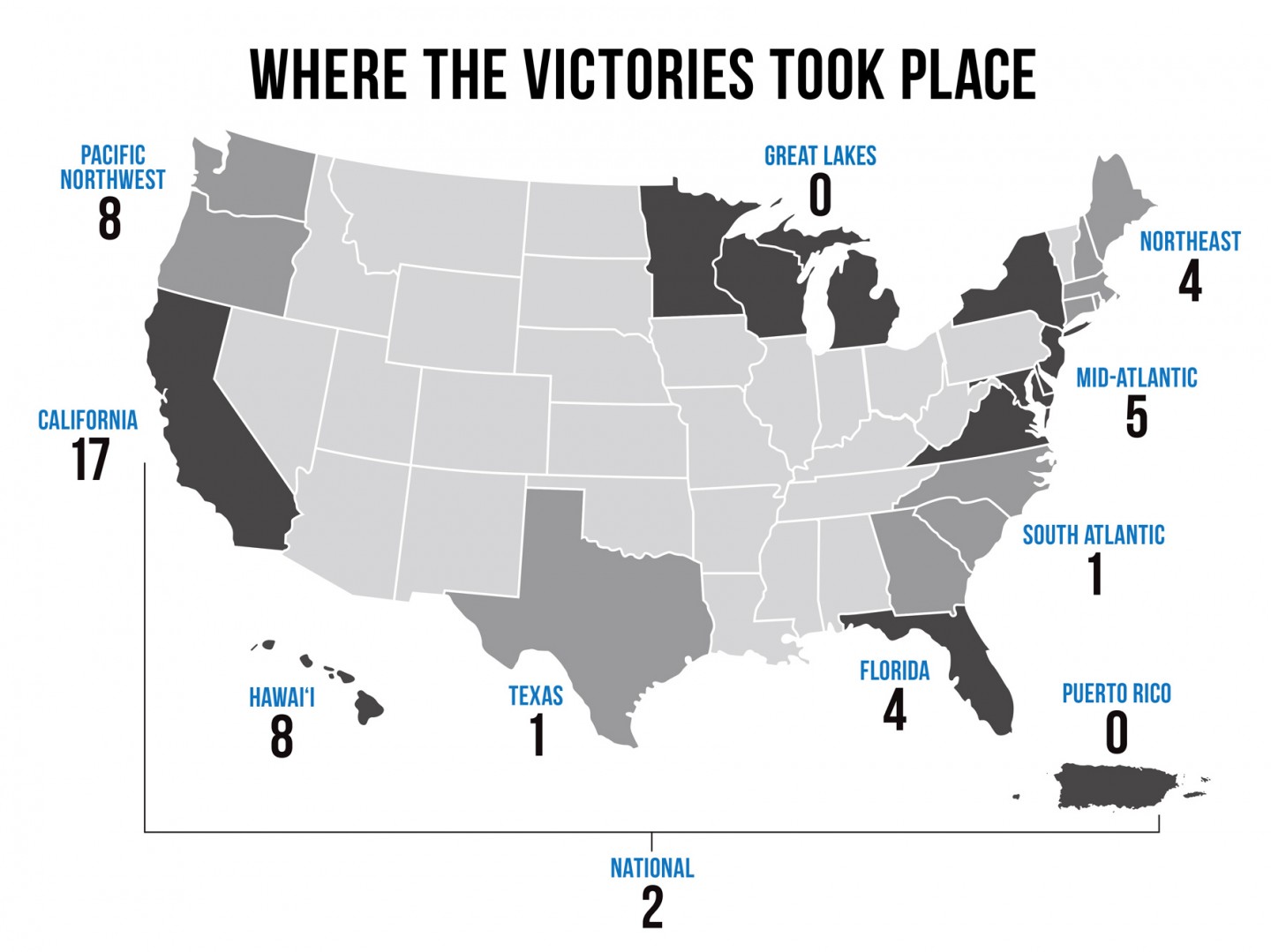 Surfrider secured 8 victories to protect water quality at the local, state, and national levels. We saved federal funding for the BEACH Act to monitor water quality at beaches nationwide. We passed policies in California to incentivize water conservation and recycling. And, in Hawaii, we compelled public agencies to post water quality advisories. These campaign victories were complemented by Surfrider’s volunteer monitoring of hundreds of beaches, installation of Ocean Friendly Gardens, and numerous community partnerships to solve local pollution problems.

Surfrider secured 11 victories to protect and improve coastal access in the states of Maine, Florida, California, and Hawaii. Notable wins included protecting beach access in Miami Beach, Florida, defeating a river access fee in York, Maine, and passing a state law in California to improve coastal access through lower cost accommodations. Surfrider also secured a favorable court ruling to affirm public access to Martin’s Beach, CA which billionaire Vinod Khosla has been blocking since 2010. Finally, Surfrider partnered with community groups across the U.S. to help bring thousands of underserved youth to the coast.