Congressman Issa and the City of San Clemente should know that “two wrongs don't make a right.” But that doesn’t appear to be the case because they are both trying to dismantle a lawsuit settlement that permanently protects San Onofre State Beach.  The lawsuit settlement was reached between Save San Onofre Coalition (SSOC) and the Transportation Corridor Agencies (TCA) after a 15-year battle to protect San Onofre from a toll road. 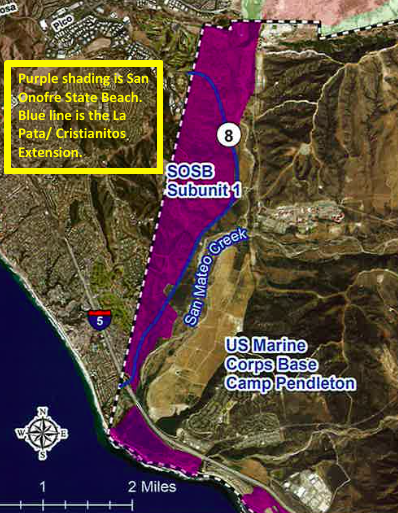 Congressman Issa flat out said that he wants to undo the settlement and work with the Marines to build a road through the park.  Then, this week, the City of San Clemente announced it will file a lawsuit against the TCA challenging the settlement that permanently protects the park.  By filing a lawsuit, the City is effectively saying they want a road to go through the Park.  The SSOC is not making that assumption flippantly.  In addition to wanting to undo our protective lawsuit, city councilmembers said at a March 21 council meeting that they “want an arterial that connects La Pata to Cristianitos”—that, my friends, is secret code for “build a road through the park.”

Look, we understand there are going to be diverging ideas amongst local communities about the best way to solve traffic—but one thing is exceptionally clear—thousands of people have already adamantly opposed building a road through a park.  Remember the 4,000 of us who attended the Coastal Commission hearing and the 3,500 who attended the Secretary of Commerce hearing in 2008 to protect San Onofre?  Oh, and lest not forget the many state and federal agencies that rejected the road numerous times.

It's extremely tone deaf to dig up these tried-and-failed plans again. It has been proven repeatedly that people from around the world cherish San Onofre State Beach—California’s 5th most visited state park that brings in 2.5 million visitors a year who contribute to the local economy.

News flash: It’s time to move on! Building a road through a State Park is an outdated idea that sabotages the majority voice. However, if the City of San Clemente and Mr. Issa want to target the Park again, the SSOC is ready to do what we have done successfully for 15 years—rally thousands of people to protect our beloved park from a road, and influence the flawed decision-making.

For more information about the victory that was made possible with the help of thousands of passionate and motivated advocates who stood up to forever protect San Onofre State Beach and Trestles, read this blog and read this FAQ about our lawsuit settlement.