Why and when did you get involved with the Surfrider Foundation? 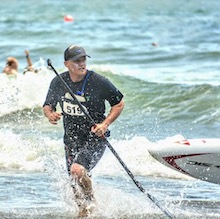 I first joined as a member in 2007 without knowing much about the Surfrider Foundation other than what my gut told me: that this organization stands for what I believe in. I took a more active role in the Connecticut chapter in 2014 to directly fight for the coast and ocean.

What are some local issues that are impacting your ocean, waves and beaches?

Unfortunately, there are many local issues and threats that jeopardize the health of Long Island Sound.

Long Island Sound is an important estuary, abutting just across from the Connecticut boundary one of the most populated regions in America, New York City. We have public access issues as well as wastewater concerns, nitrogen runoff, hypoxic conditions and water pollution problems of all sorts, including plastic.

As with the rest of the world, the pollution problem caused by single-use disposable plastic has been horrific and it must be addressed immediately. With a small group of volunteers in Connecticut and in a very short amount of time, we have removed literal tons of trash from our shores. Mylar balloons and food wrappers, plastic bags, water bottles and untold pieces of plastic smaller than 2 inches are suffocating and poisoning our local environment. Connecticut has miles of tidal grassland, and expanded polystyrene foam is particularly lethal and disturbing as it breaks into tiny balls that are hard to pick up. I'm glad to report that there are now towns taking direct action with our help to ban this insidious and unnecessary form of plastic, and we will be back in Hartford next session advocating for a statewide ban, too. 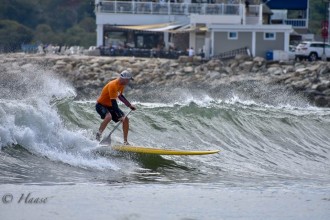 What Surfrider projects have you worked on?

I am so proud to be a part of a team that literally gets dirty! Our chapter is adamant about our monthly beach cleanups, regardless of the season and rarely are we held back by the New England weather. One of the most memorable efforts took place in February 2019, at Barn Island in Stonington, in a howling, raw, sideways driving rain. We had a bunch of Connecticut College students, motivated residents and a local trash hauling company show-up in spite of the brutal conditions. That type of drive and dedication by volunteers is inspiring. These events have a tremendous impact on educating and motivating people to take legislative action and change their own behaviors. As I tell the crew, we can't clean our way out of this mess so we must do more, and we must change consumer behaviors. Smart, common sense legislation is a perfect vehicle to get this rolling, and we've been hard at work promoting good law.

Our Connecticut chapter has had an amazing run of supporting local municipalities to pass ordinances banning single-use disposable plastic bags: from Westport to Greenwich, Stamford, Norwalk and New Canaan: we've joined with local residents and lawmakers to good effect, and we've done a pretty good job getting ink and air time with local media outlets. We've been invited to speak before legislative committees and asked to give educational talks libraries and elementary schools, all of which have been incredibly effective and rewarding. Our chapter has made plastic pollution mitigation our number one focus and the rifle shot approach has been extremely effective. We are a small group and our agenda can be overwhelming at times, but when we remain close to our core initiative, clarity and progress always follow. We are now branching out to respond to asks to help towns across the state grapple with other types of single-use plastic mitigation, like straw and foam food packaging bans. 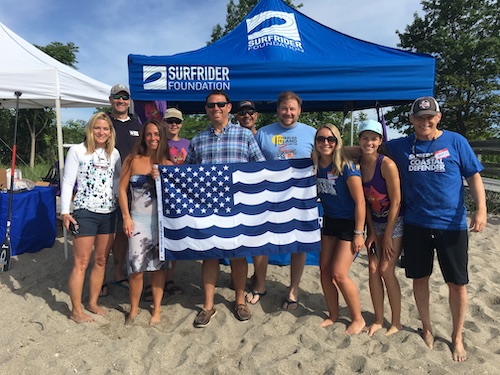 What has been the highlight of your Surfrider experience thus far?

No doubt the friendships and connections I have made. Being a core volunteer has opened so many doors and illuminated so many unforeseen paths, it is hard to list them all. The regional summits have been a highlight for sure.

Perhaps the most gratifying experience has been finding a way to expand our Surfrider presence in a state - a state with flat salty waters and no waves. Years ago our chapter held standup paddle board races in the end of the summer, and as chair, I have made a big effort to continue this pursuit to help make Surfrider more relevant and synonymous with protecting Long Island Sound, despite the lack of surfy waves. This will be our fifth year being associated with the newer iteration of the race, which is now in Milford and held on International Surfing Day each year under the title, Charles Island SUP Cup.

As race director, I have the opportunity to be reminded of an obvious but often forgotten truth… the greater effort you make the greater the reward. 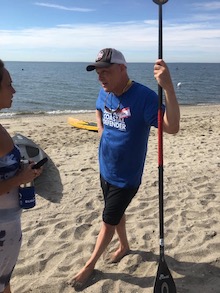 What is the most important thing you tell others about Surfrider?

As trite as it sounds, I tell others to never doubt their efforts and to always believe in the power of dedicated, grassroots efforts, as I've seen them work dozens of times in my years with Surfrider. I also like the quote attributed to Babe Ruth, “that it's hard to beat someone who never gives up.” If you can overlay that fighting spirit with your passion - in our case, love for the ocean - we will absolutely get things done and make the world a better place.

Why are you a Surfrider activist?

Initially, I joined Surfrider to offer my support for their efforts, because I love of the ocean and want to protect it. The more I became familiar with the Surfrider mission and their campaigns, the more I wanted to contribute directly with my time.