When I was asked to be the subject of an activist spotlight to highlight LGBTQ+ month in the Surfrider Foundation community, I immediately said yes to the opportunity. I am a proud, longtime Surfrider Foundation volunteer and supporter, and a proud, gay man.  When I first started surfing almost 30 years ago, and volunteering with Surfrider almost 20 years ago, I was not sure if people would be accepting in what was predominantly considered a “straight” sport. 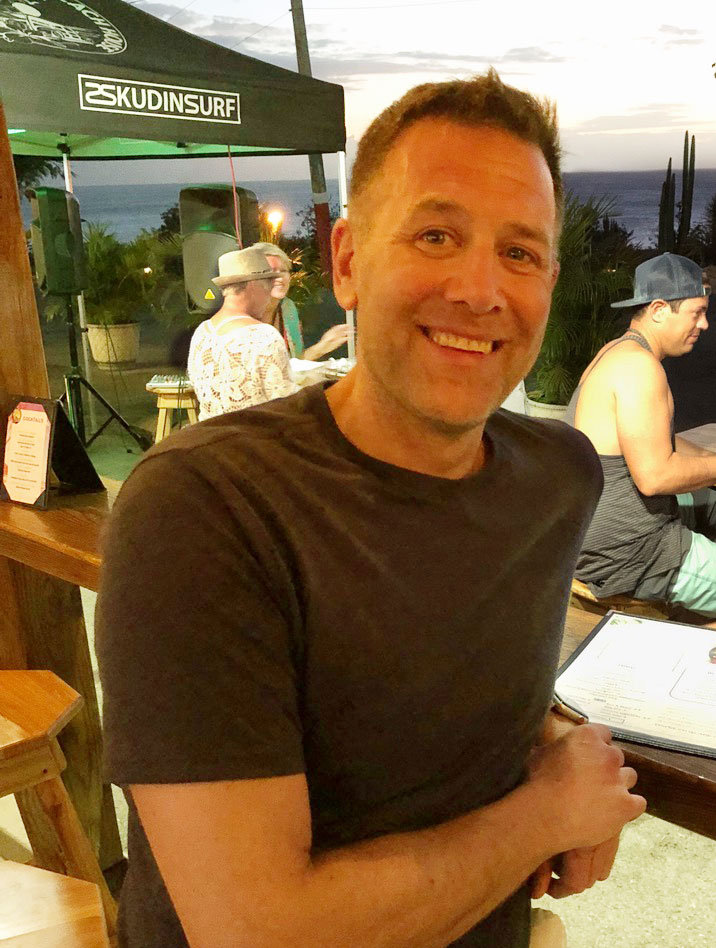 Surfing, and being involved with Surfrider, has been an important part of my life.  Surfing has guided where I choose to live (on Long Island near the beach rather than in NYC) and where I take vacations (if we’re going on a beach vacation, there must be a surf break).  My partner of almost 18 years, Darren, is resigned to the fact that most of our winter vacations will take place in Puerto Rico or Costa Rica as opposed to places where the seas are flat.  He did draw the line at El Salvador – I had to go with a group of surf buddies.  I’m working on Tortola.

Surfrider events even mark important occasions in my personal life.  Darren and I first met in the summer of 2003 and one of our first dates was attending Surfrider’s first ever Surf Movie Night fundraiser.

The knowledge that I have attained and friends that I have met over the years while working with Surfrider (both locally and with the national team) has enriched my life in many ways.  My current job as the executive director of a small not-for-profit benefits from my experience with Surfrider, and vice versa. 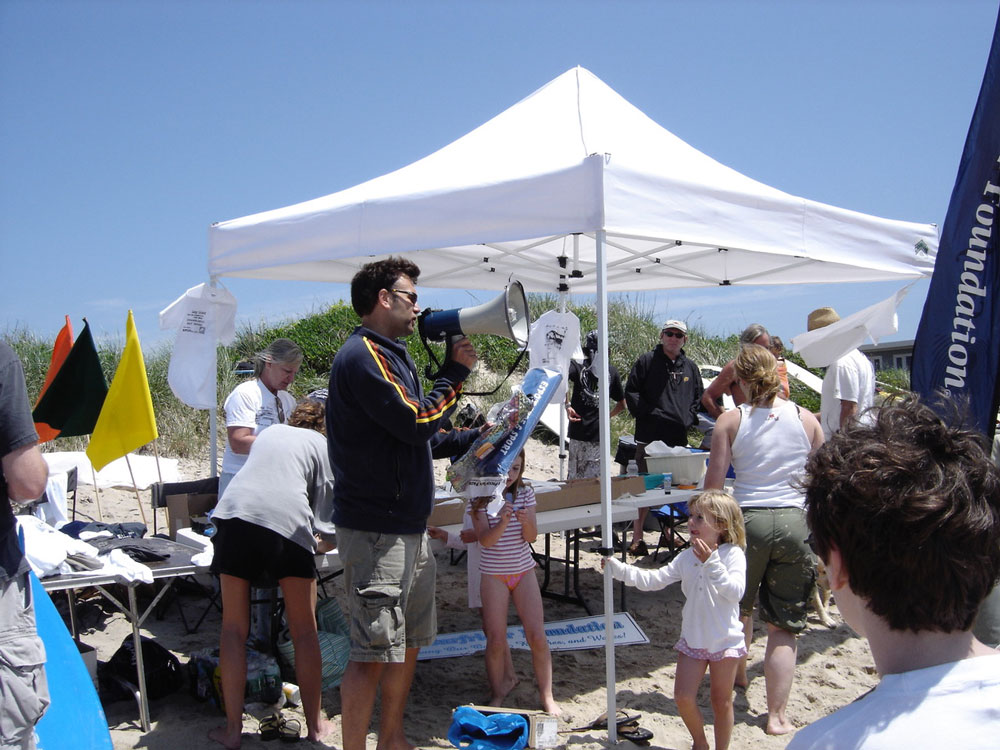 Q: What is your current job or role?

I recently finished a six year tenure as Treasurer of the Eastern Long Island Chapter.  Prior to that, I was chair and then co-chair with Mara Dias.  I’m currently working with the chapter on fundraising.

I started reading about the Surfrider Foundation in the mid-1990s in surf magazines and was immediately interested in their mission.  At the time, it seemed like more of a West Coast organization until I was introduced to the Eastern Long Island Chapter in 2003 by chapter activist Eugene Alper.  Eugene, who was chair at the time, worked hard by reaching out personally to everyone so that they were made to feel welcome and crucial to the chapter’s function and the organization’s mission.  I began attending meetings on a regular basis to learn more about the chapter’s work and how I could get involved.  That year, I attended the chapter’s first ever Surf Movie Night fundraiser and was impressed by the sense of community that Surfrider cultivated.  This year, the chapter will host our 18th annual Surf Movie Night, so I guess that makes me an official old-timer.

The chapter encompasses the area from the Moriches Inlet in Westhampton to Montauk Point.  Shoreline revetments, water quality, pollution and beach access are the majority of issues we face on Eastern Long Island. 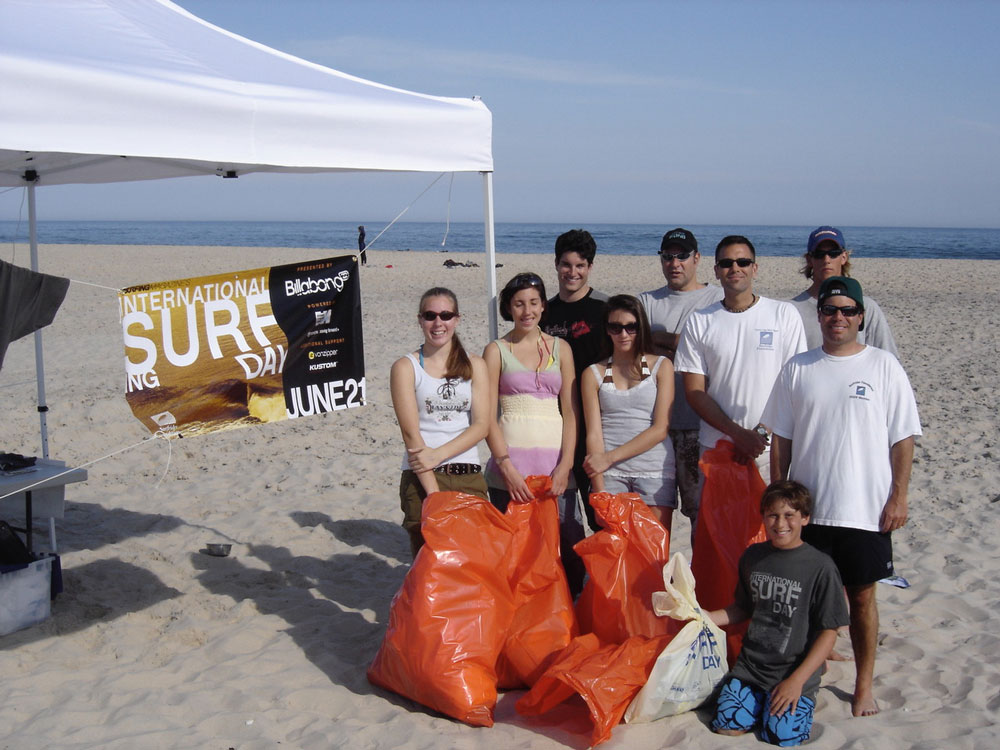 When I started working with the chapter, most of the campaigns were specific to issues taking place in Montauk, including beach access in the state’s parks and the looming rebuilding of the revetment protecting the Montauk Lighthouse.  The chapter was integral in helping East Hampton adopt their Local Waterfront Revitalization Program (LWRP) banning hardened structures on ocean beaches.  We successfully defended the Montauk Eight, 8 surfers who were arrested for surfing at Montauk Point State Park, forcing the state to allow surfing at a break known as North Bar.  We were at the forefront of opening up conversations about managed retreat which were looked upon as radical 15 years ago, but have now become more commonplace when talking about erosion.

Over the past decade, with the addition of Surfrider’s clean water programs, the chapter has grown exponentially and has been successful in effecting change throughout Southampton and East Hampton.  Our Blue Water Task Force water quality testing provides timely data to the community and our local leaders and provides a base to work toward solutions.  The Rise Above Plastics program has led to the ban of plastic straws, the intentional release of balloons in the community, and other plastic ordinances that have spread from the local towns to the county and now the state.  The chapter’s Ocean Friendly Garden in East Hampton not only works to filter rain and polluted road run-off that enters the village green, but it also sets an example for everyone on ways they can design their own landscaping to better protect the environment.  We also have our first two Ocean Friendly Restaurants – The Maidstone Hotel in East Hampton and First and South in Greenport.  We were just about to roll out more when the Covid-19 crisis started. 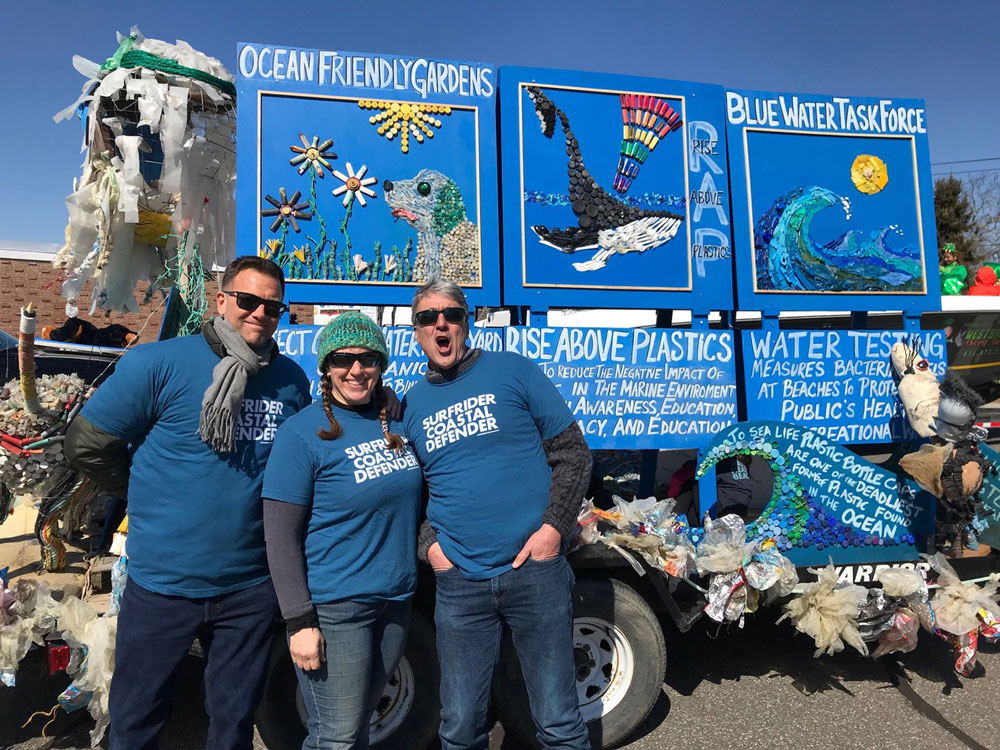 After almost 20 year of involvement, it is hard to choose one highlight.  Seeing how the chapter has grown, and how it has been transformed from what was considered a radical voice pushing for coastal retreat to become one of the most respected, go-to “beach” resources in the community gives me the most satisfaction.  Watching new volunteers morph into leaders with the tools Surfrider national provides has also been very gratifying. Ultimately, it is the sense of community you feel when attending a beach cleanup, or marching in a parade alongside a float made of trash picked up from the beach.

If I had to pick one highlight, it would have to be the interscholastic surf contest that we held in 2006 and 2007.  Students from elementary and high schools from all over Long Island came together at Ditch Plains beach in Montauk and competed as teams (something I learned while participating in Surfrider national’s Celebrity Surf Contest at Huntington Beach).  In our local contest, each participant became a chapter member and learned about Surfrider’s work as part of  the day.  In the end, it was a great experience for so many of us.  It would be great to bring this event back one day. 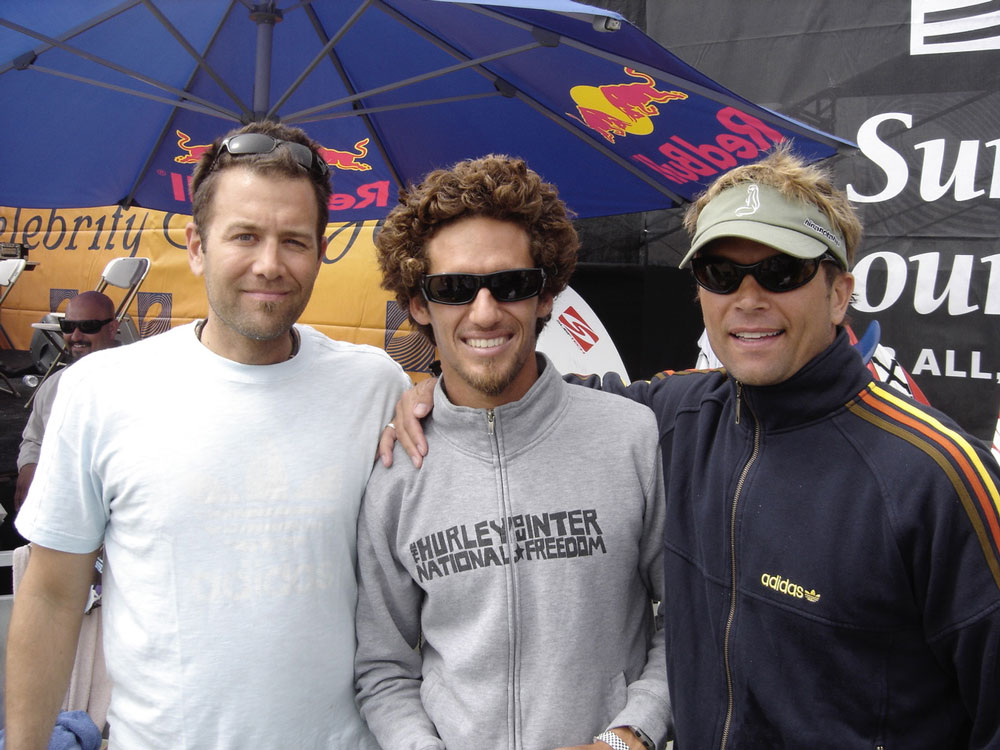 The programs that Surfrider national offers can greatly enhance a chapter.  The Eastern Long Island chapter really began to grow and gain respect in the community when we actively participated in the Blue Water Task Force Water Quality Testing program.  In addition, Rise Above Plastics and Ocean Friendly Gardens have helped to further our reach over the past five years.  I would say to anyone wanting to get involved using the tools which national provides will help build a chapter.

But most importantly, know that Surfrider is you.  Going to a meeting and making suggestions about what Surfrider can or should do is great, but in fact, it is up to each and every one of us to take on these projects because Surfrider is made up of great volunteers and doers.  It’s up to you to get involved and bring new energy and ideas to your local chapter. 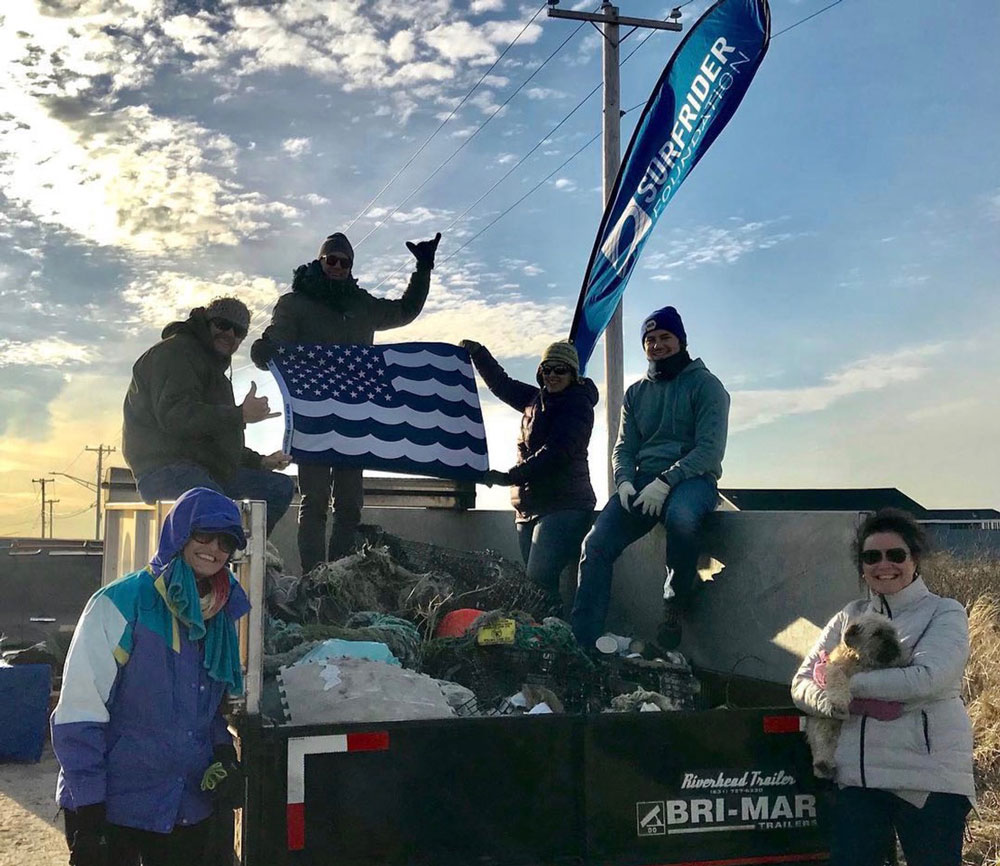 I keep going back to the mission of the organization – the protection of the world’s ocean, waves and beaches.  Drawing attention to detrimental shore hardening structures, protecting special places, ensuring beach access, clean water and ultimately a sense of community is what makes Surfrider important to me.

With each question I answered, I can’t help but to think back on all of the incredible people I met and worked with in so many capacities over the course of the past two decades.  In no particular order and my apologies if there is anyone I’ve missed: 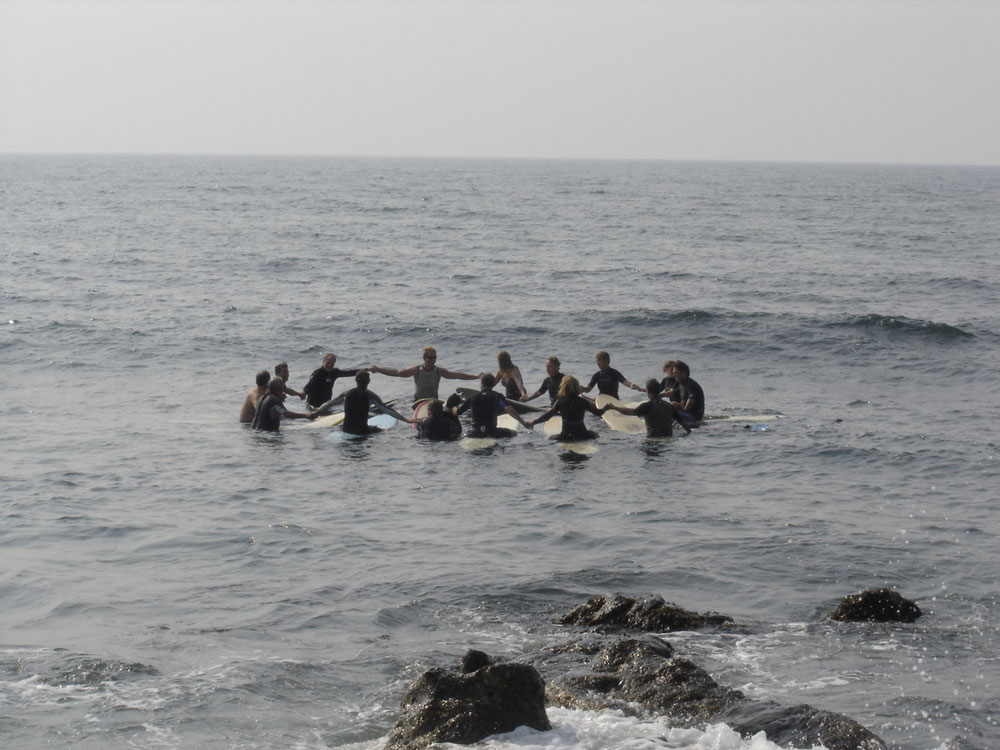