Swimming safety has long been a concern of the Surfrider Foundation regarding beach replenishment projects.  We believe there needs to be an honest discussion about the posibility of shorebreak injuries on filled beaches.  Read to the end of this brief article. 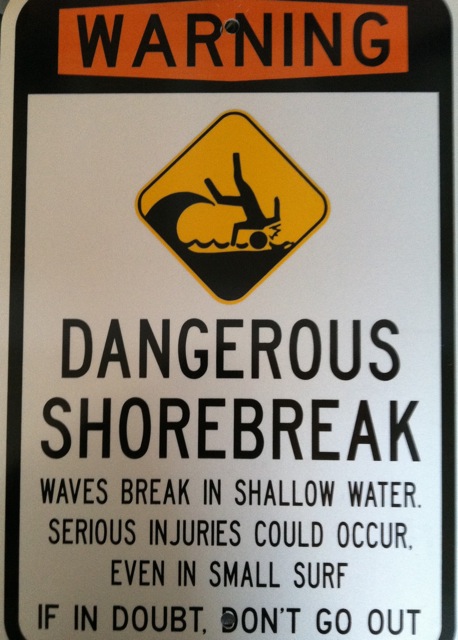 HARVEY CEDARS — Heavy surf and extremely strong rip currents being caused by Tropical Storm Emily offshore are being blamed for another day of red flag warnings, after the Beach Patrol posted the warnings for swimmers Tuesday.

The red-flag warnings were posted at 10 a.m. when the beaches opened, limiting swimming and how far from the beach that bathers are allowed to go out, according to Police Chief Tom Preiser.

“The swimming is restricted until further notice,’’ Preiser said. “There is a heavy surf and extremely strong riptides.”

He said swimmers were only allowed to go into the water up to their knees.

He said there were rough waves throughout Long Beach Island towns on Monday, but that surfers were enjoying the action at the borough’s Hudson Avenue beach..

On Friday, three people suffered head and neck injuries when rough waves caused them to crash into each other and onto the beach.

Swimming was closed on Friday at 3:15 p.m. because of the rough waves, but the beaches were opened again for the weekend, he said.

The danger on Friday was compounded by the fact that a recent beach replenishment project caused waves to break even harder just before they reached shore, he said.

Preiser said another determination would be made on Wednesday whether the red-flag warnings would be lifted.