I had the pleasure of chatting with Chris Jordan the other day and he is an inspiration.  His work has moved people in many ways and to get his insights allows you to appreciate his work on another level.  Chris is leaving today to fly to the middle of the Pacific Ocean and spend three weeks on Midway Island to get footage for his upcoming film ‘Midway’.  It's a self-financed project so please consider helping raise funds to complete the film through Kickstarter.

Midway is technically an atoll near the northwestern end of the Hawaiian archipelago.  Many people consider it to be one of the areas most impacted by plastic pollution.  The volume of plastic that washes ashore and the deadly impact to the three species of albatross that call it home has many people waving the white surrender flag for the ocean.  It has Surfrider fired up to help prevent plastic pollution and we are stoked people like Chris can help document the issue.  Here’s our discussion that covers a variety of topics from his upcoming film project to Rising Above Plastics at home.

1) What is your inspiration and what drew you to photography?

I believe deeply in the power of photography as a medium for witnessing.  We are going through a time in world history right now where we have all of these catastrophes happening that are very difficult to connect with because they have an invisible component to them.  Whether it’s the amount of trees being cut down to make paper for junk mail or the number of kids dying from starvation or malnutrition or the amount of plastic in the worlds ocean.  These cumulative aggregate phenomenon that are having a profound catastrophic effect on our world are invisible, they are spread out over millions of locations.  You can’t take a photo of the garbage patch or the destruction of our climate so it’s almost like they are not happening.  So they are kind of an abstract notion that is hard to comprehend.  I’m really interested in using photography as a tool for illustrating, documenting and witnessing these phenomenon in a way we can connect with them.

2) What originally took you to Midway?

I learned about Midway when I was studying plastic pollution for a ‘Running the Numbers’ style of work.  I heard of the garbage patch and was talking with scientists to learn exactly what is known about it and what are the actual statistics.  I was lamenting on the lack of visibility on the issue and talking about how much I wanted to create a piece that makes this issue personal to the viewers.  I think that’s one of the big cultural challenges of our time with seven billion people part of this incredibly complex system on our planet, people get disconnected.

Anna Cummins (now of 5 Gyres fame) had been stationed on Midway as an intern and said to see the garbage patch personally, go to Midway Island in the middle of the Pacific Ocean and look inside the stomachs of dead baby albatross.  My jaw dropped as she told me more about it and showed my a few snapshots on the internet at the time.  It was so stunning and horrific.  When I saw the pictures I had the same sort of tweak in my mind that I had as I saw the journalism coming out of New Orleans after Hurricane Katrina.  It had a certain character to it that made me suspect there was profound story there that was not being told.  I felt this real strong curiosity to go there and see something that no one else is witnessing. 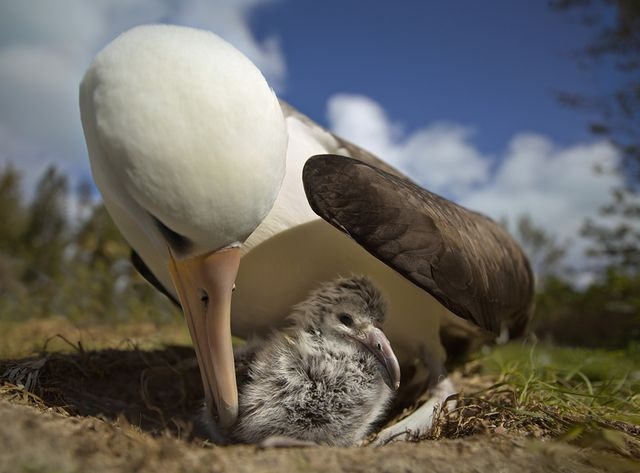 3) What do you hope to achieve with Midway film project?

It started as only a still photographic project.  At the time I had never made a film and it never occurred to me that I would make a film.  The first time I went out there I came back with still photographs and they had a kind of devastating effect on people that I did not intend and it broke my heart.  People told me they felt panicked and overwhelmed when viewing my photographs.  There’s a fine line when we witness the horrors of our world and my hope is that witnessing the horrors of the world is step one in the process of solving them.  We have to admit we have a problem and face it head on.

Facing the enormity and the complexity of the problems of the world can be overwhelming.  By connecting with what we feel personally, our pain for the world, it can be a powerful experience that gives people courage and passion.  What’s happening to our world is so devastating on some many levels that fully facing it thorough a metaphor like the dead birds on Midway can be overwhelming and can lead to despair.  That’s happened with a lot of people that viewed the images.

There was this other aspect of Midway that I realized could only be told through the language of film.  When the wind blows across the island there are hundreds of thousands albatross that take to the air and zoom in this incredible and joyful way.  The metaphor of Midway is amazing.   It’s like being exactly half way between paradise and hell.  My still photos only showed the hell part.  There’s something really powerful on that island, the juxtaposition of the beauty and horror.  That’s what led to the film project, my desire to witness both of those together so you can’t tell which one is which anymore.

4) Some of the images are gut wrenching and heartbreaking to me.  How are you able to stay composed to capture it all?

It’s a very difficult emotional and spiritual experience to be out on Midway.  When we are going to be there in a few days we are going to actually see them dying, this is the time of year when birds are dying.  We will see tens of thousands in the process of dying from dehydration, starvation and stomach punctures from plastic.  Witnessing that is incredibly painful but at the same time to capture it in a way that can tell a story is important.  We bring high-end, high-tech devices with complicated menus.  You really have to know what you are doing so it keeps me focused.  That part of me has to be in the drivers seat while at the same time I want to scream and whale and shutter in grief.  I work with a small team of guys that can hold it all together, it has been a profound experience.

5) How do you Rise Above Plastics in your daily life? 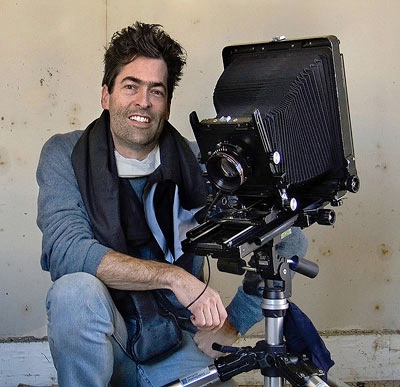 Here in our family, we have gotten ourselves off of plastic as much as we possibly can.  We use the bare minimum of plastic, especially avoiding plastic in contact with food.  Not only because plastic can be bad for the environment but it can be toxic with our bodies in many ways.  I use a bamboo toothbrush and I bring bamboo utensils when I travel to make sure I don’t have to use plastic silverware.  I have not drunk water or anything out of plastic bottles for years.  Products contained in plastic, I just don’t use plastic anymore.  The only exceptions are yogurt and cheese.  I can't seem to find yogurt in a glass container or cheese not wrapped in plastic, it’s a real bummer.

People who try to get themselves off of plastic rid of it can find it difficult because it's so ubiquitous.  I thought it would be a big sacrifice where my life would be as convenient but it has been a different experience, my quality of life has gone up.

There is nothing evil about plastic.  It’s a great substance but the way we use plastic is misguided.  It’s a substance made to last forever.  To use it to stir coffee then throw in the garbage, to use it for 6oz of water to go into a landfill or whatever has gotten us lost.  To use it for a single-use makes no sense.

It think is really important for us to make those steps be a portal to a deeper connection with ourselves to get off plastic.  At the same time my fear is that by taking these small steps it could diffuse the uncomfortable feelings we have about what’s happening in the world.  I feel so much passion for what’s happening, so much rage, anger and fear.  I don’t want those feelings to go away.  I want to turn up the volume and fully feel them.  I can see the sort of seductive power of making these little decisions like using canvas bags as a drug that softens the anxiety.  It’s important to make those steps and at the same time make an internal pledge not to be satisfied with those steps because those small steps are not enough.

6) Anything else before we RAP it up?
Please send a big joy bomb of love and appreciation out to everybody at Surfrider.  Together we will turn the ship! 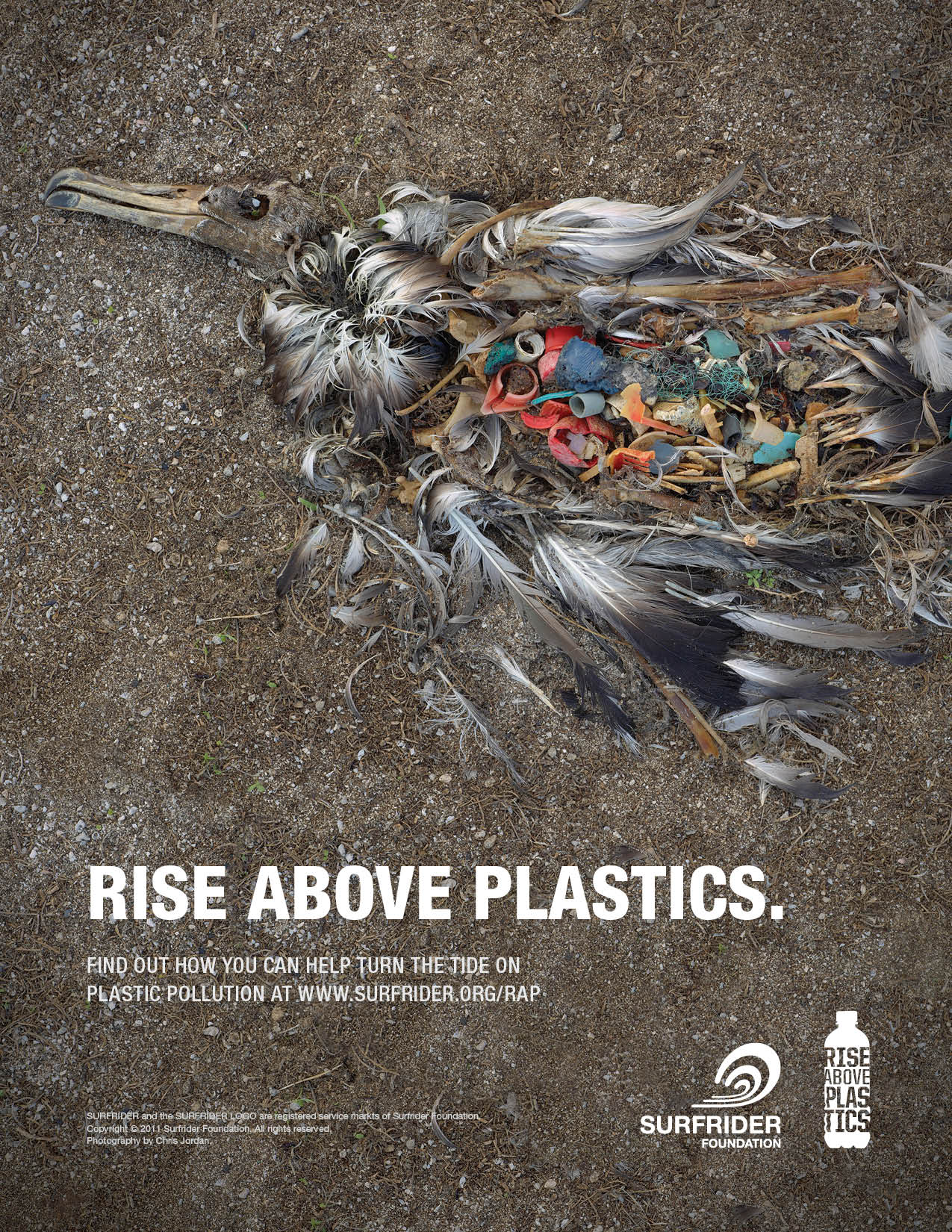