This blog highlights recent events and stories that are relevant to Surfrider’s climate change work.

Glimpse Into the Future

Yesterday morning, Surfrider Coastal Preservation staff rose before dawn to patiently track ocean tides and the rain.  We needed the weather to cooperate so we could jump in an airplane with LightHawk and fly along southern California’s coastline to observe King Tides lapping against the shore.  As mentioned in a recent blog, King Tides is an annual phenomenon that produces larger than normal tides.  Unfortunately, the weather didn’t cooperate, but we are extremely grateful to LightHawk, and pilot, Mike Jesch, who went out of their way to help capture high tides that provide a glimpse into what future sea level rise could look like.  While we did not see the tides from the air, we received word from activists on the ground that high tides did wreak havoc in some areas.  In Puget Sound tides peaked around 12 feet and swept over the railway system near Edmonds, forcing commuters to find alternative routes.  In San Francisco, water inundated the Embarcadero. 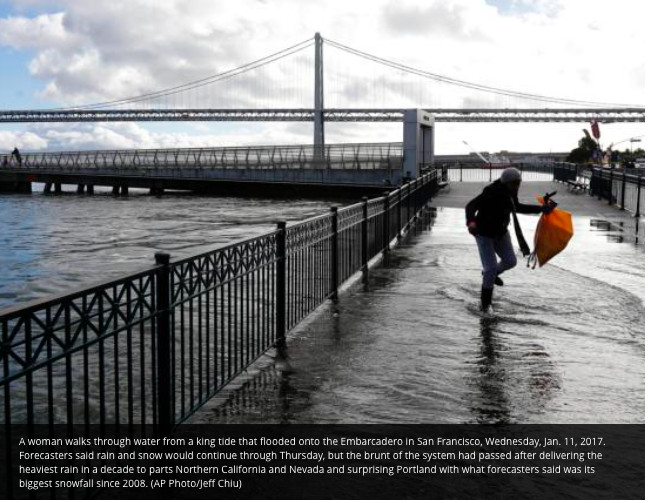 This quote by a coastal engineer perfectly summarizes why Surfrider is watching King Tides.

“This could be the norm in 20 to 30 years,” said Lesley Ewing, a senior coastal engineer with the California Coastal Commission, referring to today’s king tide, which is expected to top 7 feet, nearly twice as high as a typical high tide.  “It’s not going to be 10 days a year, for a couple of hours,” Ewing added. “It’s going to be 50, 60 days a year. (And) rather than a two-hour window of high waters ... it will be substantially longer.” 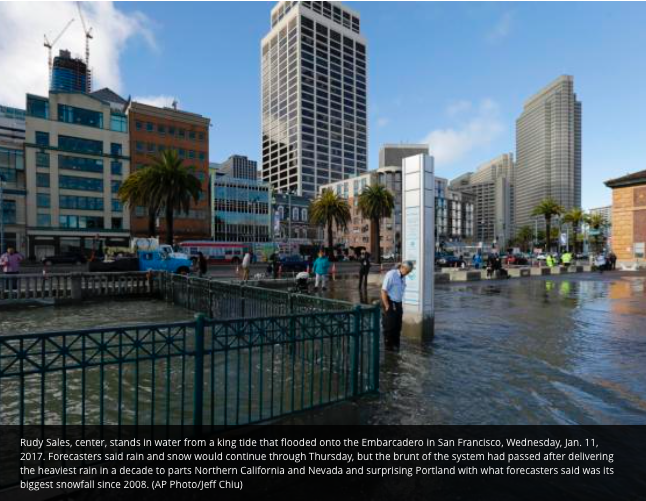 FEMA's Director Wants Capitalism to Protect Us From Climate Change

Cheers to outgoing FEMA Director who sees the value in using tough-love economics to shift how the U.S. currently responds to natural disasters and climate change impacts.  Surfrider has been arguing for years that taxpayer funds should not be used to rebuild in areas that are ‘high-risk’ and continually impacted by storms and erosion (oh, and climate change!).  Below are just a few snippets from a recent interview he had with the legendary publication Bloomberg.

“The president gave me this charge after Hurricane Sandy. He said, “Craig, the debate about climate change is over. We’ve got to start talking about how we’re going to adapt.”

“The problem with that is, it seems that we’re rebuilding the same things over and over again without substantially changing the outcome. Why? We’re looking only at past data. What about future data? What about future risk? Every time we say we shouldn’t build somewhere, developers will see a profit. They will lobby, they will get people elected. They will play the long game. And they will succeed in developing those coastal areas. The problem is, we’re subsidizing risk that allows that.”

And There She Goes….

An iceberg the size of Delaware is about ready to break off the Antarctica shelf.  In just over one month, the crack has grown an unprecedented 11 miles. It’s unprecedented because the crack grew 50 miles since 2011 (you get the math…this past month was not statistically good for the ice shelf).  And get this, only 12 miles of the ice shelf exists before it falls into the ocean.  This Washington Post validates the data and summarizes the potential long-term implications.

“If this happens, it could accelerate a further breakup of the ice shelf, essentially removing a massive cork of ice that keeps some of Antarctica’s glaciers from flowing into the ocean.  The long term result, scientists project, could be to noticeably raise global sea levels by 10 centimeters, or almost four inches.

Sea level rise is one of Surfrider’s biggest concerns about climate change, especially when considering nearly 40% of the U.S. population lives along the coast.  Scientists predict that by 2100 sea levels could rise 6ft—putting many urban areas at risk. This is precisely why Surfrider is pushing for adaptation measures to lessen the brunt of sea level rise. 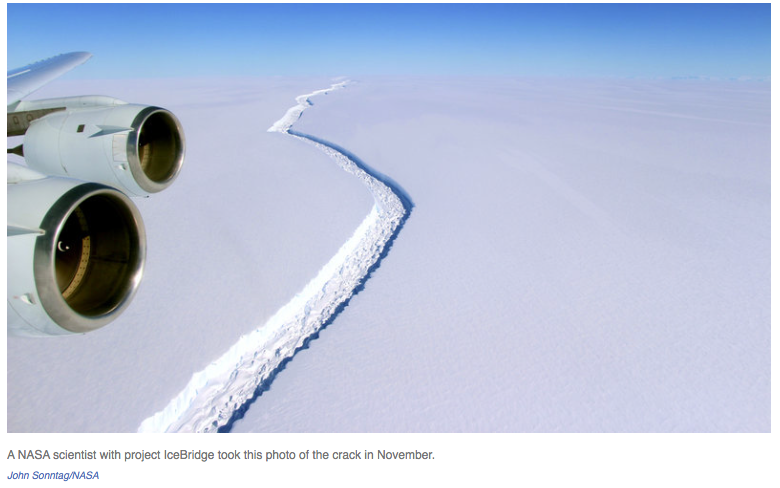 Ever Thought Climate Change Could Be Funny?!?

Check out these hilarious PSAs done by the Ontario government.  Seriously, you have to watch these. Absolutely hysterical. We can't stop laughing!!!

In Case You Missed It (ICYMI)…

Continuing with good news…did you hear that nominee Secretary of State Rex Tillerson said 'climate change risks exist' during his nomination hearings?  He also thinks the U.S. should not withdrawal from global negations to combat climate change.  Let’s just quote him: “I think it’s 190 countries have signed on,” he said before the Senate Foreign Relations Committee in reference to the accords. “We’re better served by being at that table than by leaving that table.

Find out more about Surfrider's work to address rising tides and changing coastlines or get involved with your nearest chapter at surfrider.org/chapters.