The Surfrider Foundation has an ally in the Environmental Protection Agency (EPA).  Following years of advocacy by the Surfrider Foundation, earlier this week the EPA ordered the Hawaii Department of Health (HDOH) to post warning signs of polluted waters near Waiopili Stream at Mahaulepu Beach.  In a strongly worded letter sent July 25th from EPA Region 9 to HDOH’s Clean Water Branch, the EPA says HDOH must post warning signs alerting the public of polluted coastal waters in the state.

More particularly, in 2015, Kaua’i’s BWTF testing indicated seven coastal streams (at the mouths of the streams where they meet the ocean) that were polluted over 90% of the time Surfrider tested them. Four of these popular beach recreation sites failed to meet Hawaii’s water quality standards every single time they were tested.  The most egregious site is at the mouth of the Waiopili Stream, at Mahaulepu Beach, in southern Kaua’i, where bacteria counts exceeded health standards one hundred percent of the time, at nearly 300 times the standard for the fecal indicator bacteria Enterococcus.  Yet, despite numerous, repeated requests by Surfrider for HDOH to post public notification of this health risk (including emails from Surfrider activists via our action alert system), HDOH has failed to post warning signs at the beach, nor given any other functionally equivalent notification as required under federal law.

Meanwhile, HDOH’s own water quality monitoring data also shows that Waiopili Stream exceeds the State’s recreational water quality standards, at magnitudes of up to 40 to 50 times the standard.  And yet, the state fails to post, and in fact, instead, essentially dismissed its own data in its March 2016 “Waiopili Ditch Sanitary Survey,” wherein HDOH wrongly concluded that posting along Waiopili stream is not warranted.

Thus, while continuing to urge the HDOH to post, Surfrider also elevated its concerns to the EPA, which oversees the national BEACH Act grant program, for coastal water monitoring and pollution notification.

The BEACH Act requires grant-receiving states to monitor coastal recreation waters and promptly notify the public when bacteria levels exceed or are likely to exceed state water quality criteria.  Specifically, as a condition of receiving grants, state programs must include measures for posting signs at beaches, or functionally equivalent communication, that lets the public know that certain waters are or are likely to be polluted.  EPA’s BEACH Act guidance provides that signage, posted directly at beaches or beach accesses, is the most direct way to provide notification at the beach.

After communications with the head of EPA’s Region 9 Water Division, where Surfrider expressed our concerns about HDOH’s failure to post, EPA agreed.  In its July 25th letter, EPA notes that as a recipient of a BEACH Act grant, HDOH is required to post signage at polluted beaches, and that HDOH’s own data show health standards exceedances.

“Regardless of the source, elevated enterococcus levels can pose a potential public health risk to people who recreate in the impacted water […] In order to protect public health, Hawai’i DOH must post a sign informing the public that the water flowing across the beach does not meet Hawai’i’s recreational water quality standards.”

EPA’s letter is not limited to concerns over posting at Waiopili Stream, but also expresses a desire to discuss HDOH’s posting policies statewide.

Meanwhile, EPA also expressed “significant concerns” with HDOH’s Sanitary Survey, including that its conclusions are “not appropriately supported or contradict existing data.”

Surfrider is happy to have an ally in the EPA and will continue to attempt assisting HDOH with its BWTF citizen science program data, and work to ensure HDOH complies with the BEACH Act and this EPA directive, and promptly posts pollution warning signs at Waiopili Stream and other polluted beaches around the state.  The children and families who recreate at these beaches deserve it.

For more information, check out this recent news coverage on Hawaii News Now.  And to learn how you can get involved in protecting our ocean, waves, and beaches, check out the Kaua’i Chapter's website here.

UPDATE:  Surfrider is very pleased that one week following EPA's order, on August 4th, HDOH posted a pollution warning sign at Waiopili Stream, and additionally posted a warning sign at the polluted Keehi Lagoon on Oahu.  While there are still many more polluted streams of concern which need to be posted in Hawaii, Surfrider is pleased that HDOH has acknowledged its obligation to post under the BEACH Act, and has taken action to protect beachgoers who otherwise wouldn't know of the serious health risks of playing in these waters.  Surfrider will continue working with HDOH to get all polluted coastal recreation waters posted. 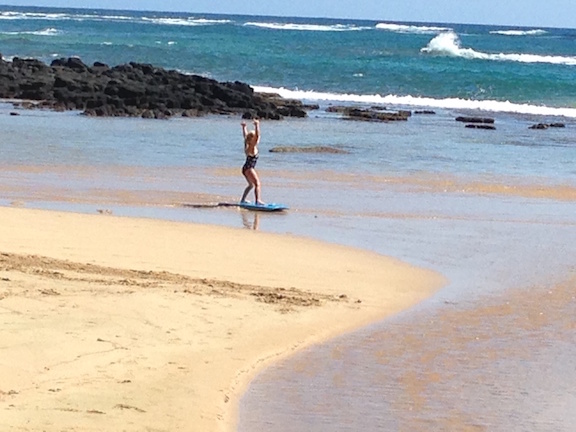