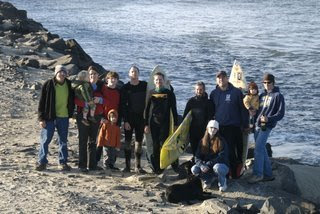 In August of 2007, the Oregon Chapter of the Surfrider Foundation filed a motion of intervention with the Federal Energy Regulatory Commission (FERC) for the Florence Wave Energy facility proposed by the Australian company Oceanlinx. This motion (the first ever filed in the world by Surfrider) was brought about by concerns raised by local ocean users of the Florence Organizing Committee who wished to have a formal seat at the table when discussions moved forward in the planning process. Major concerns included the proposed size of platforms, their location and it's likely impact on existing recreational uses, reductions in wave height, alterations of sediment transport, as well as impacts to aesthetics, public safety, and potential environmental impacts such as electromagnetic fields. The Surfrider Foundation supports finding new ways to harness renewable energy, as long as local needs and impacts are taken into proper consideration and steps are taken to avoid degradation of cultural rituals. After nearly 9 months had gone by since Oceanlinx had filed its preliminary permit application, and zero public outreach and stakeholder involement had been initiated, the company decided to withdraw their permit from consideration by FERC. For those who love surfing the south jetty, fishing and crabbing in the nearshore waters, or a nice stroll along the beach to view a beautiful Pacific sunset, this news was a major victory! This victory will serve notice to any gold rush dreamers that we here on the Central Oregon Coast stand ready to defend our oceans, waves, and beaches for the use and enjoyment for all people. (photo by Stiv J. Wilson)