Governor Rick Scott declared a State of Emergency in St. Lucie and Martin Counties on the Atlantic Coast of Florida today in response to massive blue-green algae blooms that are covering the St. Lucie River and contaminating area canals, estuaries and ocean beaches. A county-wide beach closure was imposed earlier this week in response to the blooms.  While some beaches have since re-opened, fear and disgust at even breathing in the foul-smelling air near these blooms are keeping people away from the beach and coast, and local businesses are already suffering.  Media coverage here.

7/1/16 Update:  In response to the State of Emergency Declaration yesterday, the South Florida Water Management District announced these measures to lessen the impact of of lake releases of polluted freshwater and local basin stormwater runoff on toxic algae bloom conditions at the coast.  The District will release less water from the north into the Lake and increase discharges to the south, while the Army Corps will decrease the discharges of freshwater going into the St. Lucie and Caloosahatchee Rivers from 1,800 cubic feet per second to 1,170 cubic feet per second.  This will mean less polluted water making its way to the Treasure Coast, but more sweeping reforms are needed to restore the flow of freshwater from Lake Okeechobee south throught the Everglades and into Tampa Bay in order to prevent another ecological and pubic health disaster.  Full update on the Palm Beach County Chapter's Facebook page, whose volunteers are on the lookout area for signs of algae blooms spreading into their area.

A rally is also being organized for this Saturday in Stuart, FL by Citizens for Clean Water, an advocacy group based on the Treasure Coast.  The event will bring together the community in protest against the polluted discharges from Lake Okeechobee.  Participants will join hands in the sand to send a message to their elected officials that they have had enough. Event info here. 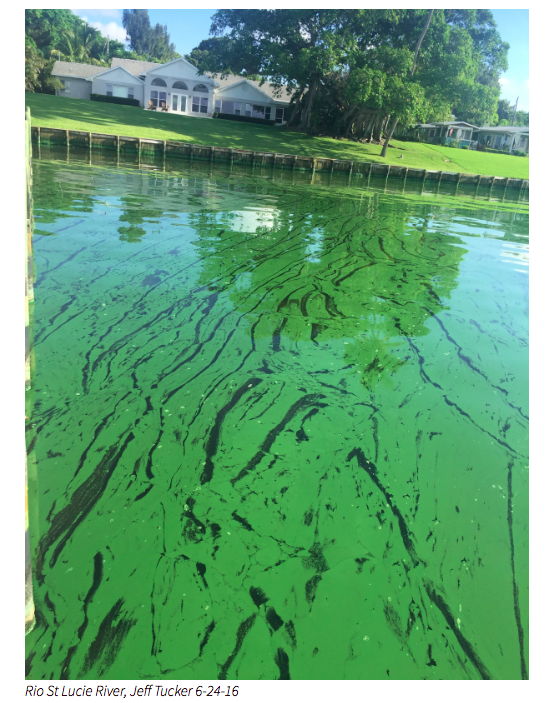 Blue-green algae blooms are caused by microscopic organisms called Cyanobacteria that are usually present in fresh and marine water environments. Under favorable conditions of sunlight, temperature, and nutrient concentrations, they can form massive blooms that discolor the water and often result in scum and floating mats on the water’s surface. Some species of cyanobacteria produce toxins that can cause health problems in humans and animals, including rashes and blisters, eye, nose and throat irritations, and inflammation of the respiratory tract. Swallowing water containing high levels of toxin can lead to nausea, vomiting, abdominal pain and diarrhea. Effects on the liver and nervous system of animals and people have also been documented in severe cases. Livestock and pet deaths have occurred after these animals consumed toxic algal scum.  Basically, these blue-green algae blooms are bad news and people are smart to keep away.  Learn more here.

The devastation along the coast is well documented in several visually disturbing images and video on the Indian River Lagoon Blog.  Photo credits: Ed and Jacqui Thurlow-Lippish 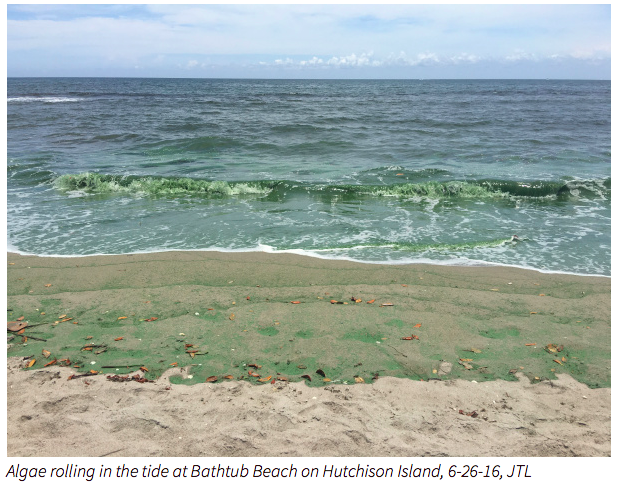 Why did these recent blooms happen in Florida?

This recent outbreak of blue-green algae is directly related to managed discharges of contaminated freshwater from Lake Okeechobee into the St. Lucie River.

Lake Okeechobee is the largest freshwater lake in the state of Florida. Historically, whenever Lake Okeechobee overflowed its natural banks, a sheet of water flowed south into the  Everglades. However, the U.S. Army Corps of Engineers built the Herbert Hoover Dike, a series of levees, culverts, and locks to encompass the lake, including 67 miles of dikes along the southern shore, after a large storm in 1928 caused widespread flooding. Today, in order to maintain water levels in the Lake, water is discharged, both in low- and high-volume releases, and sent destructively “to tide” through canals and estuaries to the east and west, which has a major ecological impact on the St. Lucie River, Indian River Lagoon, and Caloosahatchee Estuaries.  In wetter years, more water is released, in drier years, less.  These discharges can even effect the Loxahatchee River and beaches near where it discharges through the Jupiter Inlet in Palm Beach County to the south. Read more here:  www.ecomagazine.com

Not all the blame should be placed on the Army Corps though.  The State of Florida has squandered away voter-supported funding opportunities to restore overflow from the Lake to the south through the Everglades and eventually Tampa Bay where the aquatic ecosystems there desperately need the influx of freshwater.  Additional sources of nutrients that help fuel the blue-green algae and other harmful algae blooms (HABs) are stormwater runoff in urban areas (lawn chemicals and animal waste), agricultural runoff and septic systems that leach nitrogen and phosphorous into ground and surface waters.  Florida suffers more than most states from HABs, but their prevalence and persistence seems to be increasing in coastal areas up and down the coast.  Learn more about the harmful impacts of HABs at www.cdc.gov.

The Surfrider Foundation Chapter in Palm Beach County has for many years been concerned about the harmful impacts algae blooms are having on their local water quality, public health, and beach-tourism based economies.  They have actively supported efforts to stop dumping Florida’s precious water into the coastal estuaries and out to sea via the St. Lucie and Caloosahatchee Rivers.  They have supported legal action and other means to restore the historic Everglades flow to Florida Bay, including efforts by Earthjustice, David Guest and Richard Grosso.

The Chapter bemoans the fact that Amendment 1, passed by Florida’s voters years ago to buy conservation land for such things as water storage and natural filtration so overflow from Lake Okeechobee can be sent south through its historic flow through the Everglades has never been implemented. Florida’s legislators and governor decided to use the money instead for other things than intended by state voters.  Recently the legislature also voted to allow sugarcane farmers to police their own water quality.

Although the recent toxic algal blooms are unprecedented, 16 years ago Florida’s DEP declared that the C-51 canal in Palm Beach County was an “Impaired Waterway”, subject to harmful algal blooms.  Now things are much worse.

The Palm Beach County Chapter is trying to raise public outcry over recent events to call out the Big Sugar and Big Ag polluting industries and their politician friends.  Until things change at the state and federal level, we can expect more destruction of Florida’s most beautiful places.  Tune into their Facebook page for updates and important local numbers and hotlines.