Last month the state legislature passed the nation’s first ever statewide ban on sunscreens that contain chemicals oxybenzone and octinoxate, which are known to harm coral reefs and local fish. Today, the governor of Hawai'i signed this bill into law, which will require that every Hawaiian island stops selling sunscreen that contains these two chemicals by January 1, 2021.

The Surfrider Hawai'i chapters have been advocating for this type of coral reef protection for years. This has included spreading information and awareness about the issue to local communities, hosting events with lead ecotoxicologist of the Haereticus Environmental Laboratory, Dr. Craig Downs, and partnering with local scientists from the Hawaii Reef and Ocean Coalition, including Surfrider Oahu’s 2017 John Kelly Lifetime Achievement Award winner, Dr. Bob Richmond.

While these chemicals are effective UV blockers and can help reduce the negative human health impacts from sun exposure, at high concentrations octinoxate and oxybenzone act as endocrine disruptors and become toxic to fish and corals. Impacts can include fish deformities and the impaired health of coral polyps (the building blocks of coral reefs), which exacerbates the rate of coral bleaching. Bleached coral prevents the reef’s ability to act as an important nursery and feeding ground for hundreds of marine species. Damaged ecosystems also lose the benefits provided by healthy, functioning reefs, such as coastal protection from storm surge, and recreational value from snorkeling, scuba diving and wildlife viewing.

Popular Hawai'i beaches experience high concentrations of sunscreen in coastal waters year-round! After arriving on the islands, tourists often hit the beach to explore the coastal beauty, including a once thriving marine environment and reef ecosystem. For instance, Hanauma Bay experiences about 2,600 visitors daily. In an effort to protect their skin from the sun, thousands of people lather on different types of sunscreen before jumping into the ocean. Unfortunately, that sunscreen doesn’t stay on the skin, and it’s estimated that 14,000 tons of sunscreen enter the world's marine waters every year. 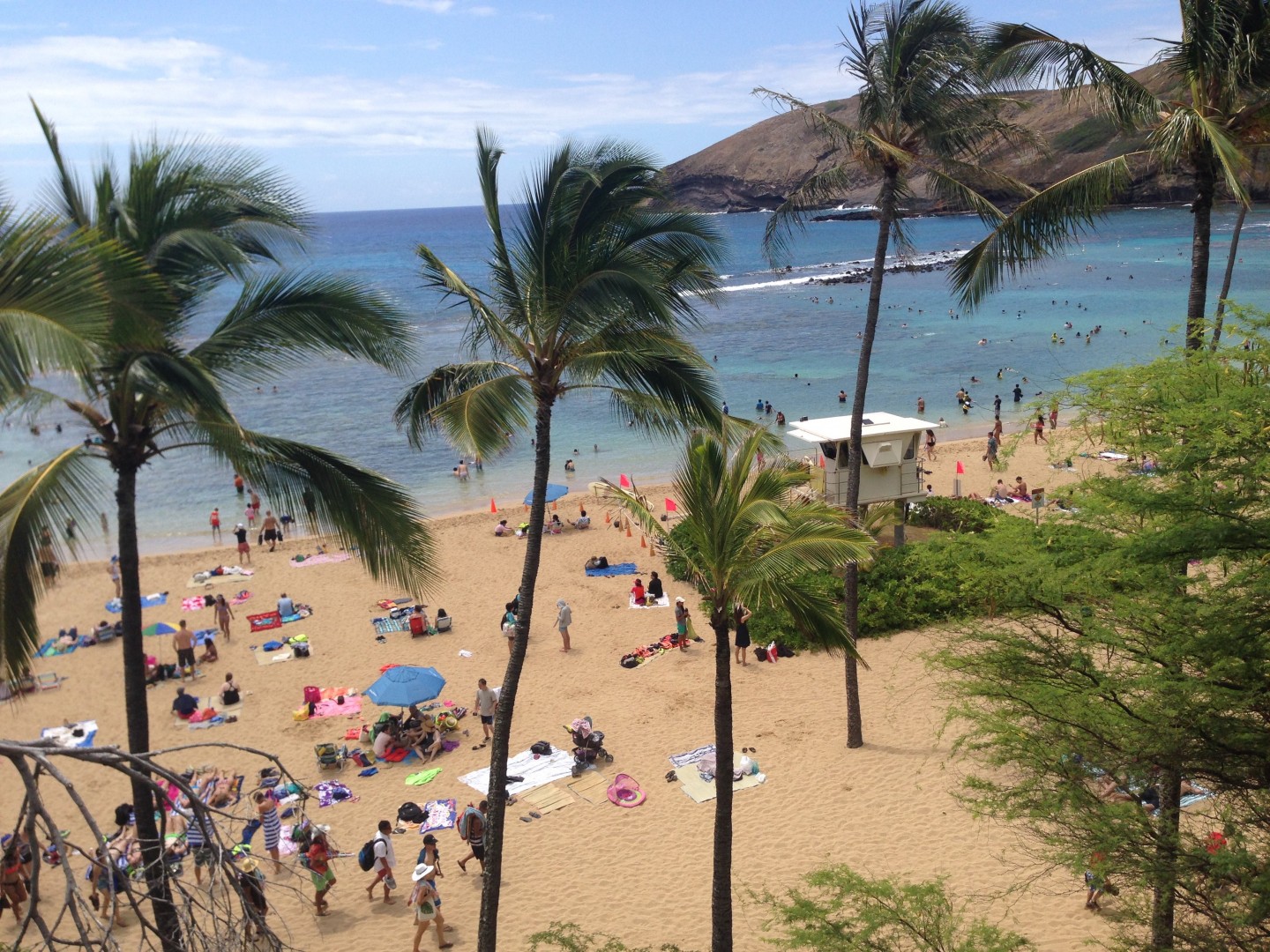 Photo of a classic day at Hanauma Bay on O'ahu, Hawaii

Even if beachgoers just sunbathe on the beach, studies have found that sunscreen can leach from the skin when showering. An after-beach rinse can send those chemicals down the drain, pass through the wastewater treatment facility, and enter the marine environment through ocean outfalls.

In 2016, scientific panels held at the International Coral Reef Symposium and the International Union for the Conservation for Nature in Honolulu both showed a consensus that oxybenzone is toxic to corals and recommended a ban on sunscreen products that contain it.

So next time you hit the beach, whether you’re in Hawai'i or not, be sure to take alternative actions to protect yourself from the sun. This includes avoiding direct sun exposure during the most intense hours of sunlight (10 am - 2 pm); covering up with UV protective gear like long sleeve shirts, hats, and rashguards; and opting for a more reef friendly sunscreen option like micro-sized zinc oxide. Check out our supporter TropicSport for a great sunscreen that helps protect the reef while also giving back!

Surfrider Oahu pose with Governor Ige and Hawaii Reef and Ocean Coalition at official signing ceremony of the world's first ban on suncreens with oxybenzone or octinoxate!

Update July 23, 2018: The original statistic on sunscreen that enters the marine environment sourced from Honolulu Star Advertiser has been updated for accuracy.