Last week, a New York judge issued an opinion upholding the New York State Bag Reduction Act and finding that the ban applied to all plastic bags, including reusable bags made from plastic film and plastic fabric (i.e. ChicoBags). As part of the plastic pollution reduction work of our New York chapter network, Surfrider has been a leader for almost a decade in pushing for adoption of plastic bag laws, led by the  New York City Chapter which was a founding member of the Bag It NYC Coalition.

With the passage of NYC's bag law in 2016, the moratorium adopted by the state legislature shortly thereafter, the passage of the state bag law, then the lawsuit, it has been a bumpy road to this victory, in particular. After full enforcement of the law in New York State, we anticipate a dramatic reduction of plastic carryout bag litter on our streets and beaches.

The New York State Bag Reduction Act was adopted as part of the 2019 budget with an implementation date of March 1, 2020. However, exactly two days before implementation a plastic bag manufacturer, Poly-Pak, filed a lawsuit that temporarily blocked implementation and sought to permanently restrain the state from enforcing the Bag Reduction Act. Poly-Pak manufacturers fim plastic, including film plastic bags that are 2.25 or 4.0 mils thick that are allowable as reusable bags under some state laws, but not under New York law. Poly-Pak was joined by an owner of a supermarket and a corner store, as well as a bodega association.

Here is a summary of the four losing claims in the lawsuit:

The Petitioner also claimed that the Bag Regulations are ultra vires (acting beyond one's legal authority) since they are inconsistent with Bag Reduction Act's provisions. The DEC issued Bag Regulations banning all film plastic (under 10 mils) and allowing for reusable bags made from plastic fabric. The text of the Bag Reduction Act adopted by the Legislature bans all plastic bags and does not list “reusable bags” as an exemption to the ban. The court ruled that the DEC’s allowance for reusable bags made from certain plastic (a.k.a. plastic fabric) is in contravention of the plain dictate of the statute and any provision of the regulations that do so are ultra vires. The court issued a permanent injunction on implementing or enforcing Bag Regulations with regard to exemption for reusable bags made from plastic fabric. This ruling means that, except for exemptions like garbage, newspaper, garment, and restaurant take out bags, all plastic bags are banned from being sold or given away in New York State shops, bodegas, and grocery stores.

The only reusable bags allowed under the New York Bag Reduction Act must be made from non-plastic material — including cotton and canvas — making it the toughest definition of reusable bag in the country by far. 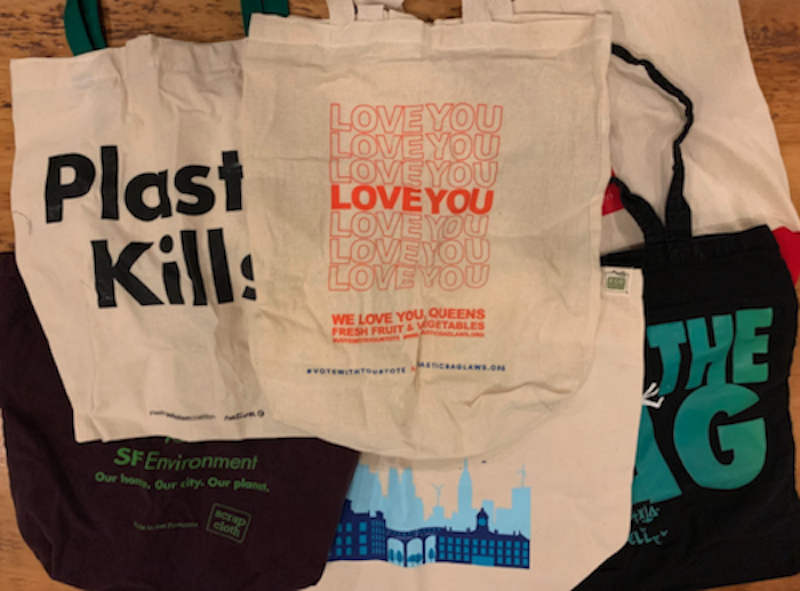 The DEC issued a statement last week that it will provide the necessary 30-day notice to stores and businesses that the state will soon start to enforce the ban, which will likely be late next month.

“The Court's decision is a victory and a vindication of New York State's efforts to end the scourge of single-use plastic bags and a direct rebuke to the plastic bag manufacturers who tried to stop our law.” said DEC Commissioner Basil Seggos. “DEC encourages New Yorkers to transition to reusable bags whenever and wherever they shop and to use common-sense precautions to keep reusable bags clean.”