The Kauai Chapter’s Blue Water Task Force volunteers braved storm conditions last Saturday to collect water samples after heavy rains had saturated the island for over 24 hours on November 10th.  All of the stream and rivers around the island were pouring brown water runoff into the ocean, and flooding along the northern part of the island closed roads and prevented the volunteers from reaching some of their regularly monitored sites.  Brown Water Advisories (BWAs) issued by the Hawaii Department of Health (HDOH) covered many beaches on Kauai warning people to stay out of the water.  See all current beach advisories in Hawaii on the HDOH Clean Water Branch’s website here.

Brown Water Advisories issued by HDOH warn - Rain has resulted in stormwater runoff entering into coastal waters. The public is advised to stay out of flood waters and storm water runoff due to possible overflowing cesspools, sewer, manholes, pesticides, animal fecal matter, dead animals, pathogens, chemicals, and associated flood debris. Not all coastal areas may be impacted by runoff, however, if the water is brown stay out. Continue to practice good personal hygiene and follow-up with your primary care physician if you have any health concerns.

As it turned out, the test results collected by the Surfrider volunteers showed extremely high and dangerous levels of fecal indicating bacteria at most of the sites tested during last weekend’s heavy rains.  Four sites, two located where streams discharge onto the beach and into the ocean and another two out in the surf zone exceeded the maximum limit that the tests can record of 24,196 enterococcus bacteria per 100 ml seawater.  The State uses a bacteria limit of 130 enterococcus to issue health advisories to warn the public of high bacteria levels and potential health exposure.  Last weekend, seven of the sites tested by Surfrider were 100X higher than that health standard, and only 5 of the 31 sites tested were below the health standard and considered safe to swim.

Generally, state testing is suspended while Brown Water Advisories are active, so the extremely high bacteria levels measured by the Kauai Blue Water Task Force are eye opening indeed! These alarming results made the front cover of Kauai's local newspaper - TheGardenIsland.com.  Visit the Blue Water Task Force website to see a map of all sampling sites monitored and all water quality data generated by the Kauai Surfrider Chapter.

While the HDOH maintains an excellent website where the public can go to view the State’s water quality results and any active Brown Water or Sewage Spill Advisories, many people are not aware of this resource or know to check it before they go to the beach.  Posting a physical sign at the beach, warning people as they enter the area, is the best way to notify the public and prevent any potential exposure to polluted water that could cause them to get sick.  Surfrider will continue to work with the Clean Water Branch to help them build awareness in residents and tourists alike of the dangerous conditions that exist when Brown Water Advisories are issued and to facilitate the posting of signs at the beach during rain events and at beaches where bacteria levels are nearly always high where polluted streams discharge into the ocean.  People need to know this important information so they can take steps to protect their families health. 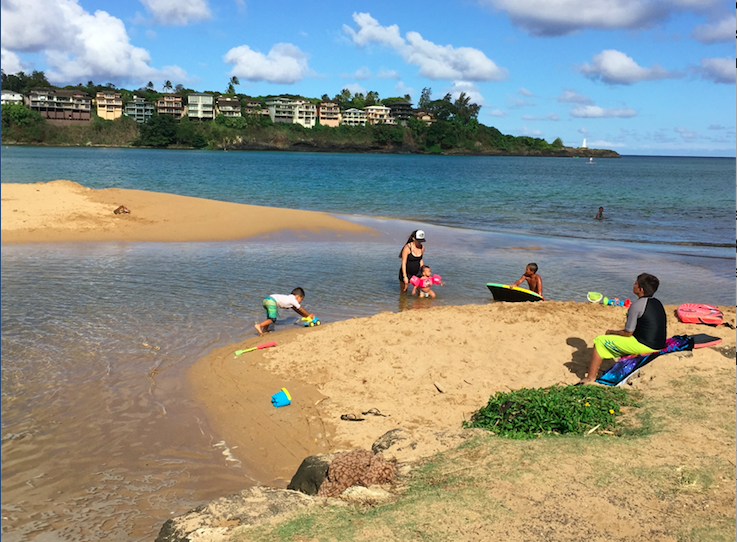