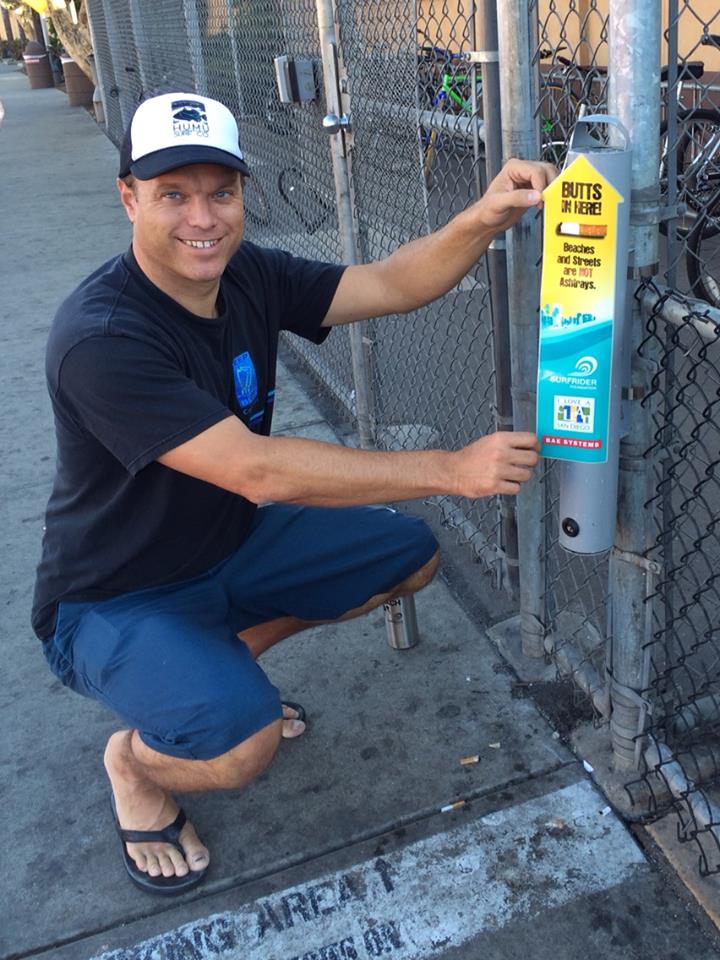 Meet Roger Kube, a passionate and dedicated activist, from our San Diego County Chapter in California.

Q: Why and when did you get involved with the Surfrider Foundation? How long have you been a member and volunteer?

In the spring of 2009, my son Austen needed to do community service as part of his middle school curriculum. We decided to participate in our first Surfrider hosted beach cleanup in Ocean Beach, San Diego.  It was a beautiful Saturday morning, clear blue skies and we were having a great time together. We were walking the beach picking up trash, Austen stopped and looked up at me with his innocent eyes and asked, "Why don't we do this more often?" I paused, and replied, "That's a good question. Let's start doing more." And so my son's comments that morning got me thinking that while I had been an environmental activist for as long as I can remember, I hadn't been active for a number of years in actually protecting our environment, outside of my own personal footprint.  I decided it was time I get busy again. And that was the catalyst for my involvement with the Surfrider Foundation. I went to my first Chapter meeting and asked what I could do to help, and I've been a member and active volunteer with the Surfrider Foundation ever since.

There are a lot of issues that impact our oceans, waves and beaches in San Diego County. You will find most of them on any urbanized coastline in the world; marine debris (mostly plastic & cigarette butt pollution), urban runoff and its impact on ocean water quality, beach access issues, beach replenishment projects that impact surf breaks, seawalls that make our beaches disappear, fresh water management issues, climate change and resulting sea level rise, and more. The San Diego County Chapter has nine active programs and hundreds of Core Volunteers working to address these issues.

I helped lead our Hold On To Your Butt Campaign's "Ashcan Program" in 2010-11. This was my first leadership role in Surfrider Foundation. In one form or another, I was involved in the installation of more than 200 ash can receptacles and the distribution of over 10,000 pocket ashtrays since 2010.

Since 2012, I have been heavily involved with our Rise Above Plastics program. I have been the lead or involved with numerous RAP policy initiatives; 1) Solana Beach Bag Ban, 2) Encinitas Bag Ban, 3) Solana Beach Polystrene Foodware Ban, 4) SB270, 5) City of San Diego bag ban (1st reading this summer!). I was also part of the core Rise Above Plastics group that helped develop and launch our Ocean Friendly Restaurants (OFR) Campaign. In 2015, I helped our partner organization in Tijuana, Proyecto Fronterizo, acquire $70,000 in EPA grant funds to develop and launch their own version of Ocean Friendly Restaurants, the "Restaurantes Amigo del Mar" campaign.

In 2015, vacating the Executive Committee, I stepped into a leadership role as Co-Chair on our No Border Sewage (No BS) Program. The program was dormant in 2014 due to a leadership gap. Since that time, the committee has grown to over 20 active core volunteers and has reestablished itself as an influential stakeholder. Finally, work on the No BS Committee led me to spearhead efforts that resulted in the formation of our a new Surfrider Baja Chapter, in an effort to help address our bi-national border region issues in Mexico.

This is very difficult to answer, as there are have been so many highlights in my Surfrider experience. There have been a lot of campaigns and victories. When (not if!) the San Diego bag ban passes (expected Council vote in July), this will probably be my biggest highlight in terms of a victory, as I've been lead and working on this project since 2011. However, I think the biggest highlight of my time with Surfrider is the relationships, my Surfrider network and family. One of the biggest joys in my activism with Surfrider is having the opportunity to surround myself with some of the most passionate, dedicated and inspirational people I've ever known.

That we are a grassroots organization made up of local community citizens volunteering our time and energy to the protection of our oceans, waves and beaches. The Surfider Foundation model is a very effective vehicle for positive change.