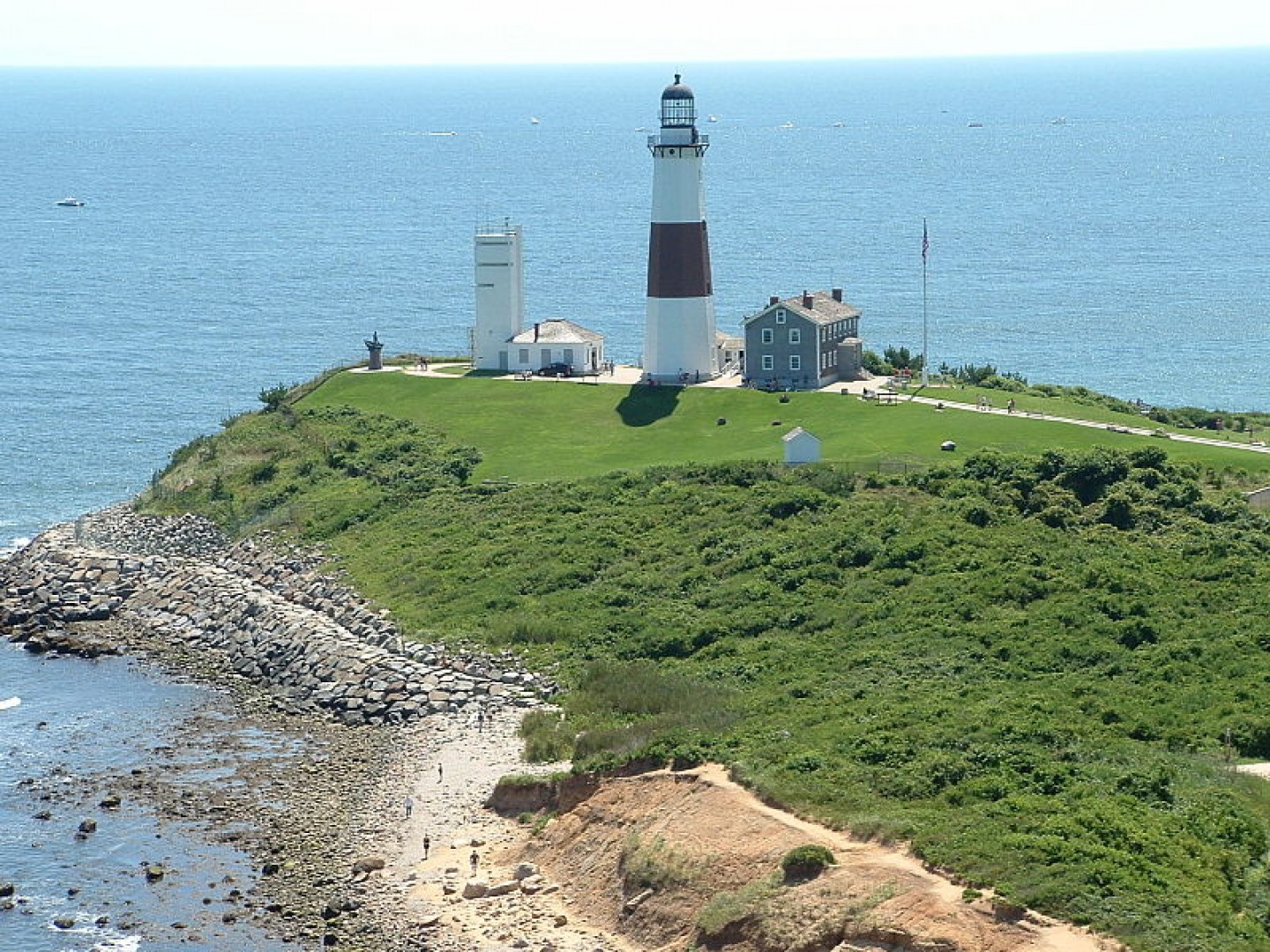 Montauk Point is steeped in rich history.  The land was originally home to the Montaukett Native American tribe. During the war-torn days of the American Revolutionary War, the land bore witness to struggles between the British and Americans.

While the lighthouse has weathered the ‘ups and downs’ of history, there is a longstanding debate about the best way to manage the land at Montauk Point and East Hampton. The Army Corps believes more coastal armoring (seawalls, geo-tubes, etc.) will prevent erosion.  For example, the Corps recently undertook an enormous geo-tube project that was protested by hundreds of local citizens—resulting in 18 arrests.  The $8.4 million federally funded project was authorized after Superstorm Sandy.

In addition to geo-tubes, the Army Corps would also like to add more rocks to the Montauk Lighthouse seawall—yet another project that was proposed in the wake of Superstorm Sandy. For many years, the Eastern Long Island chapter of the Surfrider Foundation has been consistently advocating for less shoreline armoring. In response to the Army Corps recent seawall proposal, the chapter submitted this comment letter.

One of the main reasons Surfrider is opposing the armoring is because there is little empirical evidence that erosion is putting the lighthouse in jeopardy. In fact, a recent NOVA special on PBS quotes the current Lighthouse Manager as saying: “We haven’t lost a wheel barrel of sediment.”

So what is it?  Is the lighthouse in jeopardy, or not?  Surfrider believes that for now it is safe, and additional shoreline armoring would exacerbate erosion.  The above picture clearly shows how the seawall around the lighthouse has eroded the beaches—and down shore from the seawall, there is a wide beach.

It is well established that shoreline armoring causes a net loss of sand to the beach.  While coastal armoring devices are ‘thought’ to halt the impacts of erosion, these structures actually perpetuate erosion—causing the very impact they are supposed to prevent.

In addition to the questionable need for the Corps projects, Surfrider is concerned that funding from the federal government should not be utilized on projects that are not immediately needed. There is another solution to protect the lighthouse from erosion and future sea level rise, and that is simply relocating the structure.  Some argue that it is an impossible task, however there are many lighthouses that have been moved including.  Highland Light, Cape Cod; Nauset Light, Cape Cod; Sankaty Head Lighthouse; Gay Head Lighthouse, Martha's Vineyard; Southeast Light, Block Island; and Hatteras Lighthouse, North Carolina.

Climate change is causing sea levels to rise.  Now is the time to proactively protect structures by pursuing novel approaches and not relying on the outdated measures that require continual coastal armoring.