It's easy to understand the problem with plastic. We can see it littering our parks, waterways, coastlines, and ocean. We can see the harm it does to turtles, birds, and even whales. We can literally hold it in our hands. But did you know it's also contributing to another large and urgent problem that threatens our very survival? Here's one more (BIG) reason to go plastic-free!

As if plastic pollution wasn't bad enough, a recent report by the Center for International Environmental Law found that the lifecycle of plastic is a major source of greenhouse gas emissions and therefore is a serious contributor to climate change. According to the report, in 2019 alone the production and incineration of plastic will equal the emission from 189 coal power plants. What's even worse is that plastic production is on the rise. If the projected rate of increase continues, by 2050 that number will jump to 615 coal power plants and result in 20 percent of global oil consumption. From cradle-to-resin, plastic racks up a hefty carbon footprint. Let's look at the damage it does over three stages - beginning, middle, and end of life. 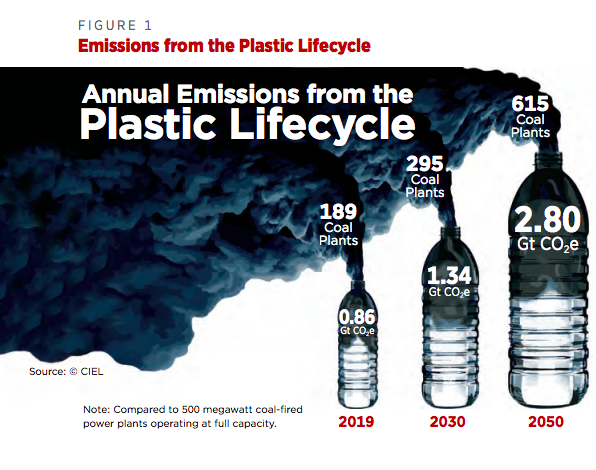 Traditional plastic is formed by fossil fuels like natural gas. As the report points out, the extraction of these fossil fuels can result in direct methane leakage as well as fuel combustion from the drilling equipment and emissions being released from clearing forests or fields for drilling. Trucks are involved throughout this processes carrying water waste to and from the site, emitting more greenhouse gases along the way. Finally, pipelines and compressor stations are constructed to transport the oil and gas to be processed and manufactured into plastic.

As stated in the report, plastic refining is one of the most greenhouse-gas-intensive industries in the manufacturing sector. The chemical refining process from oil and gas to plastic resins releases terrifying amounts of greenhouse gases. In 2015, these emissions equalled the same amount as 45 million passenger vehicles driven for one year. This is a largely unaccounted for cost of plastic production.

Once plastic has entered the consumer market, we may use it for only a few minutes before tossing it in the trash. It can then follow one of two paths. If it makes it into the waste management system it will likely be either landfilled, recycled, or incinerated. Although all three of these options emit their fair share of greenhouse gases, recycling is the most favorable option - once the plastic has already been produced that is - considering it helps limit the need to repeat this process from the beginning. Incineration is, understandably, the worst option for our climate as it contributes to the largest amount of emissions released throughout the entire plastic lifecycle. The other path plastic can take is directly into the environment through littering and the mismanagement of waste. Here, it will slowly degrade over thousands of years, releasing methane and other greenhouse gases as it does. Microplastics in the ocean may actually inhibit the ocean's ability to absorb and sequester carbon dioxide, which is crucial to our survival. 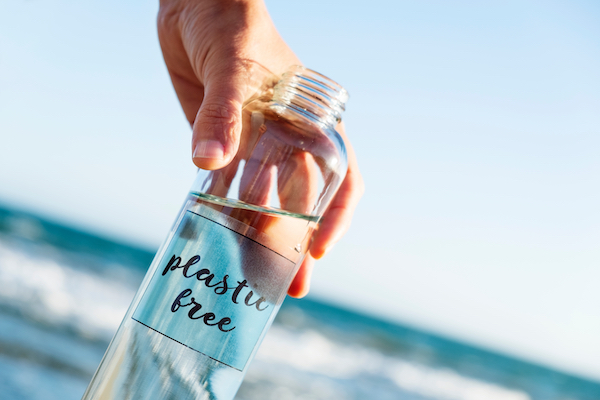 The report outlines four high-priority actions we must take now to prevent this problem from growing any larger:

When it comes to the environment, we must consider how different actions impact each other and start tackling issues from a holistic standpoint. Solutions should focus on maximizing the positive impact. That's why Surfrider supports comprehensive policies that reduce single-use plastic at the source and promotes reusable alternatives that are better for both you and the environment too. Now is the time to transition from throw-away societies to zero-waste communities for the sake of our blue planet.