In response to the approximately 22 billion plastic bottles that Americans throw away each year, Senator Merkley announced that a National Bottle Bill will soon be introduced in Congress. As part of an effort to focus collective action around the crisis, Senator Merkley has also introduced a federal resolution to make July “Plastic Pollution Action Month.” This furthers the momentum of an existing international movement called “Plastic Free July,” which challenges individuals to reduce their plastic use.

“Many of us were taught the three R’s—reduce, reuse, and recycle—and figured that as long as we got our plastic items into those blue bins, we could keep our plastic use in check and protect our planet,” said Senator Merkley, who serves as the Chair of the Environment and Public Works subcommittee overseeing environmental justice and chemical safety, which has jurisdiction over the Break Free from Plastic Pollution Act. “But the reality has become much more like the three B’s—plastic is buried, burned, or borne out to sea. The impacts on Americans’ health, particularly in communities of color and low-income communities, are serious. Plastic pollution is a full-blown environmental and health crisis, and it’s long past time that we do everything we can to get it under control.” 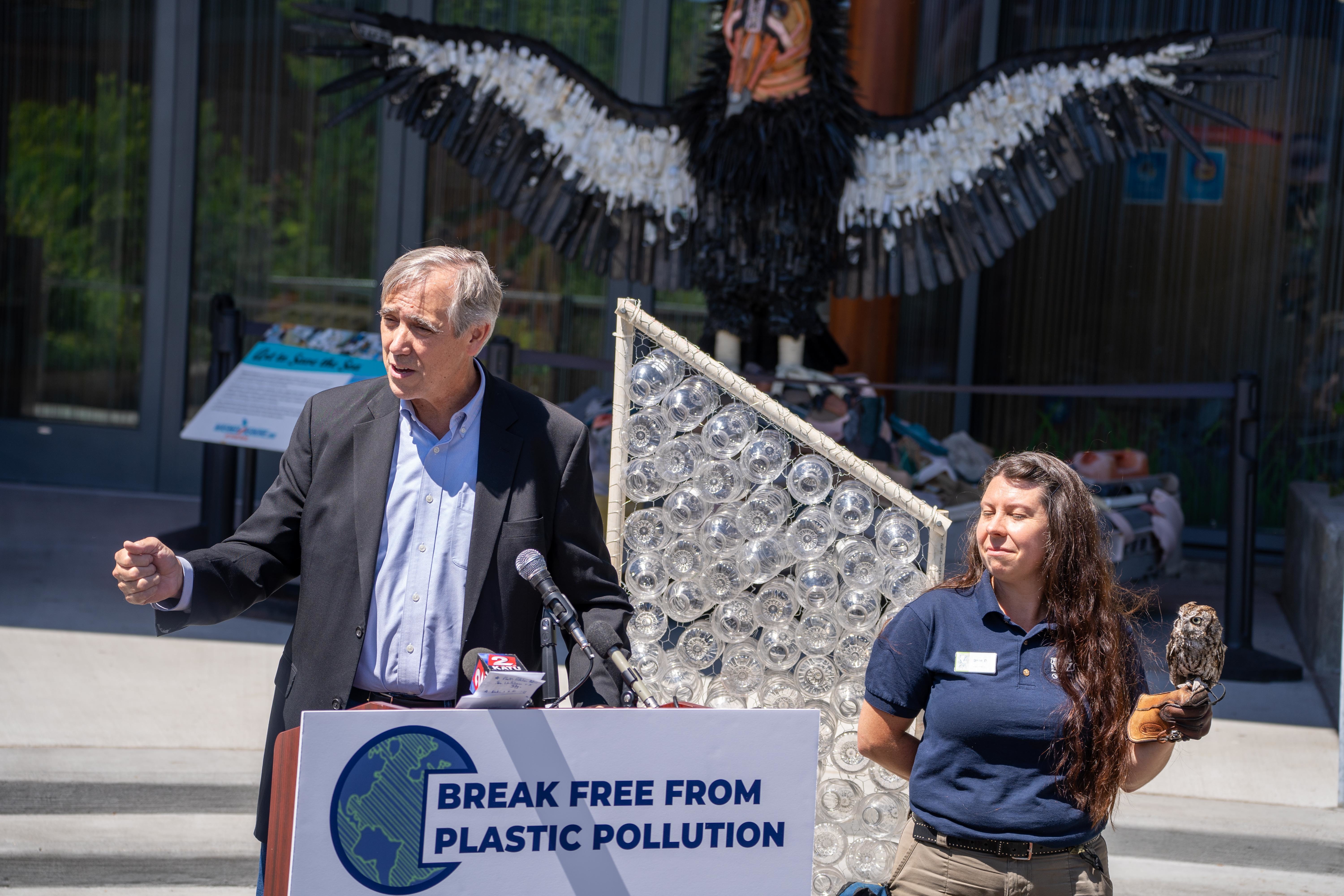 Senator Merkley discussed the Break Free From Plastic Pollution Act (S. 984/H. R.2238), which he led on introducing in the U.S. Senate, with Representative Alan Lowenthal (CA) introducing in the House. The bill is a comprehensive piece of federal legislation that would fundamentally shift the plastic pollution problem by offering source reduction measures and extended producer responsibility, addressing chemical recycling, and calling for reusable and compostable alternatives.

The press conference featured a bottle installation by Re:Solve NW and a California Condor made out of plastic marine debris by Washed Ashore, beautifully illustrating the need for solutions to the plastic crisis.

While many of the plastic pollution bills failed in Oregon’s 2021 Legislative Session, state leaders are still committed to taking action.

“Public beaches and returnable bottles are a critical part of Oregon’s remarkable legacy,” said Representative Gomberg. As a coastal legislator, I know we still have a long way to go to address the scourge of plastic and foam debris. But sadly, too many other parts of the country are further behind. Americans throw away over 20 billion plastic bottles a year. An estimated 33 billion pounds of plastic enter the marine environment each year, devastating the world’s oceans. Much of this plastic waste comes from single-use plastics—packaging, food containers, or disposable foodware and other items that are typically used and thrown away, putting an immense burden on local governments to handle the waste. We can do better! I’m proud to stand here today with Senator Merkley and to support his efforts to promote responsible recycling.” 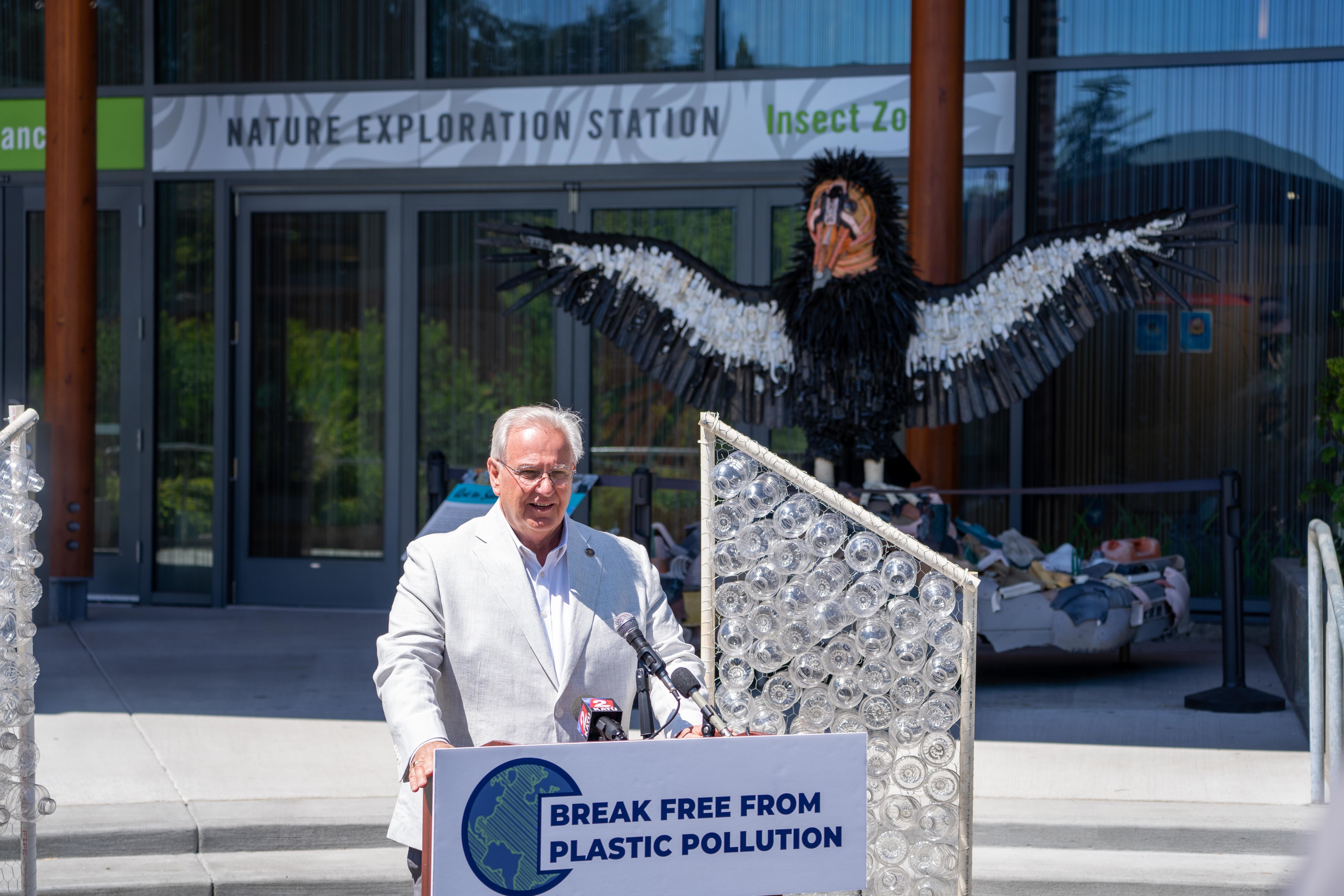 “A big reason why plastic pollution is on the rise is because producers are absolved of all responsibility for where their products end up, leaving you and me with limited choices when buying consumer goods and then footing the bill for managing the waste. That fundamentally has to change,” said Oregon State Representative Janeen Sollman (HD 30). “Producer responsibility programs work because they change the incentives that make wastefulness so cheap.” 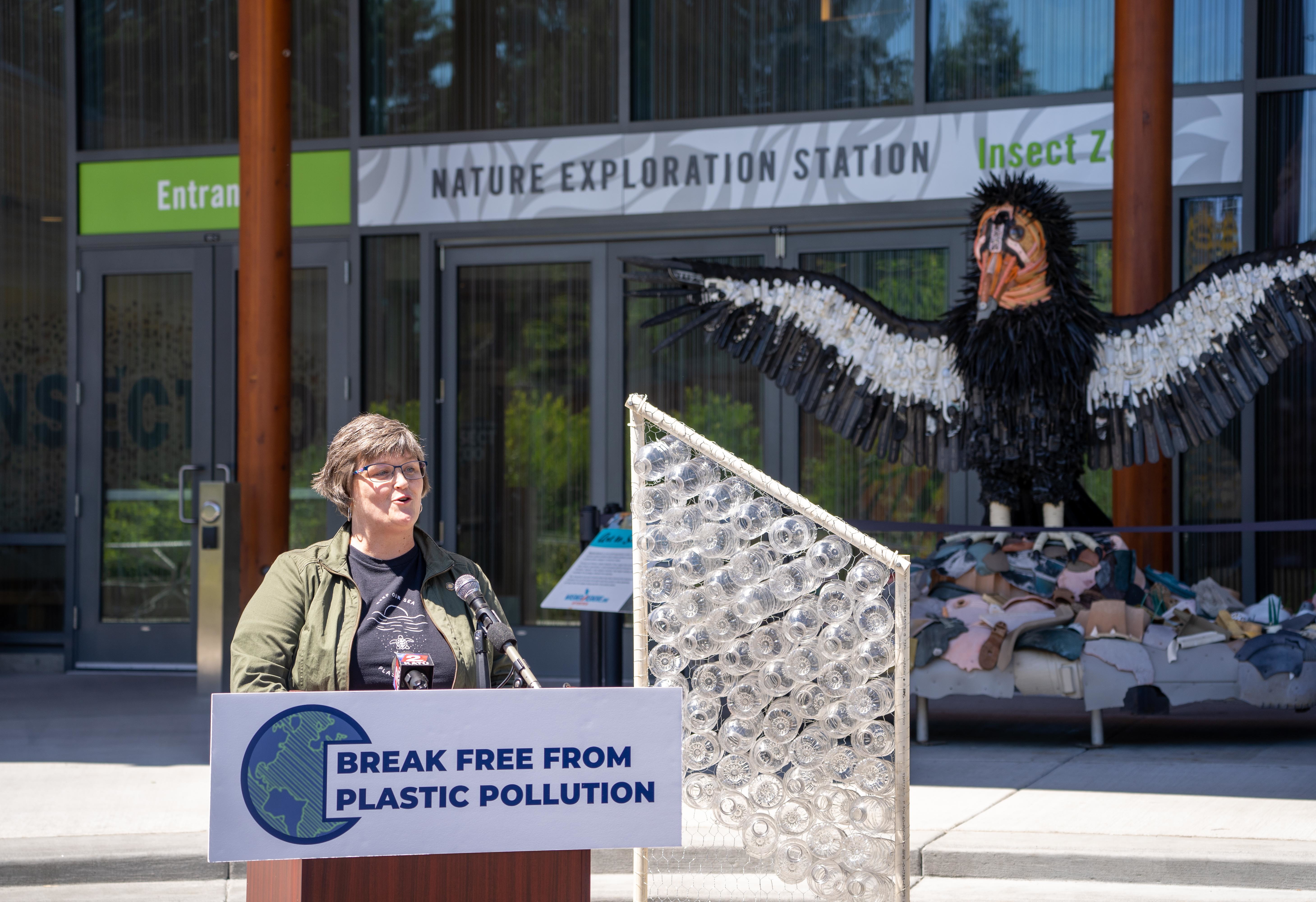 “In 2020, 88% of the items removed during Surfrider beach cleanups were made of plastic,” said Bri Goodwin, Oregon Field Manager with Surfrider Foundation. “Surfrider volunteers dream about the day they no longer need to host beach cleanups to protect the environment. Stopping plastic pollution at its source is the only way this dream will ever become reality. We commend Senator Merkley for leading the way at the federal level to end the plastic pollution crisis.”

“Plastic pollution has created a global health crisis for wildlife, ecosystems and humans,” said Amy Cutting, Oregon Zoo interim director of animal care and conservation. “Plastic entanglement and ingestion pose a grave threat to many species, including the critically endangered California condor. Reducing the sources of plastic pollution will help protect all life and the ecosystems we depend on, and we applaud Senator Merkley’s leadership in this effort.”​​

“Mitigating plastic pollution at its source is vital for the protection of our marine ecosystems,” said Grace Doleshel, Youth Programs Coordinator for the Oregon Coast Aquarium. “Together, we can facilitate change and foster environmental stewardship. Together, we can assure that Oregon’s beauty and wildlife are here to cherish for generations to come.”

“Nothing we use for a few minutes should be allowed to pollute our oceans and rivers and threaten wildlife for centuries,” said Celeste Meiffren-Swango, State Director with Environment Oregon. “Momentum is growing across the country to reduce plastic pollution and it's heartening to see Oregon's own Senator Merkley leading the effort in Congress.”

“Single-use plastics are harming sea turtles, whales, dolphins, and other marine animals at an alarming rate,” said Sara Holzknecht, Field Representative at Oceana. “With the Break Free From Plastic Pollution Act, Senator Merkley is leading the national charge to protect our oceans and communities from the growing plastic pollution crisis.”

The recording of the event can be found here.