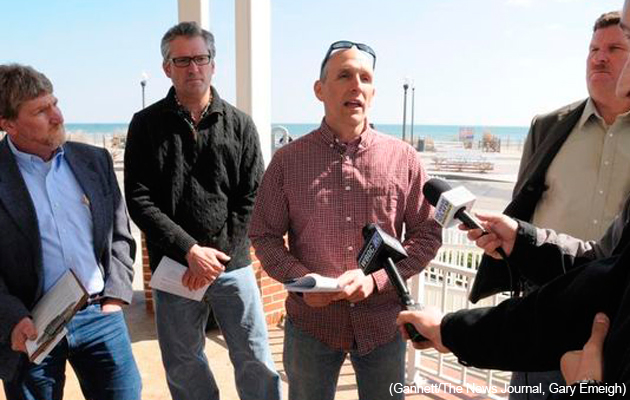 The Delaware Chapter of the Surfrider Foundation held a press conference on the Rehoboth Beach boardwalk on March 20th, to protest a new ocean outfall pipe that the City is proposing to build.  The Chapter and other like-minded civic and environmental groups are concerned that the building of the pipe and the consequent sewage discharge will impact water quality at Delaware beaches, tourism, and habitat for the endangered species Atlantic Sturgeon.  Instead of building a new pipe, and just relocating the problem, Surfrider is advocating for more advanced treatment of the wastewater, so that it can be recycled and used for Land-Based Applications such as irrigation or to replace much needed wetland areas.

"Millions of gallons of water go out into the ocean every single day," attested John Weber, Surfrider’s Mid-Atlantic Regional Manager. "Using it once and then throwing it away in the ocean? We could do a lot better with our water resources."

Advocates chose to hold this press event in response to the Governor’s announcement at the beginning of the year of his new Clean Water for Delaware’s Future Initiative, which is aimed at cleaning up the State’s freshwater waterbodies and bays.

"Delaware's clean water initiative should provide appropriations for an alternative to a wastewater outfall off Rehoboth Beach," said Gregg Rosner, a member of the Delaware Chapter of the Surfrider Foundation. "That would protect valuable tourism dollars and swimmable oceans for us, and preserve our coastal marine life, with which we share this planet."

The Rehoboth Beach Ocean Outfall proposal is currently under review by the Delaware Department of Natural Resources and Environment (DNREC), and has been for nearly a year now.  There is yet no indication of when and how they will decide.  Read the comments submitted to DNREC by the Delaware Surfrider Chapter here.

Media coverage of the press event held on the Rehoboth Beach Boardwalk here: