For years the beach water quality in South San Diego has been tarnished by cross-border releases of untreated sewage flowing upstream from Tijuana. To better understand the magnitude of sewage pollution, and to protect their local community, Surfrider San Diego partnered with a local high school to start weekly water quality testing at the border.

Visitors and inhabitants of Imperial Beach, a coastal San Diego city that abuts the Mexican border, are all too familiar with suspicious smells, visual sewage plumes, and posted signs of “Warning: Keep Out, Sewage Contaminated Water.”

Imperial Beach, or “IB,” is one of the few quasi-affordable coastal towns left in San Diego County, complete with an impressive surf break and excellent opportunities for coastal wildlife viewing. As such, there seems to be some social inequity at play. With a poverty rate of about 20 percent, it begs the question - would these sewage issues still be ongoing if this was happening in the more affluent cities of Del Mar or La Jolla?

Despite widely broadcasted sewage spills, like in February 2017 when roughly 143 million gallons of raw untreated sewage hit the beaches of IB, minimal effort has been made to solve this problem. Even the reaction of local US authorities has been inadequate to protect public health. For instance, in October 2017, the San Diego Department of Health visited IB in response to multiple complaints about a potential sewage spill, but failed to take water samples or post warning signs. As a result, several beachgoers, including IB’s own mayor who was out surfing that weekend, became ill.

South Bay San Diego communities have had enough, and are taking matters into their own hands. Surfrider San Diego developed the No Border Sewage Campaign, or “NoBS” to take a stand against these ongoing issues, and to demand action. The campaign has grown to incorporate other local community organizations, and is now known as the “South Bay Clean Water-No Border Sewage” initiative. In addition to spreading awareness about the problem of border sewage, the chapter has set up a beach water quality testing lab at a local high school to routinely test the magnitude of fecal indicator bacteria by the border, and plans to expand testing locations throughout San Diego. 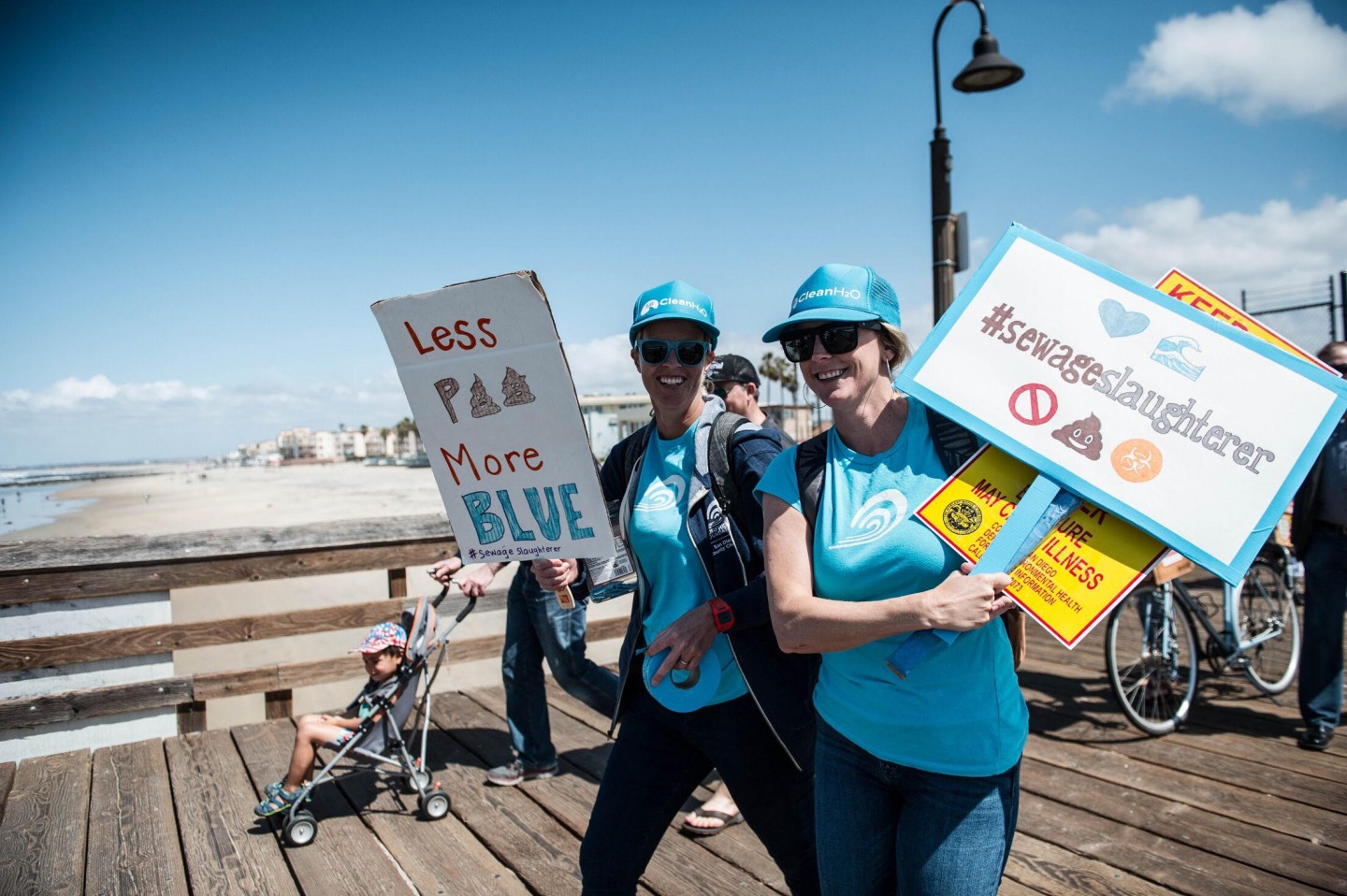 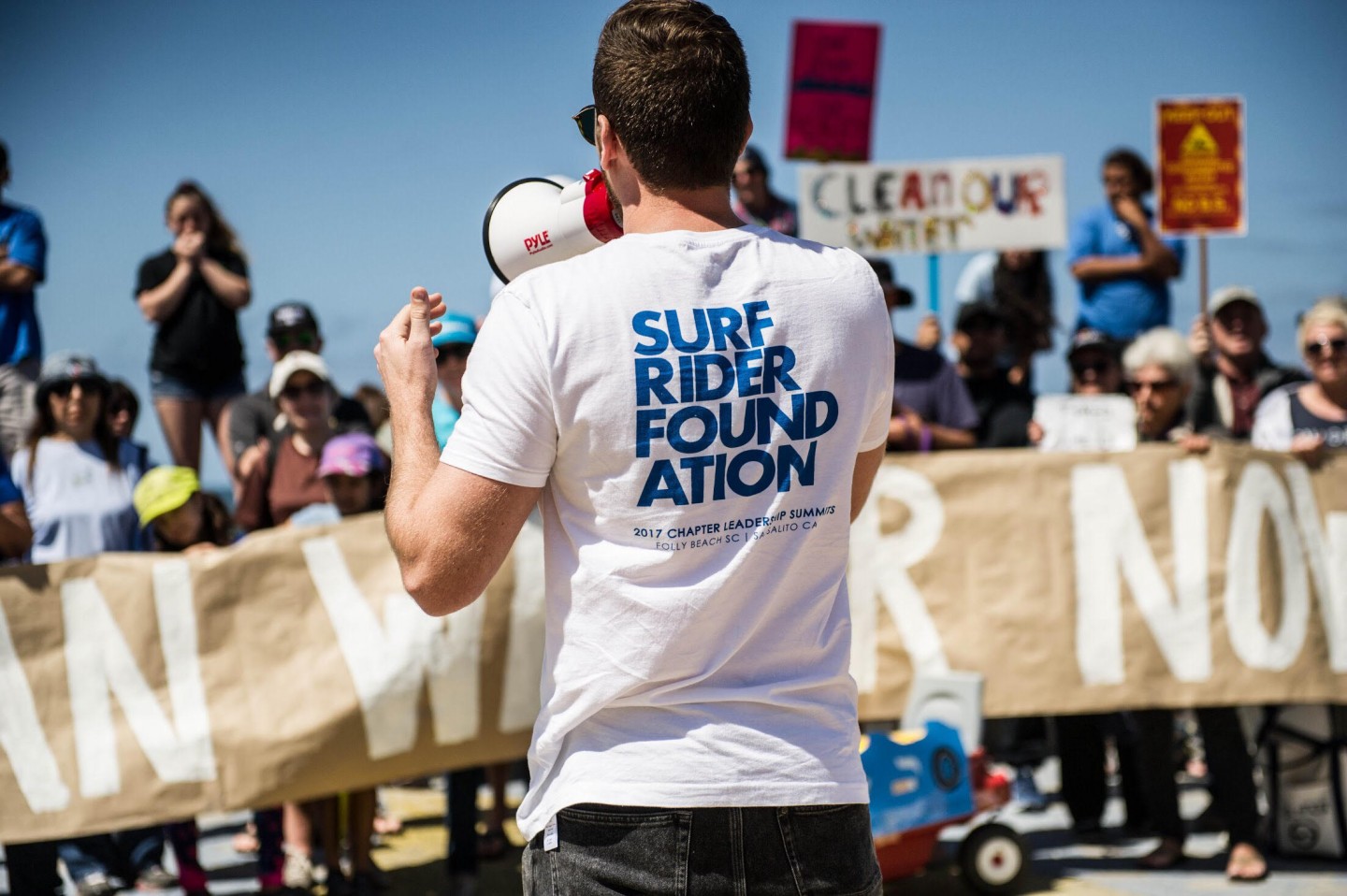 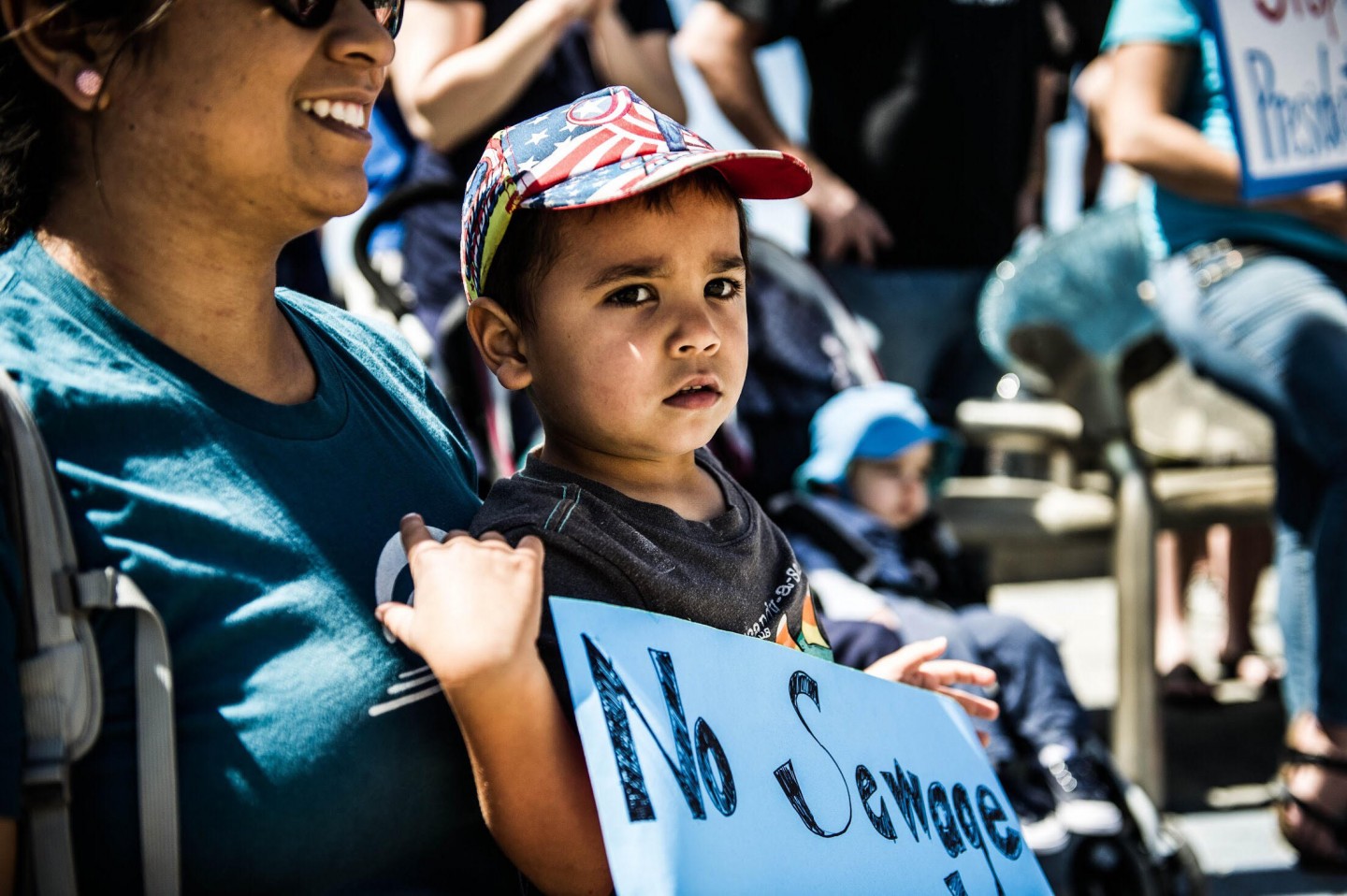 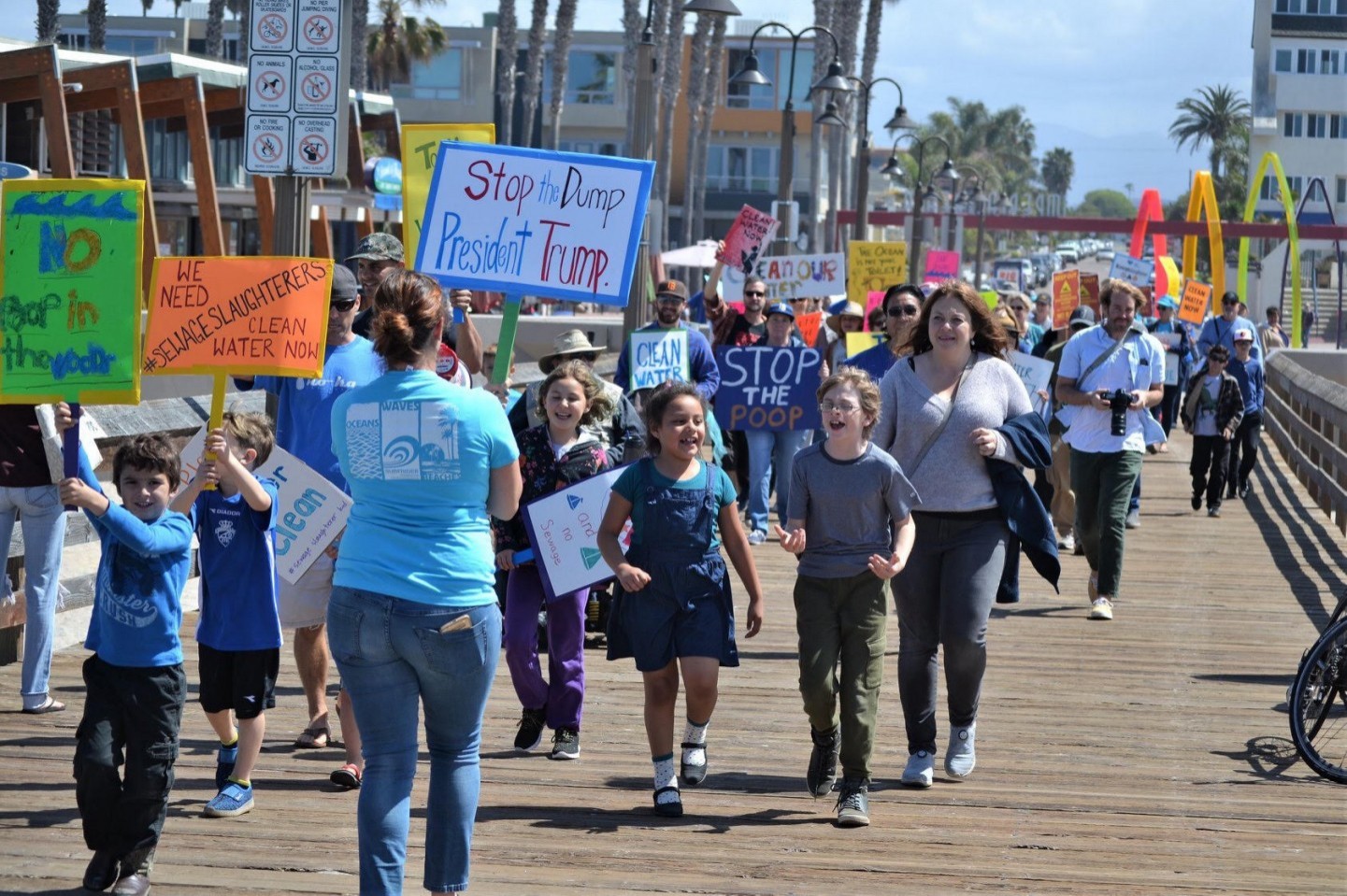 Last week NoBS hosted a march in IB to show that the community is united and adamant about finding a solution. Ongoing cross-border sewage pollution impacts their businesses, their health, the safety of their children, and is simply unacceptable. At the end of the march, attendees gathered to hear speakers including IB Mayor, Serge Dedina, nearby Coronado Mayor, Richard Bailey, a union representative from the Border Patrol Council, Chris Harris, and Surfrider Foundation, San Diego County Chapter Executive Chair, Michael Torti. Officials acknowledge that continued cross-border sewage pollution is not an option, and agreed that something needs to be done. 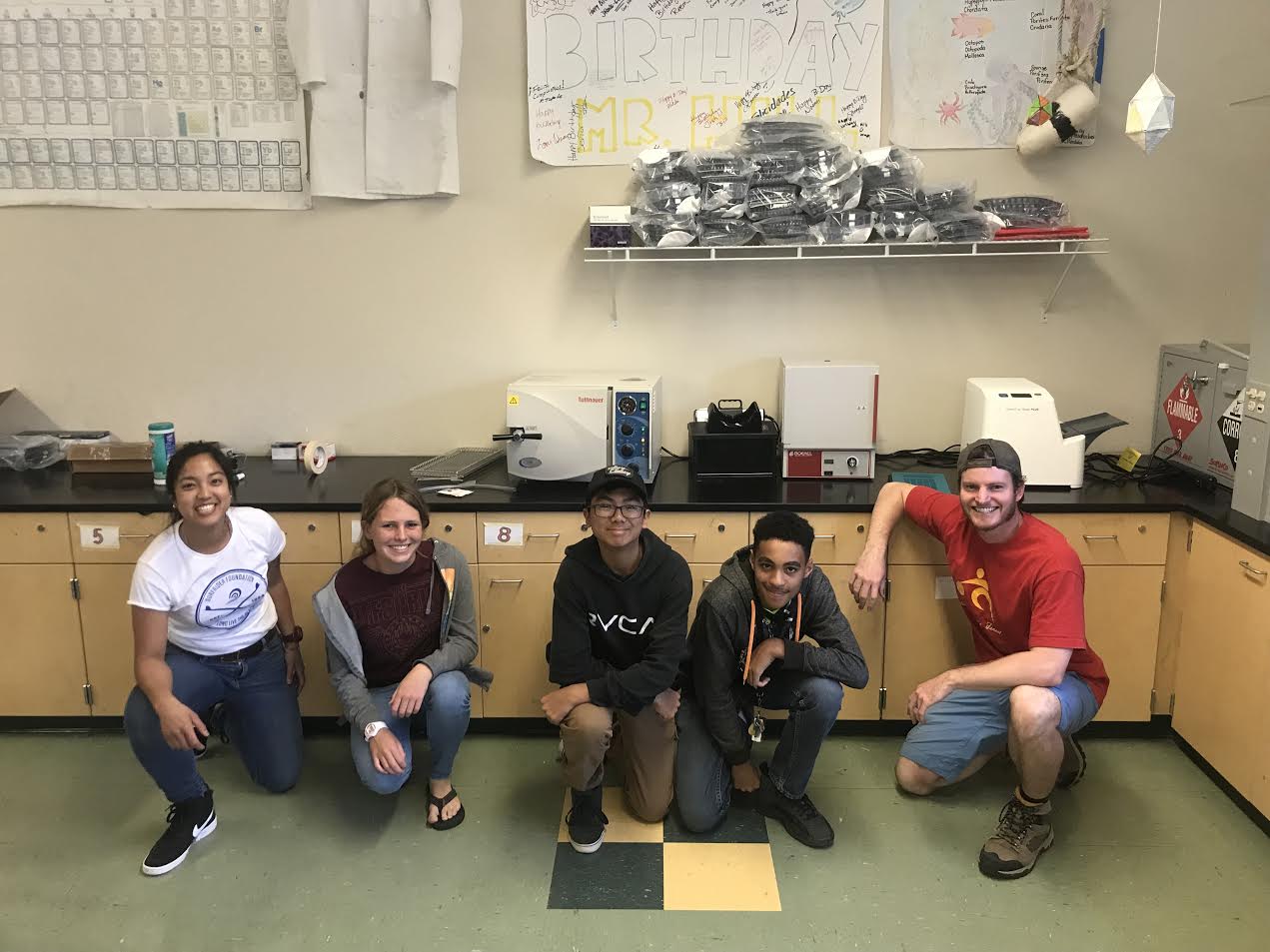 Last month, Surfrider San Diego completed the setup of the first community-run beach water quality testing lab in IB, thanks to a grant provided by the non-profit organization, Las Patronas. With the coordination and participation of Mar Vista High School students, the flagship lab kicked off water sampling in early March. This partnership provides students with hands-on experience in scientific sample collection and processing, a real-time understanding of sewage pollution at their local beach, and the ability to share awareness of this issue by educating the community. Findings will be shared with local jurisdictions and water management agencies to ensure that proper response actions are taken when samples indicate high levels of bacteria.

To date, students are testing two popular locations in IB, the pier and near the estuary at Sea Coast Drive, every Thursday. Results are updated each Friday and can be found on Surfrider’s Blue Water Task Force page. The group plans to expand sampling to include two more locations at Coronado with the help of local volunteers and has secured funding to establish another lab to collect and process samples from across coastal San Diego County. Learn more about the testing protocol, locations, and ways to get involved at their monthly program meetings, every third Monday at 7 PM.

How You Can Help