Surfrider Stands Up for Clean Water at the U.S. Supreme Court

The fate of Maui’s coastal waters and that of the nation’s premier water quality protection law, the Clean Water Act, is headed for the U.S. Supreme Court on November 6th. The Surfrider Foundation’s Maui Chapter has been fighting to protect clean water and to stop Maui County’s Lahaina Wastewater Reclamation Facility from discharging millions of gallons of treated sewage into groundwater each day. The contaminated groundwater flows to the Pacific Ocean, which compromises water quality, habitat, recreational resources and the ocean we love.

This case has been framed as the “Clean Water Act case of the century.” It could create important precedent that attorneys, environmentalists and regulators will refer to for decades to come. Along with our co-plaintiffs, Hawaii Wildlife Fund, Sierra Club-Maui Group and West Maui Preservation Association, and represented by Earthjustice, the Surfrider Foundation originally filed this suit in 2012 after many years of advocating to the County for water reuse projects instead of wastewater injection, with the “Don’t Inject, Redirect” campaign slogan. When Maui County failed to act, we were forced to take the matter to court to protect the sensitive coral reef and public recreation area at Kahekili Beach.

The courts have agreed with Surfrider and our coalition twice now and have demanded Maui County take responsibility for its water pollution. However, instead of taking action to fix the problem and end the pollution that is impacting residents, visitors and marine life, the County appealed the case to the U.S. Supreme Court, threatening national water quality protections.

“We have been fighting for nine years for the protection of clean water and public health for all people,” said Tim Lara with the Surfrider Foundation Maui Chapter. “This case is about more than defending Maui’s coral reef at Kahekili Beach Park, which has been devastated by the 3-5 million gallons of wastewater dumped into groundwater every day by the County of Maui. This case is also about defending the Clean Water Act and its ability to protect our waterways from pollution, regardless of the route of discharge into protected waterways.”

Maui County argues it does not require Clean Water Act permits for its pollution because it is not discharging “directly” into U.S. waters, but instead through groundwater. However, Surfrider and our coalition argue that the Clean Water Act does not include the word “direct” nor does it require a strictly “direct” injection of wastewater into waters of the U.S. The pollution from the injection wells has been proven to reach nearshore waters, as illustrated from past tracer dye studies funded by the EPA and conducted by the University of Hawaii Manoa. If the Court were to side with Maui County, to read the Clean Water Act so narrowly, it would create a perverse result of allowing a polluter to avoid the Clean Water Act by merely cutting a few feet off of a discharge pipe and creating a gap between “direct” discharge despite the direct effects of the pollution that persist.

At the local level, there is significant discord between the County Council and the Mayor, who has continued to align with polluters across the nation rather than listen to his own constituents, local youth and community interests expressed by the Maui Chapter and our local partners. The local groups have overwhelmingly fought for local solutions and have opposed taking this to the Supreme Court. Learn more about these grassroots efforts here.

At a recent environmental law conference, this case was described as turning into “an episode of Parks and Rec,” referring to the local battle between the Maui County Council and the Mayor regarding settlement. On September 20th, the County Council voted 5-4 to settle the case with Surfrider and other plaintiffs; however, the Mayor did not act to transmit the settlement offer and essentially blocked the will of the people and local legislators to settle. Due to this local turmoil within the County government, it appears the case that can and should be settled locally will go on to be heard at the U.S. Supreme Court.

Thankfully we have very strong arguments and allies. Our reading of the Clean Water Act is consistent with decades of interpretations that protect U.S. waters from harmful pollution. We have shown a direct hydrologic connection between the nearshore waters and in the injection wells with tracer dye studies and geologic surveys document harm to Kahekili Beach reef. Many allies have stepped up to write amicus (or “friend of the court”) briefs, including 37 law professors, Chippewa Indian Band, craft brewers, bipartisan regulators, and more. These parties have acted to ensure that groundwater will not be able to be used as a sewer in the future.

An illustration of the amicus parties is below: 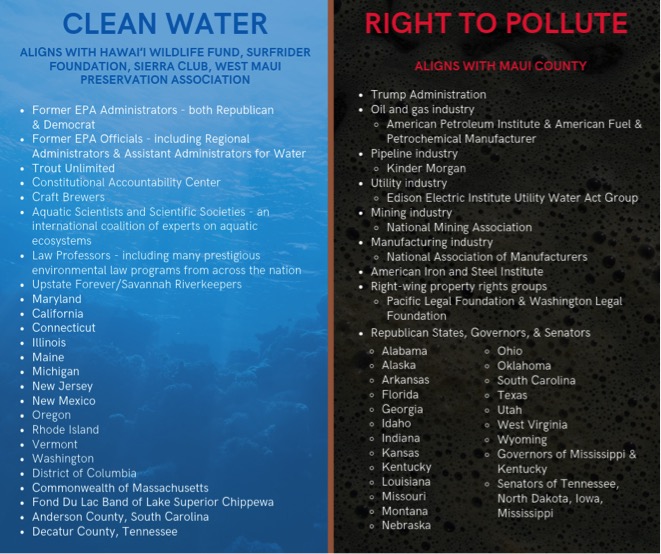 We will have one hour on the morning of November 6th to defend our arguments and the wisdom of the lower court rulings to the nine Supreme Court Justices. We will not have a final decision until spring, and possibly as late as June 2020, because this is a fairly complex issue of environmental law where there may be several concurring and dissenting opinions. To follow the case on the day of the hearing, tune in to Surfrider’s social media channels for real time reporting.