Tsunami Debris – Coming to a beach near you?

This past Sunday marked the one-year anniversary of the tragic earthquake and tsunami that struck Japan with devastating force and sadly took thousands of lives.  As Japan continues to rebuild the most impacted areas, much of the international chatter over the past few months has been about a field of debris marching across the Pacific Ocean, the result from the tsunami surge and retreat.  Surfrider's Beachapedia site has an article that provides a more detailed overview of this issue and also has other great coastal resources. 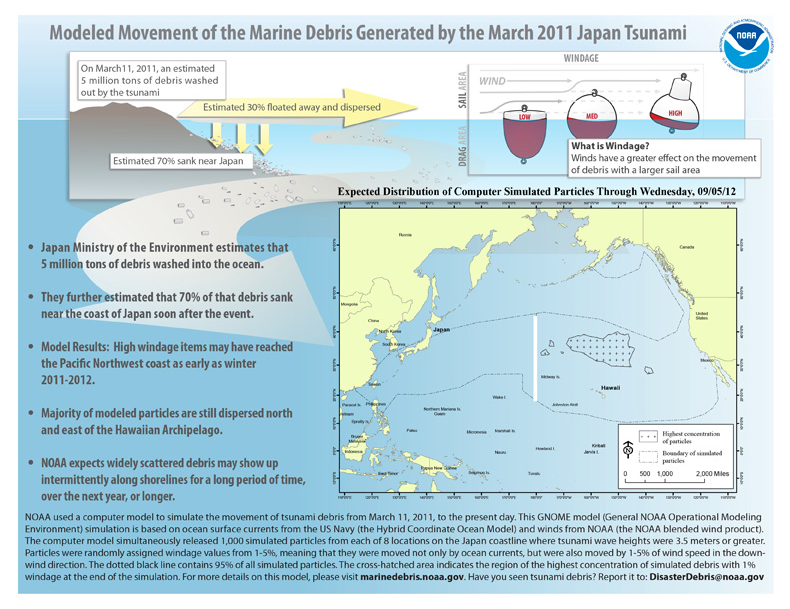 Tsunami debris is a general term that many people are now applying to the specific Japan tsunami debris because it was such a massive event.  Video coverage of the event showing entire fishing villages, towns and farmland being swept into the sea.  Every object imaginable was included from homes to cars in residential to industrial areas.  Most heavy items likely sank within a few miles of the coast while some heavy items floated on top of other debris to be dispersed later.  (NOAA image at right, click for more model information).

There is undoubtedly a large amount of plastic in the tsunami debris and various types of plastics float.  A major concern is that over time this will add to the concentration of plastic in the North Pacific subtropical gyre and wash up on beaches from Hawaii to Alaska and south to California, possibly impacting marine life along the way.  Another concern is that the debris might be radioactive, but that is unlikely.  The tsunami swept the bulk of the debris to sea well before the nuclear reactors failed.   Also, the main reactors that failed were in another area of the country than that most impacted by the tsunami.

NOAA is the official U.S. agency following the issue and has created a web page with their information and faq’s.  Researchers are headed out to survey the debris field this year, tracking it’s progress and seeing if any cleanup efforts at sea are feasible, which is unlikey.

In late 2011 and early 2012 some fishing floats and other items from the Japan tsunami that can ride high in the water possibly started washing ashore in Canada and Pacific Northwest but the bulk of the debris seems to be traveling slower.  NOAA scientists question the claims saying it’s too quick and there’s already other debris coming from Asia or ships on a regular basis.

Acclaimed oceanographer and beachcomeber Curtis. C. Ebbesmeyer, who has been tracking container spills, debris and currents for decades through his Beachcombers Alert! newsletter, believes this is the beginning of increased debris to beaches that are prone to general ocean debris.  Beaches from Northern California to Alaska that already see a fair amount of plastic pollution and other debris wash ashore from the ocean might see more in the next few years - how much is tough to say.  Beaches in Southern California are part of a bight that typically sees a majority of plastic pollution and litter from beachgoers and inland sources, so tsunami debris is less likely to wash ashore there.  Currents and winds are hard to predict precisely over long periods of time so it's tough to totally rule out any area along the West Coast of North America.

Northwestern Hawaiian islands might see a glancing blow of the debris field soon.  Over time plastic debris from the Japan tsunami could also reach some of Hawaii’s southeatern island beaches after a spin in the North Pacific Gyre.  Here’s a time-lapse animation of the possible debris field path and dispersion to give you a better idea:

What is Surfrider Doing on the Issue?

Education:  In addition to our wonderful Beachapedia article on tsunami debris, Surfrider is partnering with Algalita and 5 Gyres to support their upcoming educational journey to explore marine debris.  They also offer a Ship to Shore program specifically geared at educating in the classroom.  Surfrider is also working through our local Chapters to educate the community.

Outreach: Many Surfrider Foundation Chapters in effected areas have held or will be holding educational workshops on the topic of tsunami debris to educate the local community.  Surfrider's Oregon Chapters will be holding a series of twelve workshops with NOAA and other partners up and down the coast in April 2012. Olympic Peninsula Chapter in Washington hosted a meeting with a prominent oceanographer (where it was revealed that a float from Japan had reached our shores).  Our Kaua'i Chapter also hosted a tsunami debris conference in February 2012. Surfrider is working with the Pacific Coast Collaborative, West Coast Governors Alliance and NOAA on beach clean up protocol and reporting.  Finally, we help keep our supporters informed on current tsunami debris news through our Twitter Accounts @Surfrider and @Envirosurf, as well as our SOUP enewsletter.

Legislation: We are working to track legislation and legislative amendments in the U.S. Congress that would help address surveillance and clean up of the debris, as well as raise awareness about the general issue of trash in our oceans.  Legislation currently in play includes the Marine Debris Reauthorization Amendments in the House and the Trash Free Seas Act in the Senate.

What Can You Do to Help?

1) We are already sending massive amounts of debris to the ocean on a regular basis so sustainable actions everyday can help reduce plastic pollution: refusing single-use plastics, reducing your plastic footprint, remembering your reusables, and recycling the rest.  Sign the Rise Above Plastics Pledge and also support plastic pollution source reductions such as plastic bag bans.

2) Research the Japan tsunami debris field with our friends at 5 Gyres and Algalita.  The first leg starts on May 1st and they are raffling off one of the spots!

3) Help with a Surfrider Foundation beach cleanup.  Most Surfrider Chapters host at least one cleanup a month, click here to find the website for your local chapter.

4) If you come across potential tsunami debris on sea or land, NOAA has tips for reporting it.

5) Follow the issue here on the Coastal Blog or on Surfrider’s Take Action Page for updates on possible federal legislation.

Random tidbits from various media sources:  “Some experts, however, are more concerned about the debris we may never see but that might still pose a threat to human health.”

“Japanese officials estimated last year that the tsunami washed away 20 million to 25 million tons of stuff, from cars to bottle caps to photo albums, into the ocean. Most of it sank just off the Japanese coast, leaving 1 million to 2 million tons to float across the sea.” 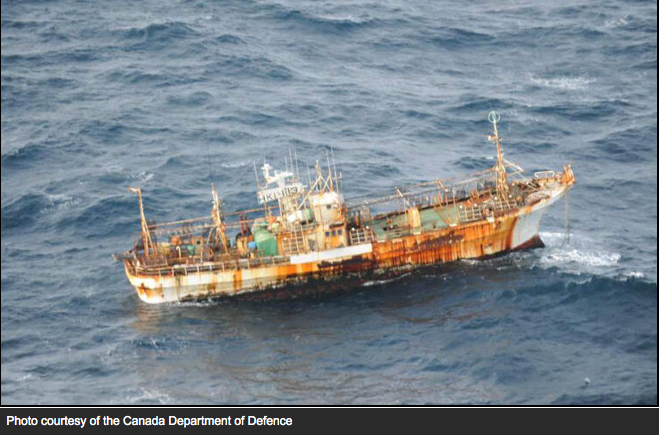 MARCH 26 UPDATE:  Late last week reports came in from Canada about a ghost ship a few hundred miles off the coast.  This has stirred up the debris discussion again and has brought some people to call for swifter action.  “The abandoned squid boat was found earlier this week by an aircraft on a routine surveillance patrol for the Fisheries and Defence departments.  “We don’t know the name of the boat but we used its registration number to trace it back to [Japan],” said Jeff Olsson, marine controller at the Joint Rescue Co-ordination Centre in Victoria.”  U.S. Senator Maria Cantwell from Washington contacted Japanese officials to confirm it was from the tsunami then called on swifter action to prevent any threat to jobs that depend on healthy oceans: “This discovery is further proof that the U.S. government needs a comprehensive plan for coordination and response to the tsunami debris,” Cantwell said in a news release. “Coastal residents need to know who is in charge of debris response – and we need clearer answers now.”  It's unclear if any fuels or fluids might be on board that might leak or cause problems.  It's likely to take weeks before it would make landfall and there's early indication that someone needs to intercept the ship and tow it to safety, but who?