Offshore wind development in the U.S. continues to move forward on a large scale. The Surfrider Foundation is monitoring these proposed developments and has been involved with state and federal government approval processes, including the main approval process headed by the Bureau of Ocean Energy Management (BOEM). In some parts of the country, projects could be operating by 2023, while in others, that date could be closer to 2030 or later. Please read on to find out what is happening in your region.

Commercial scale offshore wind projects, if built, will significantly help transition the US away from dirty, carbon polluting fossil fuel energy sources. Like all development these projects will have some harmful impacts, and undoubtedly, will change our coasts and oceans. Science proves however that we must act now to best mitigate the massive impacts from climate change which are negatively impacting our ocean and coasts. For this reason, the Surfrider Foundation has taken a cautious, measured approach to offshore wind projects, supporting them only when we have enough information, and if they meet a high bar for environmental and recreational protection.

In March of 2021, the Biden Administration announced an increased focus on offshore wind projects, including a goal of developing 30GW in the US by 2030 (1GW is enough power for about 500,000 homes). The Administration will add specific funding for federal agencies to complete the backlog of offshore wind permitting that built up during the previous administration, as well as provide new funding sources for commercial research and development. Funding for research is particularly important to help advance technology that can mitigate harmful impacts resulting from construction and operation of wind turbines.

The area offshore from Maine to Virginia holds 16 commercial leases, and is the area where US wind projects are closest to operation. The Vineyard Wind project, offshore of MA and RI, could be the first large-scale commercial wind project constructed in US waters, following in the footsteps of success from the small-scale 5-turbine project off Block Island, RI.

Like the West Coast and Hawaii, the waters offshore of Maine, New Hampshire and northern Massachusetts are too deep for fixed turbines, so floating technology would be required. Currently there are not any Call Areas, which is the first step towards leasing of wind projects. However, the Gulf of Maine Intergovernmental Renewable Energy Task Force is working to analyze the potential for floating wind in the region. Additionally, the University of Maine, in cooperation with the State government, is operating the Deepwater Offshore Wind Test Site in federal waters off the coast of Maine to test floating wind technologies.

These projects are in the various stages of permitting, with Vineyard Wind and South Fork Wind nearing construction, most likely beginning in 2022. In late summer 2021, BOEM was sued by a coalition of commercial fishing groups, challenging BOEM’s approval of the Vineyard Wind project. It is unclear if these lawsuits will slow or stop this project, and how the legal challenges might impact other projects in line for approval from BOEM.

The South Fork and Sunrise Wind projects mentioned above are planning to land their power cords in New York. Another project, Empire Wind, is closer to New York City and is planning to land their power cords in NYC and Long Beach. BOEM is moving to grant additional leases offshore of New York and New Jersey. Public engagement opportunities during the Environmental Impact Statement phase of permitting should start in 2022 for both Empire and Sunrise Wind projects.

Besides the new leases proposed by BOEM offshore of New York and New Jersey, the State already has two large leases in the southern part of the state, Ocean Wind and Atlantic Shores. Both of these projects will enter into the Environmental Impact Statement phase of permitting in 2022, where the public will have the opportunity to comment at public hearings.

There are three leases near the border between Maryland and Delaware, but they are in a bit of limbo as Maryland is currently planning to award additional power purchasing agreements, a major financial step for any wind project. The owners of the lease for the Skipjack Wind project are attempting to expand that project, and other companies are looking to move forward in this region. This situation puts Delaware and Maryland a few years behind the states to their north in the permitting process.

Dominion power company, working with the State of Virginia, constructed two turbines offshore in 2020, as a test for a much larger project they hope to have operational by 2026. The Coastal Virginia Offshore Wind Commercial project would be large, up to 3000MW, and located further offshore than most projects on the East Coast, at 27 miles. CVOW-C will enter into the Environmental Impact Statement phase of permitting in 2022, where the public will have the opportunity to comment at public hearings.

Hawaii is in the first phase of the BOEM process, where the agency identifies geographically specific areas in the ocean known as Call Areas, and inquires if any wind companies are interested in developing those areas. Call Areas were identified in 2016 offshore of Hawaii, but the next steps in BOEM’s process, creating Wind Energy Areas (WEAs) within those Call Areas, and leasing sections of WEAs to wind companies, has not yet occurred. Like the West Coast, the waters off Hawaii are too deep for fixed wind turbines, so floating turbine technology would need to be used.

Deep waters offshore of the US West Coast necessitate the use of floating wind technology. Although commercial scale floating wind turbines have been deployed successfully, the technology is still in the testing phase and has more unknowns than fixed wind turbines. For this reason and others, the West Coast is not as far along in the development process as the East Coast.

BOEM has not yet identified Call Areas in Washington. Principle Power, a private wind development company, has put forth plans to construct projects in both Washington and Oregon, but those proposed projects have not moved forward. Another project, Grays Harbor Wind, could be proposed soon.

BOEM has not yet identified Call Areas in Oregon, but the State is working with BOEM and the Oregon Intergovernmental Renewable Energy Task Force to collect and analyze ocean data to move towards that step. The state passed legislation in 2021 directing planning of 3 GW by 2030 and establishing a state policy position for research and development. (Oregon is also moving forward with the testing of offshore renewable wave energy in a project called PacWave). Surfrider hosted an informational webinar on offshore wind for Oregon in 2020.

BOEM has identified two Call Areas and one Wind Energy Area (WEA) in California, working with the California Intergovernmental Renewable Energy Task Force. The two Call Areas are called Morro Bay and Diablo Canyon in Central California, while Northern California has the Humboldt WEA. BOEM is preparing an Environmental Assessment for the Humboldt WEA, which could lead to lease sales there. BOEM issued a call for public comment and wind industry interest for the Morro Bay Call Area.

The Gulf of Mexico is dominated by the offshore oil and gas industry, and does not have as strong a wind resource as the West and East coasts. For those reasons, the offshore wind industry has not prioritized the Gulf. However, the Biden Administration has instructed the Department of the Interior to study the potential of offshore wind project development in the Gulf.

The Great Lakes do not fall under the authority of BOEM, but rather State governments. Various states have proposed projects in the lakes, including the Icebreaker Wind Project in Lake Erie, but none have moved forward with development. Less space, and increased interactions with birds and bats compared to ocean waters, are challenges for Great Lakes projects.

From North Carolina south, there is only one lease, the Kitty Hawk/Avangrid Project near the NC/VA border, which is moving into the final BOEM permitting process which includes National Environmental Policy Act review. North Carolina has two WEAs, and one of them, Wilmington East (which is located near the SC border), is moving towards the leasing stage of development. In 2015, BOEM identified four Call Areas in South Carolina, but those areas have not moved forward. Despite some activity a decade ago, neither Georgia or Florida are moving forward with offshore wind development at this time.

In a strange twist, a 2020 Trump Administration memoranda which bans oil and gas leasing in federal waters offshore of NC, SC, GA and FL also applies to offshore wind project leasing. This ban begins July 1, 2022 and lasts for 10 years. It will not affect the Kitty Hawk project but will block any future wind leasing until 2033. 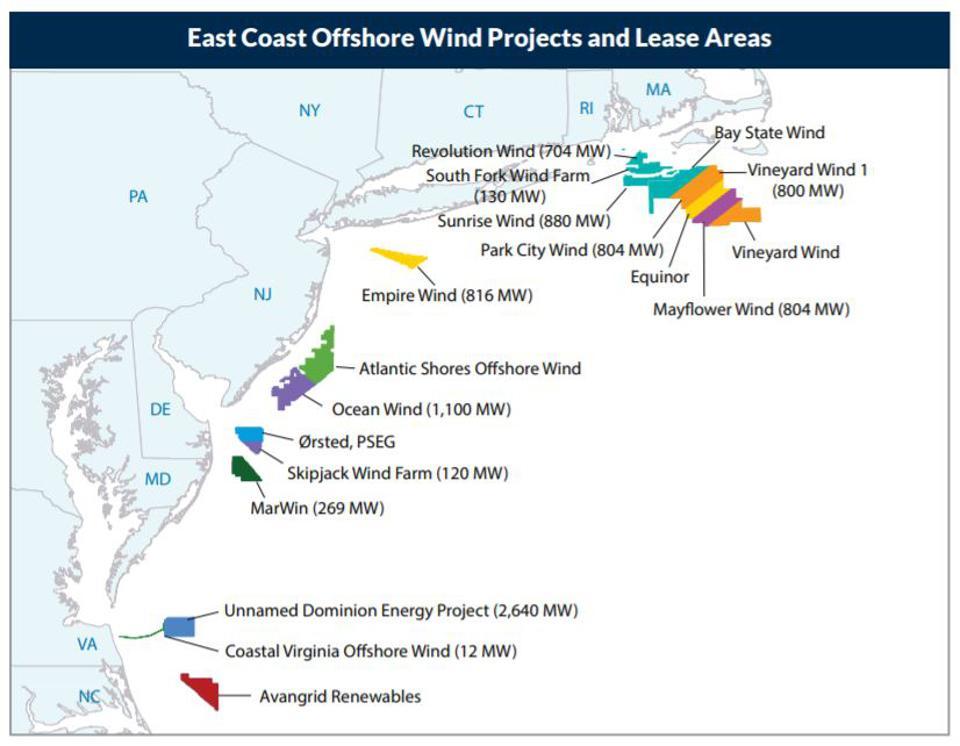