The Surfrider Foundation is proud to announce the recipients of its 2015 Youth Club Awards. These Clubs are recognized for their outstanding leadership, performance, dedication and support in fulfilling the Surfrider Foundation’s mission to protect our world’s ocean, waves and beaches. Through their voluntary and sustainable actions, they have spending countless hours to address issues facing their communities, while having a positive impact and increasing awareness of the Surfrider Foundation. We thank each of the Club participants for their passion and dedication to our coasts.

This club developed on campus a Solo Cup Campaign. College kids are big users of these red cups. So many of these cups can be found after each weekend just thrown away in dumpsters. The Club found out about Terracycle's programs and reached out to the fraternities on campus to get these cups from them in order to send into Terracycle so they can be melted down and upcycled instead of ending up in a land fill. In one weekend alone the club collected and sent 2,000+ cups, thus prevented 2,000+ from ending up in a landfill. In addition to keeping plastic out of our landfills and oceans Terracycle gives back 1 cent per cup to Surfrider Foundation for every cup  sent in. It is a win-win for everyone!

The Club performed a large scale clean up effort at Mānoa Stream, O'ahu. The effort colleected 3,000 pounds of debris with around 120 volunteers.

This Club has year after year excelled at club rush events and membership drives. Even though membership is not a requirement for clubs,, this year they collected 20 memberships to help sustain their club.

This club performed the most beach clean ups and tabling events throughout the school year totaling over 300 hours.

This club was very passionate about how they could participate and contribute to the Cape Fear Chapter's Stop the Drill Campaign. Their project began by traveling to other local schools in an attempt to further establish clubs throughout the county. They worked to continue to spread awareness about offshore drilling and seismic testing through presentations to science classes and other media, such as yard signs, to ensure participation at the upcoming town meetings. Though some schools had some difficulty with their own club establishment process, the student support and engagement grew exponentially.  They have reached 4 high schools and 2 middle schools with at least 250 students who are passionate about environmental problems.

In addition the School Without Walls Club in Washington, DC was also able to contribute by talking to congressional members about the campaign. 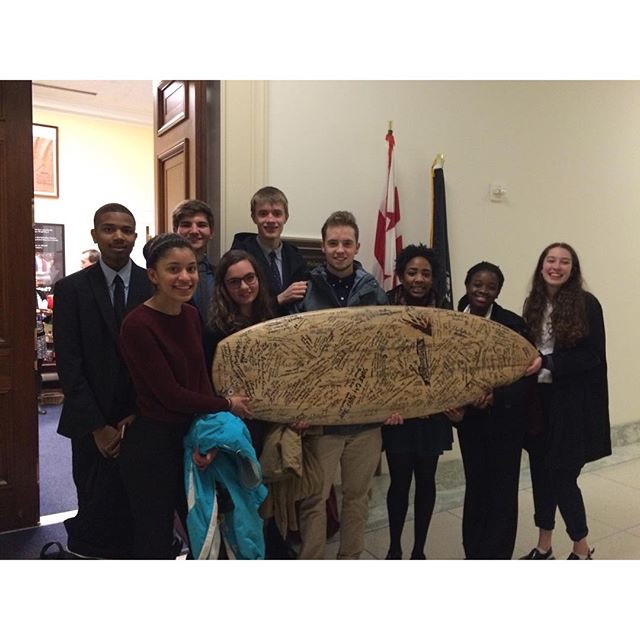 All 50 of Surfrider Foundation's youth clubs peformed amazing and thoughtful environmental projects and we look forward to seeing their future endeavors.