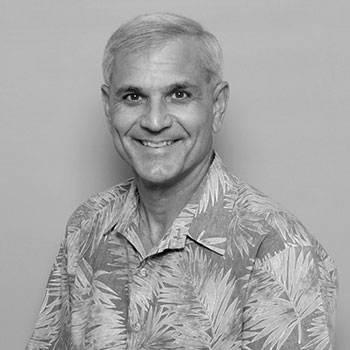 Ed is a lifelong surfer and all around waterman. He grew up surfing and diving the east coast of Florida. After a 28 year career in the Army he retired in Hawaii where he is out on the water almost every day. He and his wife also own the charter sailboat company Aloha Sailing Key West in Key West, Florida.

Ed graduated from Stetson University in Deland, FL, with a B.S. in Biology and later earned a M.S. in Environmental Engineering Sciences from the University of Florida, majoring in wetlands ecology and hazardous waste management. He was a career Army officer, retiring as a colonel after 28 years of service. His military career included over a decade of command assignments in the U.S. Army Corps of Engineers (USACE), including the Pacific Ocean Division, supervising four districts in Alaska, Hawaii, and Asia; Savannah District and Walla Walla (WA) District of USACE; and engineer company commander in a special operations unit.

Ed served as an environmental staff officer in the Portland District. His education as an environmental biologist prepared him well in managing numerous environmental programs in USACE; he was Commander, North District, Gulf Region Division, Iraq, during Operation Iraqi Freedom; his last assignment was as deputy commander of the USACE Transatlantic Division in Kabul, coordinating over $12B in construction in support of coalition and Afghan forces; and in 2005 he served as the military advisor and chief of staff to the NATO Senior Civilian Representative for Afghanistan in Kabul, the former foreign minister of Turkey, Minister Hikmet Çetin.

Ed received numerous military decorations and awards over his career, including several Legions of Merit and Bronze Stars, the Master Parachutist Badge, Pathfinder Badge, and Ranger Tab. Ed is an avid surfer, snowboarder and sailor and frequently volunteers at beach cleanups and other activities. He and his wife actively support the Surfrider Foundation, The Nature Conservancy, and the Eddie Aikau Foundation. He is married to his high school sweetheart and his wife is an Army career counselor. Their children have chosen military careers; their son is an Infantry major and their daughter is a Medical Service Corps captain.