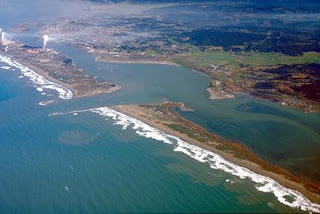 Pacific Gas and Electric Company (PG&E;) announced it will be suspending permitting efforts on the Humboldt WaveConnect Project. The decision was made after several major challenges made the project unviable at its proposed configuration and location. In 2007, PG&E; began examining the feasibility of using the power of ocean waves to create clean, renewable electricity to meet the state’s goals for energy. The Humboldt site was selected for a pilot project that would allow for the testing of several types of hydrokinetic technologies. Over time, however, significant permitting challenges emerged and costs of the project were higher than projected.

Members of the Humboldt Chapter of Surfrider Foundation participated extensively in the stakeholder working group process to identify and minimize potential impacts to existing uses and the natural environment. The Chapter had supported the draft license application submitted by PG&E; to the Federal Energy & Regulatory Commission (FERC).