No Straws for Portland, Maine

After a local student successfully petitioned the Portland City Council to mitigate plastic straw use in city-owned buildings using our help to advance a program targeting Portland bars and restaurants, the Chapter took it to the next level with interest from the Council to pass a citywide ordinance banning plastic straws, stirrers and splash sticks.

In late 2018, our Northeast Regional Manager and chapter secretary attended a public meeting hosted by the Portland City Council's Transportation and Sustainability Committee to speak to policy mechanisms for mitigating plastic straw use. They provided a packet of information detailing policies around the US and made a recommendation of a ban on plastic straws.

The matter was expected to resume deliberation in June of 2019, but did not get picked back up again until the June 19, 2019 meeting of the Committee. The proposed ordinance was strong, seeking to ban single-use plastic straws and institute an ask-first policy for straws composed of natural fibers (bamboo, hay, cardboard, etc). The ordinance also initially sought to prohibit the use of straws in city beaches and parks - a great idea that was later deemed to be too difficult to enforce. However, city officials indicated that they may try to place signs about not using straws at the City's parks and beaches to encourage voluntary compliance and increase the effectiveness of the ban.

Our Northeast Regional Manager presented testimony at the 6/19/19 hearing, and answered questions from the council members regarding why compostable straws are not a good ask-first option, and why a ban is so critical (versus a non-binding approach).

The first reading of the straw, stirrer and splash stick ban was on October 7, 2019, and the 2nd reading and vote was on October 21, 2019. Six Chapter volunteers attended with three speaking. Our Regional Manager also gave testimony to speak against an amendment proposed by Councilor Cook, which while well intentioned to make better accommodations for persons identifying as living with disability, would have rendered the ordinance an ask-first policy instead of a ban, which would not be nearly as effective at curbing pollution. 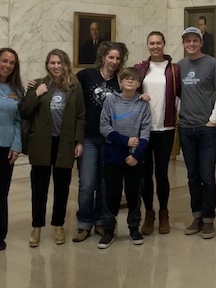 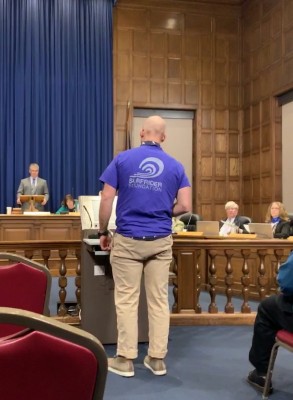 Council debate ensued on the issue of accommodation for people requiring straws to drink hot or cold liquids, and a compromise was struck that maintained the ban while removing the need in the initial ordinance for people requiring a straw to need to self-identify. The compromise amended section five of the exceptions part of the ordinance to clarify that anyone requiring a plastic straw could ask for one, and that a straw would then be provided with no additional questions asked. The following language was also added to the preamble to help qualify the nature of the exception and the intents of the council: The City Council recognizes the need to ensure that plastic beverage straws remain available to those who require them for consumption of hot and cold liquids and seeks to protect the privacy and dignity of those requesting a plastic beverage straw.

The council carried the amended ordinance unanimously to passage, banning all types of single-use plastic straws, stirrers and splash sticks!

Straws are one small piece of the larger plastic pollution crisis, and we are stoked to take this step forward in Portland. The chapter will continue to advocate for a strong, working solution to curb plastic pollution by advocating for a ban on single-use plastics, and we would love your help! For more information or to engage in the campaign, give a shout!

Not sure why straws are so bad? Check this out.