The chapter is working to help pass statewide legislation to mitigate pollution caused by single-use bags.

A new bag ban bill, SD149/HD922 was introduced to the 192nd General Court of the Commonwealth of Massachusetts by Senator Eldridge and Representative Ehrlich.

Our MA Chapter campaigns team is meeting with the sponsors and allies to discuss the legislation.

On November 20, 2019, the Massachusetts Senate debated a redrafted bag bill that came from the Senate Ways and Means committee. After making a few amendments to the draft, the bill was voted favorably by the Senate to be engrossed, 36 to 4! Read the redraft, S.2422, here.

The bill still has significant hurdles ahead, and still needs to be taken up by the House Ways and Means committee. The House and Senate versions of the bill will need to be reconciled before the bill is able to pass. If no resolution can be found between the chambers, the bill will die.

On November 18, 2019, Senate Committee Chair of Ways and Means, state senator Michael J. Rodrigues, issued a memo calling for a favorability poll on a redraft of the redraft of the plastic bag reduction bill!

The new bill S2410 was voted Ought to Pass out of committee, re-establishing many of the required policy mechanisms for good bag law that were intact in the original bill heard by the Environment, Natural Resources and Agriculture Committee earlier this year.

Namely, the bill advancing would once again ban all thicknesses of single-use plastic film bags, and mandate a fee on all single-use paper bags sold.

Ahead of the senate floor debate scheduled for 11-20-19, we are advocating for tightening up of the definitions used for “reusable” and “single-use” bags to close loopholes.

Attentions will then be turning to the House Ways and Means Committee, which is still considering the June redraft out of the Environment, Natural Resources and Agriculture Committee. The House and Senate versions of the bill must be reconciled and voted favorably in both chambers, and then signed by the Governor, for the measure to pass.

HISTORIC COVERAGE OF THIS CAMPAIGN

Unfortunately, on June 21, 2019, the Environment, Natural Resources and Agriculture Committee released a redraft of H.771, now docketed as H. 3945, which amended what was a strong bill going into Committee with widespread support from industry, environmentalists and constituents from across the state, stripping it of all of the working policy mechanisms that would make H.771 a good bag law.

These amendments are unacceptable, and if advanced would render H.3945 a bad bag law that would set terrible precedent.

This bill was introduced (again!) in 2019 as An Act Reducing Plastic Bag Pollution (S.462 | H.771). The co-sponsor deadline was February 1, 2019 and the MA chapter worked hard to secure key influencers to support this iteration of the bill, which heading into assembly is very strong with a ban on plastic bags of all thickness specifications and a 10-cent fee on paper and reusable bags! Over a roughly two-week period, 98 legislators signed up to co-sponsor either the identical House or Senate versions of this bill! This includes 80 of 160 state representatives and 18 of 40 state senators. To put these numbers into context, this bill was the 33rd most sponsored bill this session out of more than 6,000 bills filed! The Chapter and coalition members nearly tripled the total co-sponsor count of 34 on analogous bills from the previous legislative session!

We are thrilled this level of legislative support because it truly reflects and grows from the incredible grassroots energy and activity in MA to reduce single-use plastic pollution. As of May 8, 2019, 109 local bag laws and counting have been passed in MA, covering nearly 50% of the state’s residents.

The bill came to hearing before the Joint Committee on Environment, Natural Resources and Agriculture on April 2, 2019, and we are now awaiting their vote and recommendations.

The map below was created by Surfrider Massachusetts Chapter volunteer vice chair and campaigns coordinator, Alex Vai, and shows the overlap between local bag laws (blue shading) and the districts with State House representatives who have co-sponsored An Act Reducing Plastic Bag Pollution (red hashing), current through February 2019. 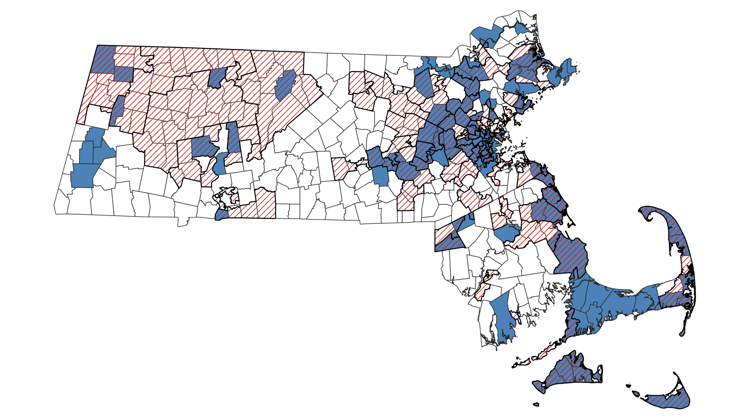 House Rep. Lori Ehrlich introduced a strong state bill to ban plastic bags in Massachusetts, which originally touted an effective date of July 1, 2017, fees on reusables and paper bags, and all out ban on plastic bags. Surfrider recommended a couple amendments to remove so-called “marine degradable” and “compostable” bag exemptions, and to add explicit penalties and remedies for noncompliance. That bill did not make it out of Assembly, but fortunately, Rep. Ehrlich and Senator Eldridge have sister bills before the General Assembly now that stand a good chance of passing.

The bill reviewed by the Environment, Natural Resources and Agricultural (ENRA) Committee contained strong language that would close the thickness loophole and encourage reusable bag use, by placing a fee on all bags given at point of sale in the state at retail establishments. The bill had a weak provision that only required retail establishments of 3K square feet or larger to comply through August 1, 2018. After August 1, 2018, single-use plastic bags would be banned, with the fee system in place for paper and reusable bags.

The redrafted bill that passed favorably out of the ENRA Committee by a vote of 13-1 on February 2, 2018, has its good and bad elements. The bad: the bill fails to provide remedy for violations of compliance, and was diluted significantly by removing the fees required for paper and reusable bags, which are essential components of working legislation to meet the goals of plastic pollution mitigation and a paradigm shift in consumer behavior away from single-use and toward sustainable re-use. Additionally, by rendering all existing municipal ordinances in Massachusetts null and void after the August 1, 2019 enactment date, many stronger bag restriction rules currently in place will be vacated upon enactment.

However, there are good elements and opportunities ahead for course correction: the bill closes the thickness loophole and bans thin-film plastic bags and paper bags that are not recyclable and made from recycled content, and specifically allows for municipalities to pass additional restrictions, such as the fees on paper that data proves are essential to incentivize the use of reusable bags, after enactment. The redrafted bill was strengthened significantly from the original draft in another section by removing the application of the law only to stores of 3,000 sq ft and larger and instead, applies to all retail and restaurant establishments - and not only in the 61 municipalities with current regulations but in all 351.

Additionally, the definition of “reusable bag” requires bags to be made of cloth or other machine-washable fabric other than polyethylene or polyvinyl chloride, which as noted above closes the thickness loophole we have seen exploited in many other areas, where bag manufacturers simply make thicker plastic bags to the new ml specification and give those thicker bags out for free, with the net result of the public continuing to use the thicker bags in a single-use manner, thereby creating even more plastic and contravening the intents of the law. Requiring bags qualifying as “reusable” to meet these machine washable specifications necessarily precludes the use of thicker plastic bags. This is a BIG win for the environment!

This is decent legislation that we support with an amendment to add the fee on paper bags, and it appeals to legislators across the aisle as it would be good for the environment by mitigating plastic debris and good for business by providing consistency for bag regulation for those doing business in the state. This bill would be precedent-setting, and we're working hard to try to get it passed.

Unfortunately, the bill came out of Committee on July 26, 2018, with the plastic bad reduction act struck from the report. H.4234 is still alive and kicking, however, as is its sister bill, S.424. The bill is before the House Ways and Means Committee.

Now that the assembly has adjourned, the bill formerly known as S.424 is dead. The good news is that legislators have already introduced a new statewide bag bill for 2019, and the MA chapter is at the ready to help drive the effort (see the top of this page!).

Get involved with the Surfrider Foundation Massachusetts Chapter to help lead the way on plastic pollution mitigation in Mass! The chapter meets beginning at 6:30PM on the first Wednesday of every month in Davis Square, Somerville. Please email vice chair and campaigns coordinator for more info.

Learn how a bill becomes law in Massachusetts and what to expect at the hearing by viewing this document!

The best way to support our work is to become a member of the Surfrider Foundation.

To get more directly involved in our efforts in Massachusetts, please give our chair a shout at chair@ma.surfrider.org. You can also visit our MA Chapter Facebook page to see when our next meeting or event is, and come on out!!! We need you! The ocean needs you! Get involved today!

Not sure what the big deal is with plastic bags? Learn more here: http://www.beachapedia.org/Single_Use_Plastics.