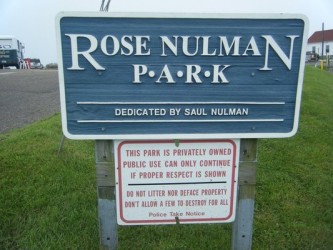 A bad surveying job erroneously landed a nearly 2-million dollar new home on private property that has been made available for public use by the Nulman family, at Rose Nulman Park in Narragansett, Rhode Island.

The oceanside Rose Nulman Park, which is located to the north of the Point Judith lighthouse (on the west side of the entrance to Narragansett Bay), affords an important point of public access to the beach and ocean in an area that is otherwise surrounded by cliffs and private property.

The owner of the offending property was ordered to move or demolish his house from the Nulman property; he appealed this decision.

The Surfrider Foundation Rhode Island Chapter intervened, led by the generous support of Attorney Brian Wagner, by joining the suit as amicus in late 2013 to support continued public beach access and the Nulman family.

On June 13, 2014, the Rhode Island Supreme Court issued its opinion in favor of the Nulmans, affirming the lower court's decision, calling for the offending structure to be demolished or removed in an appropriate timeframe.  The Court cited its gratitude for Brian's brief in a footnote reading, "This Court is indebted to amicus curiae the Surfrider Foundation for its eloquent and helpful brief."

Had the Court sided with the private property owner in this case, very bad precedent would have been set for parklands and public ocean access ways in Rhode Island.  Such a ruling could have encouraged other developers to build on public property without permission and then later try to get "after the fact" permission in court.

Many thanks to the Rhode Island Supreme Court for their ruling, and kudos to Brian Wagner for his excellent work on this case!