No More Single-Use Abuse in Portsmouth!

City Councilor Josh Denton was jazzed on the slew of bills before the NH General Court in 2019 that sought to finally push the envelope on mitigating needless pollution from single-use items either by enacting state law, by exempting plastic bags from home rule, or by clarifying the State's solid waste regulations to explicitly authorize New Hampshire's towns and cities to regulate single-use plastic and other items.

Did this mean that the City of Portsmouth will again see an ordinance proposed that would ban plastic bags and put a fee on paper and reusables?!? You betcha. On Monday, March 18, 2019, Councilor Denton introduced a new version of his last ordinance that calls for sweeping regulation of single-use items. The ordinance was voted 8 to 1 favorably to be sent to the City Attorney for review.

When the State bills were retained by Committee, however, Denton took matters into his own hands (again) and advanced a slightly amended version of his comprehensive ordinance aiming to mitigate pollution from single-use items, this time, taking a smaller bite by only seeking to regulate expanded polystyrene foam food packaging as a way to test political will in the City for exerting the authority that many assert already exists for municipalities to regulate single-use items.

In July 2019, City attorney Robert Sullivan reported back to the Council (again) that he is not confident enough in the state's solid waste regulation's municipal authorizing section to advance single-use product mitigation beyond properties owned by the City. In September 2019 the Chapter issued a letter to the Council from Attorey Joshua Lanzetta, stipulating to the existing authority for towns to regulate single-use items under the State's solid waste regulations. Then on Monday, October 7, 2019, the council voted 8-0 to advance a citywide ban on foam cups and food containers, taking effect in the end of 2020!

This win is an historic one for New Hampshire as it is the first town to test existing authority to regulate single-use items.

The Chapter is still supporting statewide efforts to clarify existing authority or exempt single-use items from home rule to embolden New Hampshire towns to take similar action, and to support statewide single-use mitigation bills moving through the General Court. Get active by emailing us!

New Hampshire law generally does not allow for municipalities to pass local legislation. So when the New Hampshire Chapter formed a committee of Surfrider activists and other environmental nonprofits in the Portsmouth area to work on a Rise Above Plastics themed campaign to ban plastic bags in the city, they first sought a legal opinion.

Surfrider's legal team and an independent NH firm both issued memos stipulating to a clause in the State’s solid waste law, whereby towns across New Hampshire would most likely be allowed to regulate single-use bags.

The Chapter led a strong campaign in 2014 and 2015 to gain support and collect data reflecting public opinion on this issue; this included feedback from local businesses that would be affected by the ordinance. The Chapter then ushered an ordinance to the Portsmouth City Council in 2015.

While the Council largely favored the legislation, which would ban single-use plastic bags and add a fee on all paper bags disseminated at the point of sale for certain businesses, the City Attorney advised that the town seek enabling legislation from the State, to avoid any potential future challenges.

Our Northeast Regional Manager located a similar effort occurring in Virginia, and the Chapter then presented a draft ordinance for consideration to state electeds, based upon this existing effort in Virginia. NH State Senator Martha Fuller Clark introduced SB410, an act relative to an optional ban on plastic bags, on January 6th, 2016. 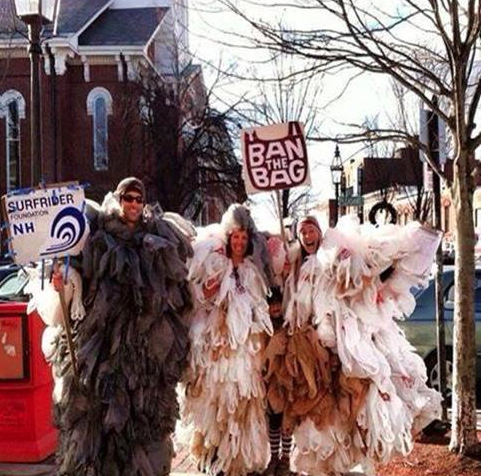 February 17. Our Northeast Regional Manager submitted testimony regarding the enabling legislation, and several NH chapter coalition partners and volunteers attended to testify about the need for better regulations for plastic bags.

Unfortunately, the committee voted 3 to 1 (with one senator absent) that the bill is Inexpedient to Legislate, meaning that when SB410 was brought to the Senate floor on March 3 for a vote, the Senate heard that the majority of committee members do not think SB410 should pass.

Because many Committee members stated they voted against the bill due to it being duplicative (because leading legal opinions state that the authority to regulate plastic bags already exists in the state's solid waste laws), the chapter regrouped to forge ahead to gain momentum again at the city level.

The Portsmouth City Council picked up the issue of a bag ban ordinance again, and the first reading was on March 6, 2017, but the matter did not advance due to the ambiguity of the City's authority under the State's solid waste regulations.

Concurrently in 2017, a group of ten NH State legislators introduced House Bill 481, AN ACT relative to the use of small capacity, light weight plastic bags by retailers, to the General Court. This bill attempted again to clarify authority for municipalities to regulate plastic bags. The public hearing was held on Wednesday, February 1, at 10:40AM in LOB Room 301 (map). Unfortunately, the NH State House Municipal and County Government Committee majority vote was 14-6, Inexpedient to Legislate, and when the bill hit the House floor March 8, it died, and the City of Portsmouth dropped their bag ban effort at the city level.

In 2019, we worked concurrently at the local level in Portsmouth, with Councilor Denton's single-use ordinance, and at the State level, urging passage of bills to clarify municipal authority to regulate single-use items, including adding a fee, and on a statewide bag ban and straws on demand bill. This trifecta approach should gain some ground, as it works to break the cycle of inaction by presenting options to the State with the additional influence of the City, which is ready to go with their ordinance and simply awaiting the clarification bill to pass. Learn more about the 2019 campaigns here: statewide bag ban; exempt single-use plastics from home rule; clarify solid waste regulations to expressly grant necessary permissions to towns to regulate single-use items.

Reach out to learn more and get involved!

Find out how YOU can help by emailing: nh@surfrider.org. Thank you!