The Maine Chapter worked with our Northeast Regional Manager to support the passage of LD252, An Act To Improve Safety in the Disposal of Expired Marine Flares.

Summary of LD252, An Act To Improve Safety in the Disposal of Expired Marine Flares:

The Surfrider Foundation submitted testimony during hearing to support passage of this important bill to help improve water quality and public safety of recreation users who enjoy Maine's waters.

Marine flares are pyrotechnic signaling devices used to signal distress from the water. They explode in similar fashion to a firecracker, and are generally launched from a flare gun. 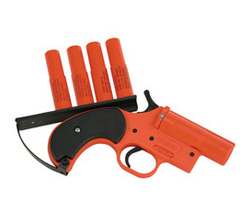 As explosives with hazardous chemicals, flares should be handled carefully and taken to a hazardous waste site for proper disposal.

Boaters must replace flares every four years, which creates a large buildup of expired flares in storage barns, garages and the like, because there's currently no easy or standard way to dispose of them properly.

Unfortunately, some recreational users toss their expired flares overboard into the water or soak their flares in water overnight and put them in the regular garbage for disposal - unwitting to the fact that many flares have a waterproof coating, meaning that water does NOT damage the flare, thereby leaving the dangerous chemicals active.

Flares are not only explosive, they are also hazardous waste. Putting soaked flares in the garbage could put them in contact with other chemicals, causing even more serious consequences. Gases that could be produced could also be hazardous to human health.

Tossing flares that have exceeded their expiration date overboard into the water means that all the hazardous chemicals and unexploded pyrotechnic may remain intact, presenting safety hazards to other recreational users - and eventually seeping toxic chemicals into our waterways.

The following commonsense disposal safety guidelines are recommended from marine flare manufacturers, and should be required by law to best protect our waterways and safety:

LD252 would require the Department of Public Safety to develop a disposal program to standardize safe disposal of expired flares to protect water quality and public safety, and to develop an education program to help promote the new process.

The House engrossed the bill as amended on April 25th, and the Senate on May 2 (click to see how your House Rep voted, and consider sending a thank you email, or message of concern). However, this Bill was returned by Governor LePage, together with objections to the same pursuant to Article IV, Part Third, Section 2 of the Constitution of the State of Maine, after reconsideration, the House proceeded to vote on the question: “Shall this Bill become a law notwithstanding the objections of the Governor?” With 84 having voted in the affirmative and 62 in the negative, with 3 being absent, and 2 excused, accordingly, the Governor's veto was sustained (Maine law requires 2/3 majority of both chambers' members who are present for the vote to overturn the Governor's veto. See how YOUR electeds voted here, and consider sending an email of thanks to the yays or concern to the nays/absent/excused!). On May 19th, this bill was killed by veto of Governor LePage.

THANK YOU to all who took action to help pass this bill! We're hopeful to help work in this issue again, down the road.

Learn how to submit testimony & please give us a shout for talking points and/or to get more involved in our work in Maine.

You can also volunteer with our chapter and join/renew your Surfrider membership to BEST support our work in Maine.