Beachfills, Dunes, and Seawalls Oh My!

A private beach club in Sea Bright, NJ is living up to its name since Hurricane Sandy.  It's called the Driftwood. That's what it will be after the next garden variety storm.  It was on the ocean side of the seawall.  Go figure. 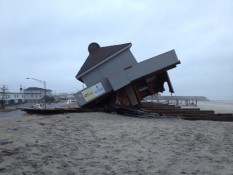 But the Army Corps designed and taxpayers funded an engineered beach in front of this seawall.  A big, wide, flat beach with no dunes.  Read my Op-Ed on that here.

Note the top of the seawall is at the lower left in this picture.  Oh wait it gets better.  These beaches were largely inaccessible due to the seawall, the lack of parking, and the private nature of these clubs. 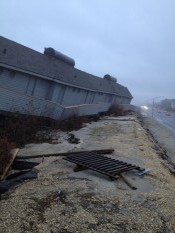 For much, much more in-depth reporting read this article from the Huffington Post, which features the Driftwood and much more.  http://www.huffingtonpost.com/2012/12/11/jersey-shore-development_n_2267557.htmler  This piece does a good job connecting the dots between weak coastal development regulations and the destruction from Sandy.

The opposite view of the Driftwood is on the right.  Leaning hard on the seawall.  Maybe it will fall on to Rt 36 / Ocean Ave below.