The U.S. Senate is expected to vote in the coming weeks on a Water Resources Development Act, or "WRDA" for short.   The bill, S. 601, contains critical restoration projects, but also a number of provisions that would undermine the ability of the public and agencies to influence Corps of Engineers projects.  The bill also potentially allows for indefinite extension and expansion of ongoing beach fill projects without proper review and it contains provisions that shift costs of river and harbor dredging from private companies onto the taxpayers. 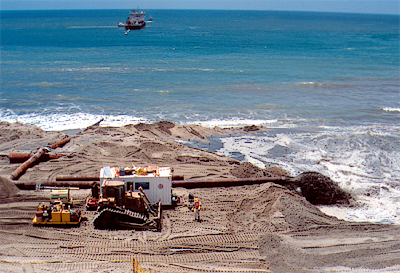 Harmful Environmental Streamlining
In an effort to speed up approval and construction of projects this WRDA has 'environmental streamlining' provisions (sections 2033 and 2032) that strike at the heart of the laws that provide for meaningful agency and public engagement in Corps projects. The streamlining provisions let the Corps set their own timelines for federal agencies to provide reviews of impacts to natural resources, and can fine those agencies if they miss deadlines.  This will make it difficult for those resource experts to raise legitimate issues about Corps projects.  The streamlining also could put the Corps in charge of endangered species reviews, instead of the US Fish and Wildlife Service, in an effort to expedite project delivery.  The Senate committee approved bill language that strikes at the core of NEPA by sharply tilting the scales toward approval of projects, regardless of potential environmental damage. It sets unreasonably short deadlines for completing reviews, which will inevitably bias agency officials toward rubber-stamping projects to avoid the bill's harsh new fines.

Indefinite Extensions of Beach Projects
The Corps of Engineers frequently commits to maintaining beach fill projects for 50 years.  Essentially they come back every few years to dump more sand to create an artificially wide beach, burying nearshore habitat and the sandbars we surf on over and over.  There are areas on the East Coast, primarily in New Jersey, where a few of these projects are nearing the end of their 50-year agreement.  This bill creates a process to allow the Corps to continue pumping sand for at least 15 years, and possibly indefinitely, without proper review and reduction of the impacts they have seen over the years.  So rather than looking back at the 50 year history of these projects and taking time to adjust to changed conditions or learn from their experience, the Corps is being told to just keep doing what they're doing.

Taxpayer Give-Aways for Dredging
This is also a very industry-favorable bill.  The bill saddles the federal government with having to pay for more harbor dredging activities (like disposing of toxic dredged materials), and pay for more of the costs to deepen ports, that are now the responsibility of the port industry and private interests.  This change will likely lead to a massive amount of permanent, unnecessary and ongoing dredging that could result in large-scale damage to the nation's most important estuaries, while exploding taxpayer costs.  It is also unclear what would happen to all of this dredged sediment, and some of it may end up choking our beaches and nearshore.

What's Next?
Unfortunately, since the bill passed out of the Senate Environment and Public Works Committee with bipartisan support from Chairwoman Barbara Boxer (D-CA) and Ranking Member Vitter (R-LA) we have a hard road ahead to get these harmful provisions out of the bill.  Surfrider Foundation has signed onto a letter from 132 organizations to all senators insisting that the bill be cleaned up or stopped entirely.  We have also signed on with other environmental voices in California on a letter to Senator Boxer.

You too can help by calling your Senator and telling them:

1 - WRDA should not advance in its current form;

3 - Support amendments to better protect people and wildlife in the bill.