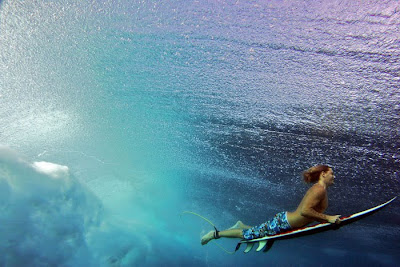 Any surfer who has leaned over to pick something up a few hours after surfing, only to suffer the embarrassment of having their nose drain all over the place, is a walking illustration of just how much ocean water surfers are exposed to when practicing their sport.

Here’s a list of five reasons why surfers are more likely to get sick from polluted ocean water than other beach goers:

1. Surfers go to the beach & go in the ocean more than other beach goers

According to the 2001 Current Participation Patterns in Marine Recreation study, beach goers average 14 visits per year; in the same study surfers averaged 23 visits per year (Leeworthy and Wiley 2001).

Studies and common knowledge show that beach going is highly seasonal. Most visit occur during the summer months. Often more than half of the total visits occur during the 3 months of summer. In contrast, surfers tend to visit beaches and enter the water year round. In some places, surfers are the predominant beach visitor during winter months. This is significant because in the northern latitudes, winters tend to be more rainy than summer months, which increases the exposure to storm water runoff.

3. Every visit to the beach to surf results in full immersion in the ocean

According to Dwight et al. (2007) less than half of Southern California beach goers are exposed to ocean waters. And of those that are, many are not fully immersed in the water. Surfers, on the other hand, are fully immersed while surfing (see photo). This increases their exposure to pathogens if the water is polluted.

4. Surfers probably spend more time in the water on each visit

Surfers tend to surf between 1.5 and 2 hours surfing during each visit. Although I am not aware of any data, my guess is that this is longer than most beach goers spend in the water, with the exception of some kids who seem to spend the whole day in the water (especially in places where the water is warm).

5. As a result of the above, surfers ingest 10 times more water than swimmers or divers

As summarized here, surfers tend to ingest 10 times more water than swimmers or divers. To their exposure to pathogens in the water is much higher than other groups. The repeated, full and sometimes violent immersion in the ocean that surfer experience increases ingestion and water getting forced into the sinuses (thus the delayed nose drip).

The combination of more days of exposure, during some of the most polluted times, and more complete immersion and ingestion increases the total exposure of surfers to pathogens and therefore the odds of getting sick. So the next time your nose starts to drip, think about the quality of the ocean water that just sat in your head for the last several hours - hopefully it was clean!

The papers referenced below provide a more in-depth look at these issues.