How do cesspools pollute coastal watersheds?

Despite how highly we value our beaches in coastal communities across the country, coastal water quality continues to be threatened by discharges of stormwater and sewage.Years, decades even, of neglect, have left America’s wastewater infrastructure in disrepair, outdated and failing. Sewage spills and failing wastewater infrastructure threaten coastal water quality by discharging raw and under-treated sewage into local waterways and the ocean.

Many communities are not even connected to sewers but instead rely on cesspools and septic systems. These antiquated systems never adequately treat sewage but instead allow household waste to leach into ground and surface waters.  Approximately 25% of U.S. households are still serviced by these disposal systems, and nearly 50% in some states, especially in rural areas.  And we’re not just talking about farm country here.  There are nearly 88,000 cesspools in Hawaii that discharge 53 million gallons of sewage into coastal waters every day. On the East End of Long Island, there are approximately 360,000 on-site sewage disposal systems of which 250,000 are cesspools - basically no more advanced than a deep hole in the ground.

Join us and ask Congress to invest in upgrading America’s failing sewage infrastructure and to protect our coasts and our communities. Send your email here.

This blog post is the first in a series that will explain how the most commonly used wastewater systems fail and pollute our coastal watersheds and the ocean with sewage.

The #1 water quality problem in areas serviced by individual wastewater systems like cesspools and septics is nitrogen contamination of fresh and marine waters. Cesspools are basically lined pits in the ground that receive household wastewater. When cesspools are situated properly and functioning as best they can, the liquid effluent leaches out of the tank without any pretreatment and into the surrounding soil. As the liquid sewage percolates down into the ground, most of the pathogens (bacteria, viruses, etc) are filtered out or bind to dry soil particles. The effluent that eventually reaches the groundwater is heavily polluted with nitrogen (and some phosphorous). The nitrogen-laded groundwater flows downstream towards surface waters like lakes and streams, and ultimately the ocean.

High levels of nitrogen in waterways have severe impacts on coastal ecosystems. The nitrogen acts as a fertilizer, causing algae blooms that deplete the water of oxygen when their plant mass decomposes and often causing mass die-offs of fish, turtles and other aquatic life. In tropical regions, the algae smother coral reefs and cause these highly valuable systems to fail. In more temperate regions, high levels of nitrogen in the water lead to the decline of sea grass beds that provide nursery habitat for many important fisheries. Eutrophication, or over-enrichment of nutrients, in coastal waters has also lead to an increase in harmful algae blooms that produce toxins that contaminate shellfish, cause fish kills and other sea life to die, and even threaten human health through recreational exposure with a whole suite of symptoms. 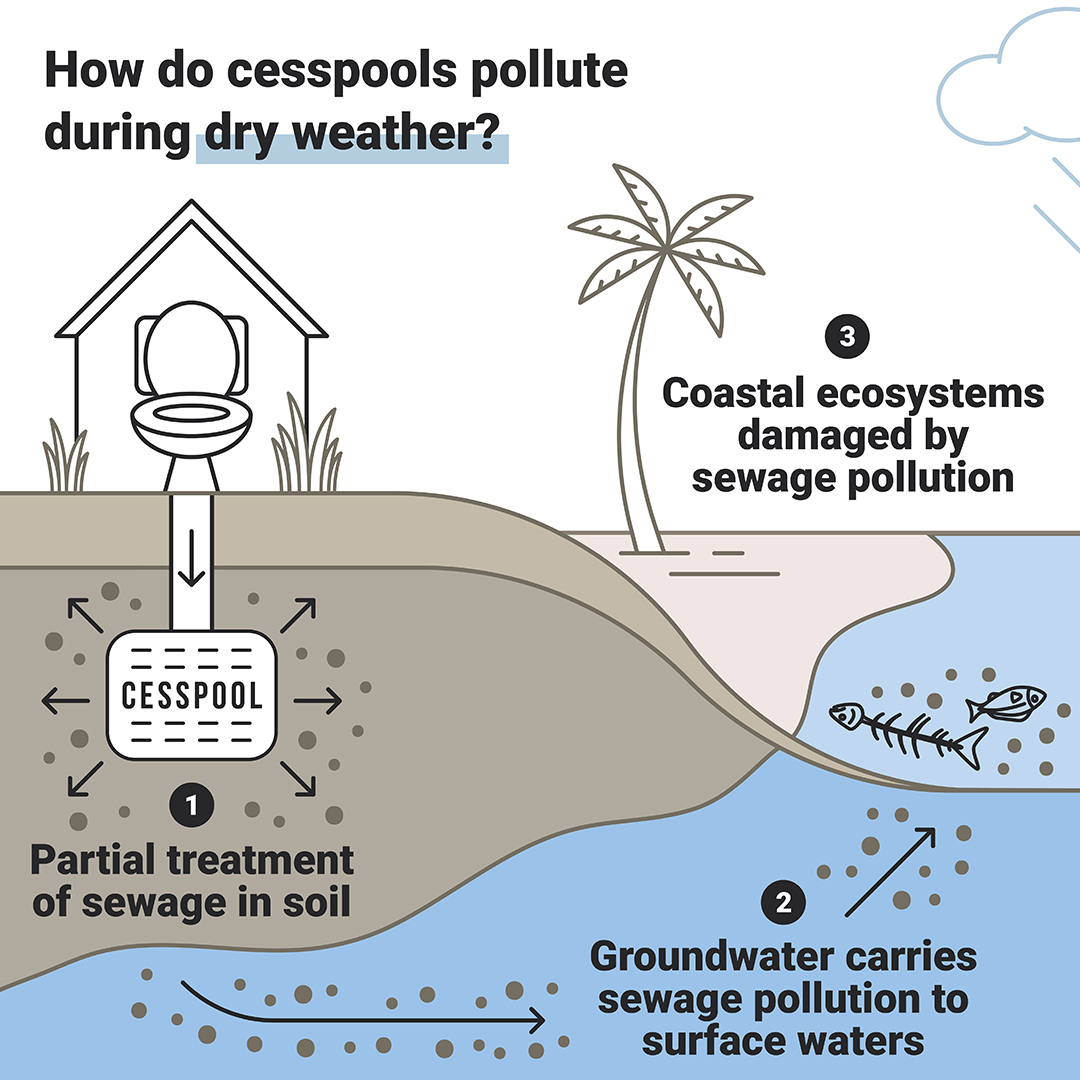 During wet weather that causes local flooding to occur, cesspools can even discharge sewage pathogens harmful to human health into our recreational waters.  Flooded conditions can raise the water table so that there is no dry soil between the cess pool and groundwater and thus no filtering of pathogens.  Under these conditions, cesspool effluent containing pathogens and nutrients is directed straight into surface waters via groundwater.  If runoff at the surface is significant enough to saturate the top layers of the soil, cesspools can also leach out directly into stormwater runoff and end up in surface waters even quicker. It is during these wet conditions that cesspools not only pollute coastal waters with nutrients that disrupt ecosystem balance but these systems also put human health at risk by discharging sewage pathogens in recreational waters as well. 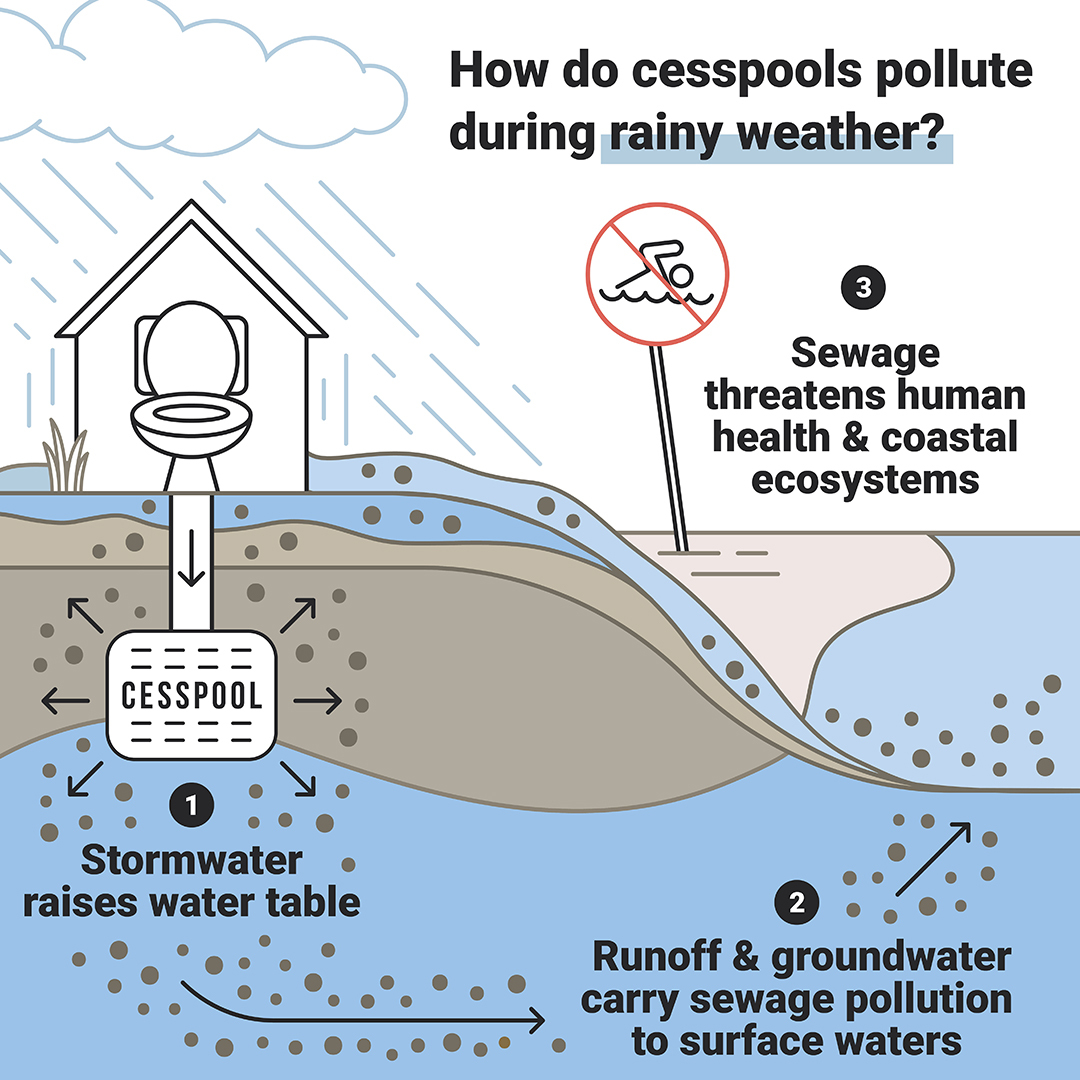 Cesspools that are located close to the beach or surface waterways like rivers or creeks are more likely to put public health imminently at risk than systems located further inland. Sea level rise and extreme weather events associated with climate change will exacerbate this already critical situation. Many communities have developed management plans to prioritize waterfront zones to maximize the benefits of limited funding for wastewater upgrades. Better management of stormwater, by encouraging rain to soak into the ground through green infrastructure and low impact development practices is also needed to reduce the impacts of sewage and polluted runoff in coastal communities.