The Newport, Oregon Blue Water Task Force (BWTF) lab, established in 2000, currently monitors water quality at 13 sites from Yachats to Otter Rock. The Newport BWTF lab is housed at the Oregon Coast Aquarium. Water samples are collected on a weekly basis by Surfrider volunteers and samples are processed by the Aquarium’s High School Student Scholars. The Otter Rock site tracks water quality in Otter Rock Marine Reserve, a very special place for the Newport Chapter where they frequently hold beach cleanups and an annual youth surf competition. Over the past 20 years, the Newport Chapter has established strong working relationships with state agencies and city government to build community awareness and start tackling local pollution problems.

The Newport Chapter also supports a BWTF lab in Depoe Bay housed at Neighbors for Kids (read this full story on how this lab is empowering youth to become scientists and stewards of the Oregon coast).  You can see all the beaches and sampling sites monitored by the Surfrider Foundation in Oregon on the Blue Water Task Force website.

Recently, Cheri Brubaker, a reporter with the Newport News-Times, went into the field with Newport BWTF Coordinator Bob Trusty. After collecting some samples, the youth in the Depoe Bay lab showed Cheri how they process the samples and read the results. Cheri's story goes beyond the process of collecting and testing samples and explores the value of BWTF to the community via interviews with the Public Works Director and Mayor of Newport. Her full story is available on the Newport News-Times website and is pasted below:

The work of the Newport Chapter of Surfrider Foundation’s Blue Water Task Force (BWTF) is an example of the effectiveness of citizen science, the power of enlisting passionate volunteers and how, with a productive relationship with city management, improvement is made to ensure citizen safety.

“Dedicated to the protection and enjoyment of the world’s ocean, waves and beaches through a powerful activist network,” Surfrider’s website (surfrider.org) explains. “We’re moms, we’re surfers, we’re kids and teens…we’re you. We’re engaged to protect what we love: oceans, waves and beaches.”

The BWTF collects and tests more than 400 water samples per year in locations between Seal Rock and Lincoln City. Bob Trusty is the Newport BWTF coordinator, instructing the volunteers on safe water sampling.

“Never turn your back on the ocean,” Trusty cautioned as he waded into the water beneath the stormwater outflow at Newport’s Nye Beach, sampling the water and measuring the temperature.

“Without Surfrider doing this testing, we wouldn’t know,” said Newport Mayor Dean Sawyer of the results BWTF provides the city. “We don’t have the money or the staff.”

Sawyer continued, “The bottom line is we would like to have all those outfall readings at zero. We don’t want tourists coming down here and not being able to go on the beach.”

“Over the past several years, the city has done smoke testing of the storm and sanitary sewers, dye testing and televising with condition rating to identify locations where bacteria or sewage could be entering the storm sewer system,” said Tim Gross, Newport public works director.

Notable, also, is how Surfrider includes future scientists in the process, reaching out to local students. The Oregon Coast Aquarium’s Student Scholar’s Program reads samples that are collected by adult volunteers.

At Neighbors for Kids, an after-school program in Depoe Bay, students as young as six years old process and read the water samples, learning proper laboratory procedures such as dilution and pipetting and understanding causes and effects of bacteria in water. 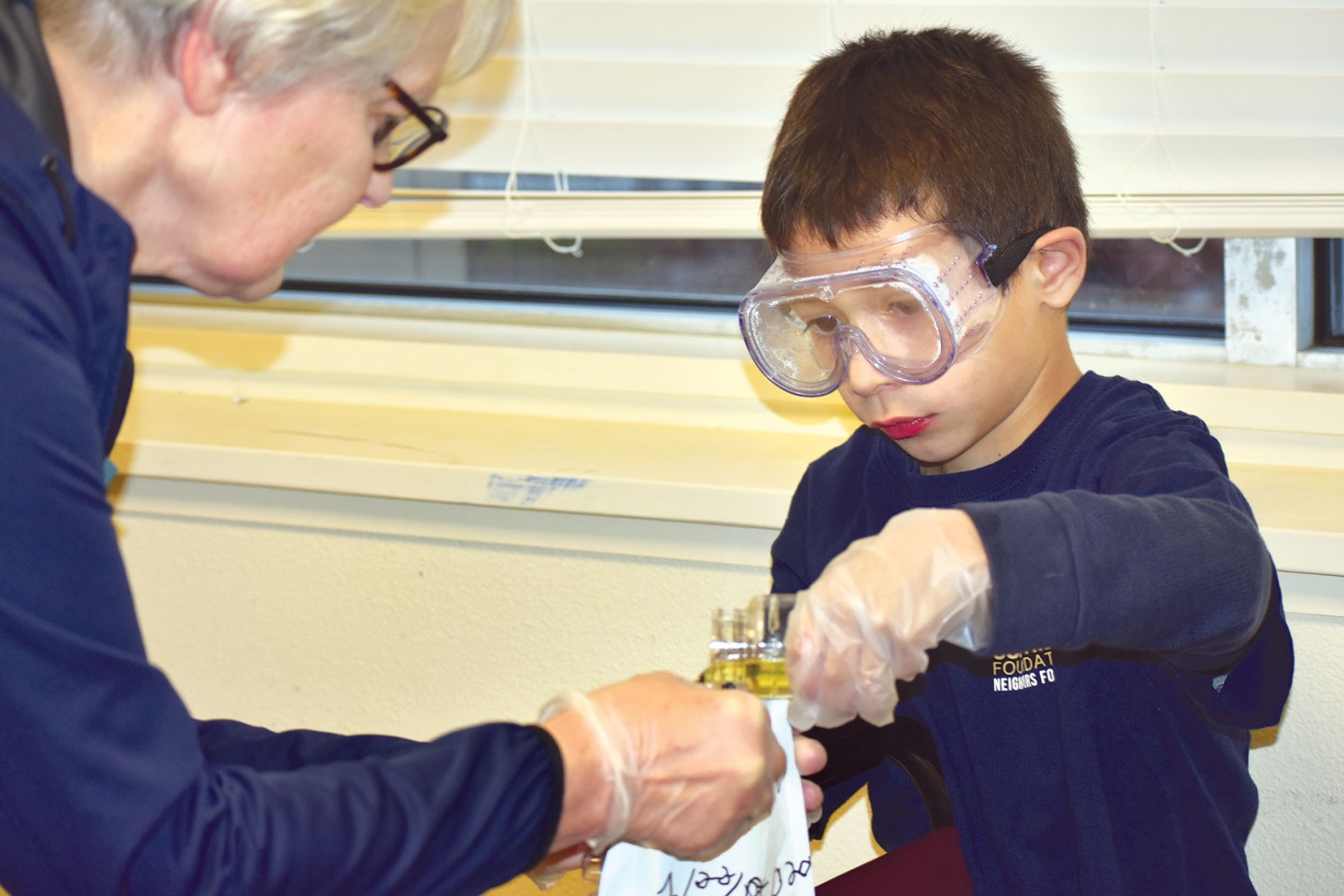 Karen works with a youth volunteer to process samples.

On Wednesday, Jan. 22, students seemed disappointed that the samples were negative, indicating no bacteria.

“Negative is good,” an adult volunteer reminded them after they read and charted the results. However, the students indicated that it was more exciting and colorful (the sample turning blue when bacteria is present) when the results are positive. 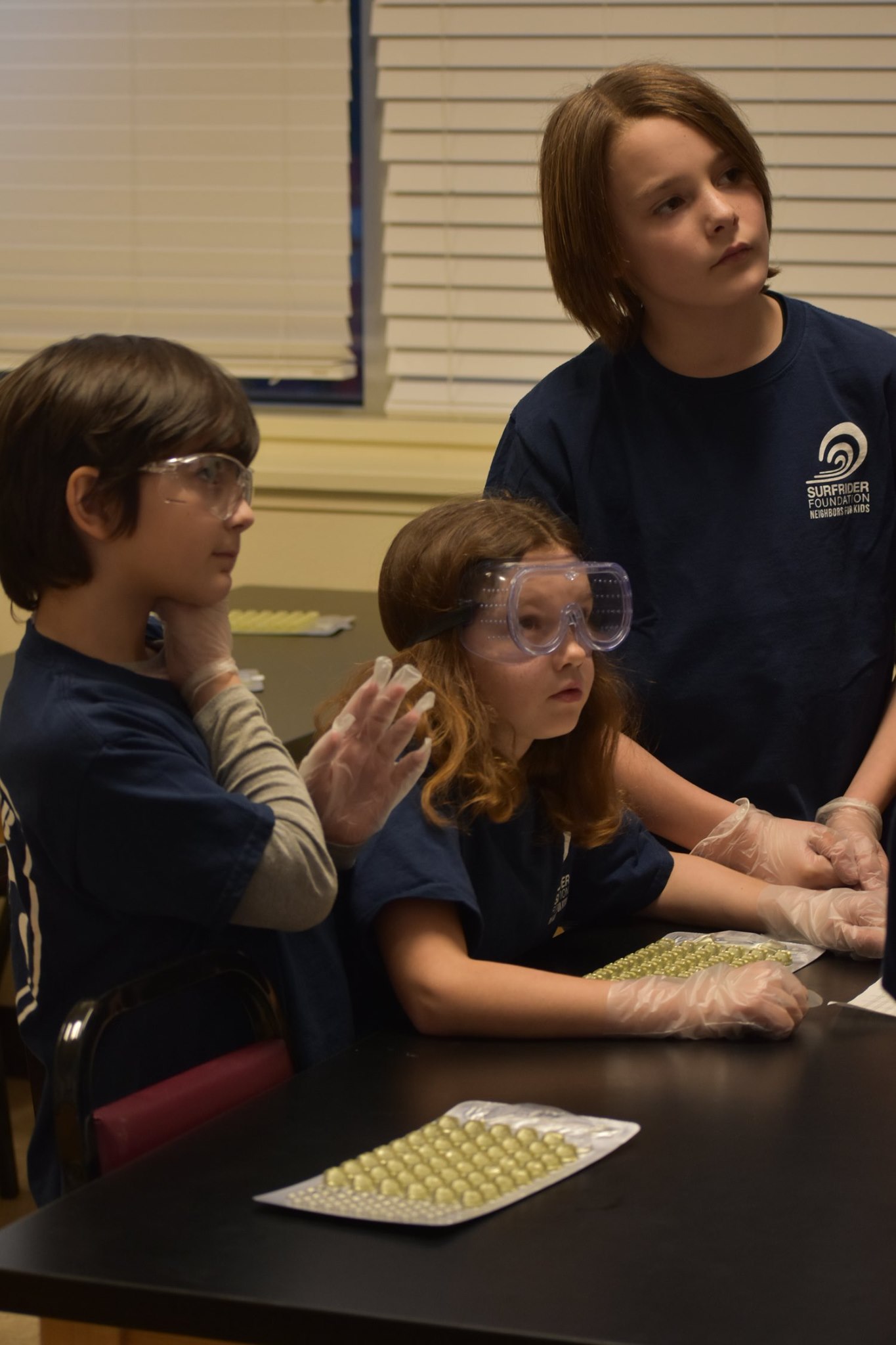 Neighbors for Kids youth volunteers discuss the results of the water samples.

“February is coming,” one student said, explaining that last February saw many positive results, predicting that they will see positive samples next month.

Goodwin noted that in the latest round of testing, Elizabeth Street in Newport was the only site with high bacteria. She said that because the site has low outflow, they don’t believe the issue is caused by infrastructure.

General information about Surfrider and its efforts can be found at surfrider.org. Locally, the best way to get involved is to contact the Surfrider’s local volunteer coordinator at volunteercoordinator@newport.surfrider.org.