There is a storm water outfall at the end of Ecola Court, Cannon Beach that discharges onto a popular beach near Haystack Rock.  The discharge from the outfall flows across the sand in a shallow creek until it meets the Pacific Ocean.  This shallow water is a favorite play area for young children, whose unsuspecting parents let them play in this often times contaminated water.  View Surfrider's BWTF data from this recreational spot here. 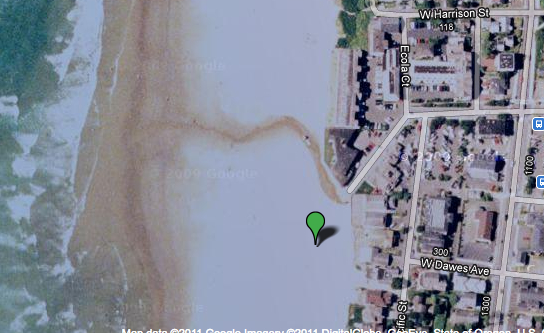 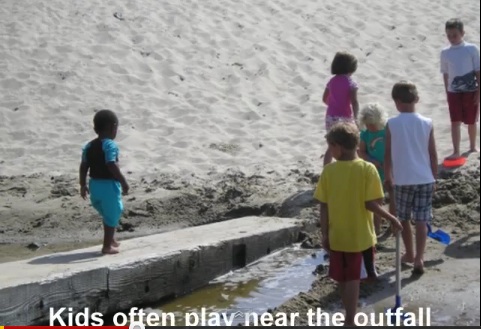 The Surfrider activists and students at Astoria High who run the BWTF water testing program have been urging the City for nearly two years now to figure out what is causing the pollution and to provide better warning to the public of the contamination.   Previous blog postings have highlighted a video montage put together by the students to document their sampling program and the pollution problem at the Ecola Court outflow.  They were also successful in getting the local press to cover this issue in early 2010.

Now with similar recommendations being made by the Ecola Creek Watershed Council, the City is researching their best option to do some source-tracking work to identify the cause of the pollution coming out of the Ecola Court stormdrain.  In the meantime, they will be installing some bio-filters to help reduce the bacteria load in the stormwater discharge.  These filters employ a technology dubbed Mycofiltration and rely on fungus mycelium to uptake the bacteria out of the water.  Read more about Mycofiltration on Wikipedia.

The below story from the Daily Astorian describes the City of Cannon Beach's recent plans for dealing with the pollution at Ecola Court. 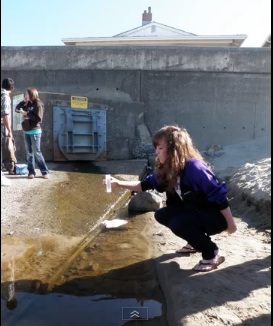 CANNON BEACH — The Ecola Creek Watershed Council will ask the city of Cannon Beach to hire a consultant to investigate the source of contaminants at the Ecola outfall pipe in midtown.

The association’s board voted unanimously Monday to write a letter requesting that the city prepare a request for proposals to submit to consultants within 60 days and that a consultant be hired by the end of the year.

Watershed council members noted that it had been at least four years since they first approached the city to investigate why weekly bacteria tests in the storm water sometimes turn up numbers that prompt state health advisories.

The fecal coliform bacteria found in the water can cause infections and problems with the gastrointestinal tract in humans.

The storm water coming from the outfall pipe that flows onto the beach west of Gower Street is separate from the city’s drinking water.

A recently released list of recommendations from the Clatsop County chapter of the Surfrider Foundation suggests that more needs to be done – including hiring a specialist — to find the contamination source.

The foundation, which monitors beaches along the Oregon Coast, has been working with the city of Cannon Beach since 2009 on the contamination problem.

In addition to weekly tests conducted by the state, the city conducts its own weekly tests. It also submitted DNA samples to Oregon State University labs and found that most of the contamination is from gulls. However, one sample proved positive for human contamination, but the OSU report called the sample “very weak.”

“At this point, we feel that much of the data collected isn’t giving us any solid direction for where contamination points are highest and what the major sources could be,” the foundation’s report says.

Council Chairman Mike Manzulli said he was concerned that a sample showed human contamination. “It’s upsetting,” he said. “For three years, I have been hearing that there was no human waste.”

“There’s always the financial consideration,” See said. But if a local specialist can be found who knows where to search for the source, the city may head in that direction, possibly even this year, he said.

“It’s got to have some end where there is a possibility of finding something,” See added.

Although the Surfrider Foundation has suggested a West Virginia company that specializes in such work, See said he hoped to find someone local who the company might be able to train.

“This is not something that just anyone can do,” See said.

Last week, See told the Cannon Beach City Council that the public works department planned to place 40 bags containing fungal mycelium mixed with an alder chip mulch into the pipe. The mycelium is expected to remove bacteria from the water and feed on it, while the water emerges from the pipe with fewer contaminants.

However, Manzulli said that, while the plan might reduce the contamination, “it doesn’t get to the root of the problem, and that’s a concern to me.”

The Ecola Creek Watershed Council also will ask the city to change the wording in signs posted at the outfall. Children often play in the stream, and adults wash off their feet before they walk on the pavement nearby.

The signs caution passersby about untreated stream water and tells them to “avoid prolonged contact.”

The Council will suggest that stronger language should be used, such as “Warning: Avoid Contact.”