Plastic pollution is a serious environmental and public health threat across the Hawaiian Islands. While localized land-based sources contribute to plastic pollution in Hawaiʻi, a significant amount is also derived from ocean-based sources, most notably commercial fisheries. Yet given its international scope, large geographical range, and difficulties in tracing the source of gear, derelict fishing gear remains a challenging problem.

Hagfish are eel-like scavengers that are important to cleaning the ocean of dead carcasses. As bottom-feeders, these primitive fish are typically found in cool, deep waters. To protect themselves from predators, they produce a thick, mucus-like slime. Hagfish are considered a culinary delicacy in Korea (“gomjangeo“) and their skins are turned into “eel-skin” products like boots, wallets, and purses.

Hagfish traps represent one of the many types of commercial fishing gear that pollute Hawaiʻi coastlines. In 2021, Surfrider Foundation’s Kauaʻi Chapter and partner organizations Hawaiʻi Wildlife Fund and SHARKastics have already removed an estimated 3,000 hagfish traps from shorelines on Kauaʻi, Hawaiʻi, Maui, and Lanaʻi. Compared to other types of fishing gear, however, the hagfish trap’s distinctive cone shaped funnels are easily identifiable and originate from small fisheries on the west coast of North America and in east Asia, mainly Korea. The animals are sold almost exclusively to Korean markets for food or use in “eel skin” products such as wallets and boots.

Not only do the traps contribute to the global plastic pollution pandemic, but they are also responsible for harming marine animals, notably endangered Hawaiian Monk Seal pups. Young Hawaiian monk seals may get the funnel-like trap parts caught on their snouts, causing abrasion, infection, starvation and eventually death. In the last twenty years, 13 seal pups and one yearling have been found entangled by hagfish traps in the Northwestern Hawaiian Islands. This number of monk seal entanglements in hagfish traps, however, is likely an underestimation.

In an effort to reduce the number of hagfish traps washing up on Hawai'i coastlines, the Surfrider Foundation Hawai'i Chapters launched the regional North Pacific Hagfish Trap Project in early 2021. The effort is continuing to expand as Surfrider Foundation chapters and staff along the West Coast join the collaboration.

Surfrider Foundation is encouraging beach cleanup organizations and individuals to get involved by:

By contributing to this project, the public and Surfrider Foundation Chapters can help us take the first steps towards identifying the source of hagfish traps washing up on Hawai'i coastlines and ultimately collaborating with hagfish fisheries on equitable solutions to reduce the number of lost or discarded hagfish traps. 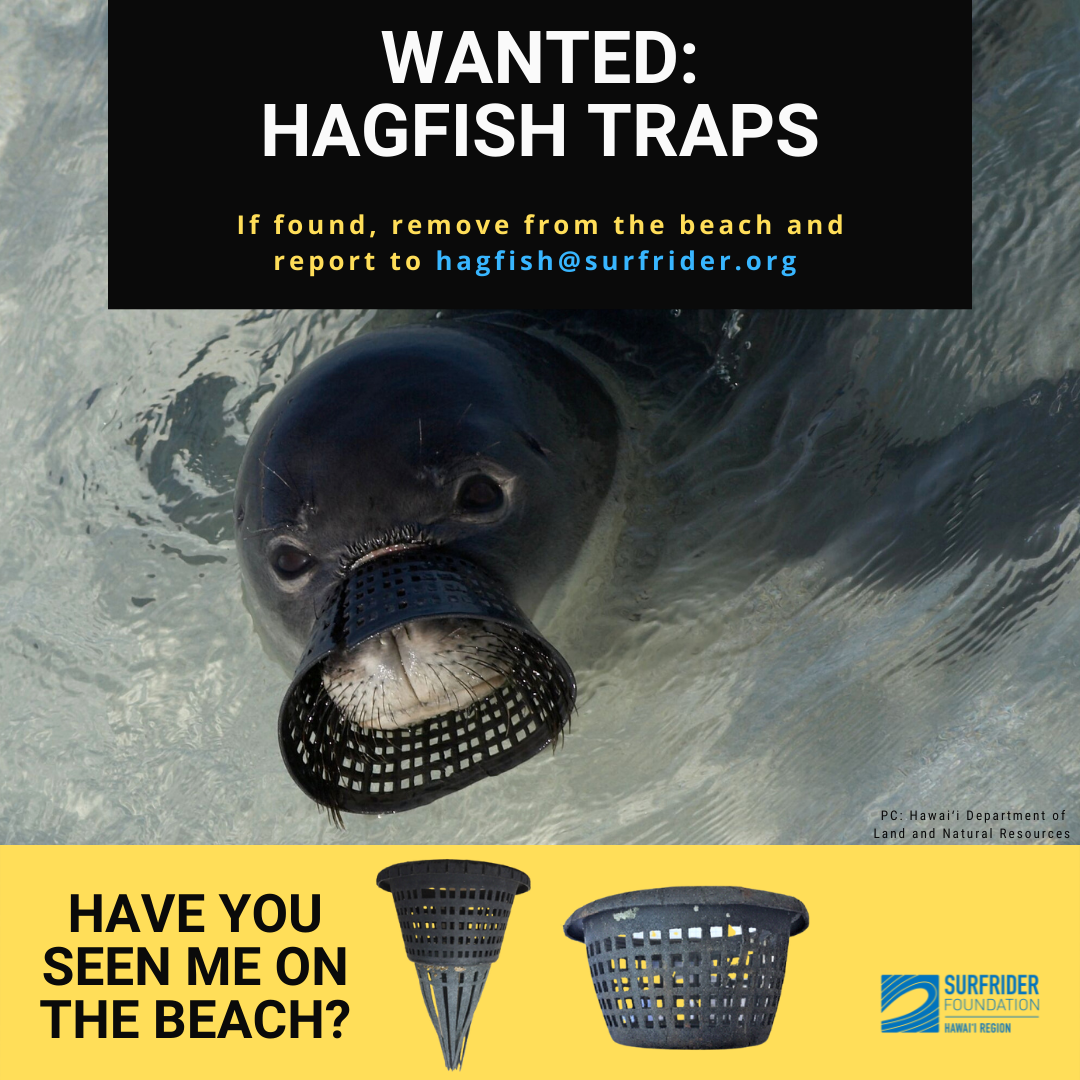