Poop to Power in Orlando

While we've blogged a lot on closing the wastewater loop via indirect potable reuse and reclaimed water use, there has been less attention paid to the solid side of things.  Traditionally, "biosolids" have been utilized as soil amendments and have occasionally been used as a supplemental fuel in such industrial processes as cement kilns.  Now comes word out of Florida of a new "supercritical water oxidation" process that uses oxygen at high temperatures and pressure to destroy the organic solids.  The final products of this process are carbon dioxide, inorganic salts and pure water. Another byproduct is heat, which can be turned into enough electricity to power over 1,000 homes. 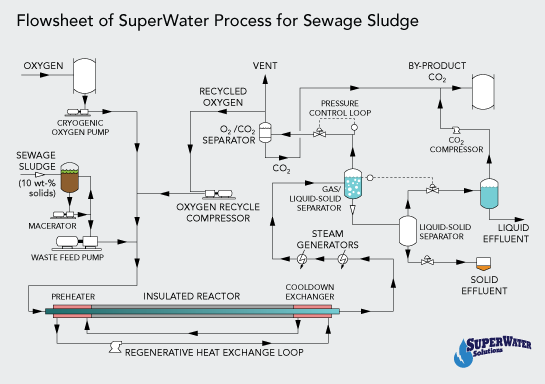 This process is being tested in a five-year, $8.5 million project with a small, experimental test plant near Orlando, Florida. A company called SuperWater Solutions says the technology is now ready to be taken to the commercial market, with the potential for full-size treatment systems built around the world. Orlando will likely be the first customer, with construction of a full-size unit by 2013.