SOS Biscayne Bay In Miami Is In Distress

On an idyllic Sunday afternoon, Surfrider Miami Activist Sean Drake stands in his neighborhood of Morningside. On any normal weekend day you’d observe a body of water teeming with life and plenty of people enjoying watersports and picnics shoreside. On this particular Sunday however, the picture is near apocalyptic. The stench is unbearable from tons of dead and decaying marine wildlife. The scene is soul-crushing.

Aerators and their operators have been standing by at Morningside Park to breathe life back into lagoon-like Biscayne Bay, after a week of historic fishkills have left no life to be seen.

“The most 2020 thing so far…Biscayne Bay on a ventilator,” exclaims Sean Drake on his Instagram story. Drake has been a waterman most of his life– swimming, kayaking and paddleboarding in the Bay. He ultimately joined the Surfrider Miami Chapter’s Executive Committee in 2019, after deciding he needed to do more to protect the ocean he so enjoys. 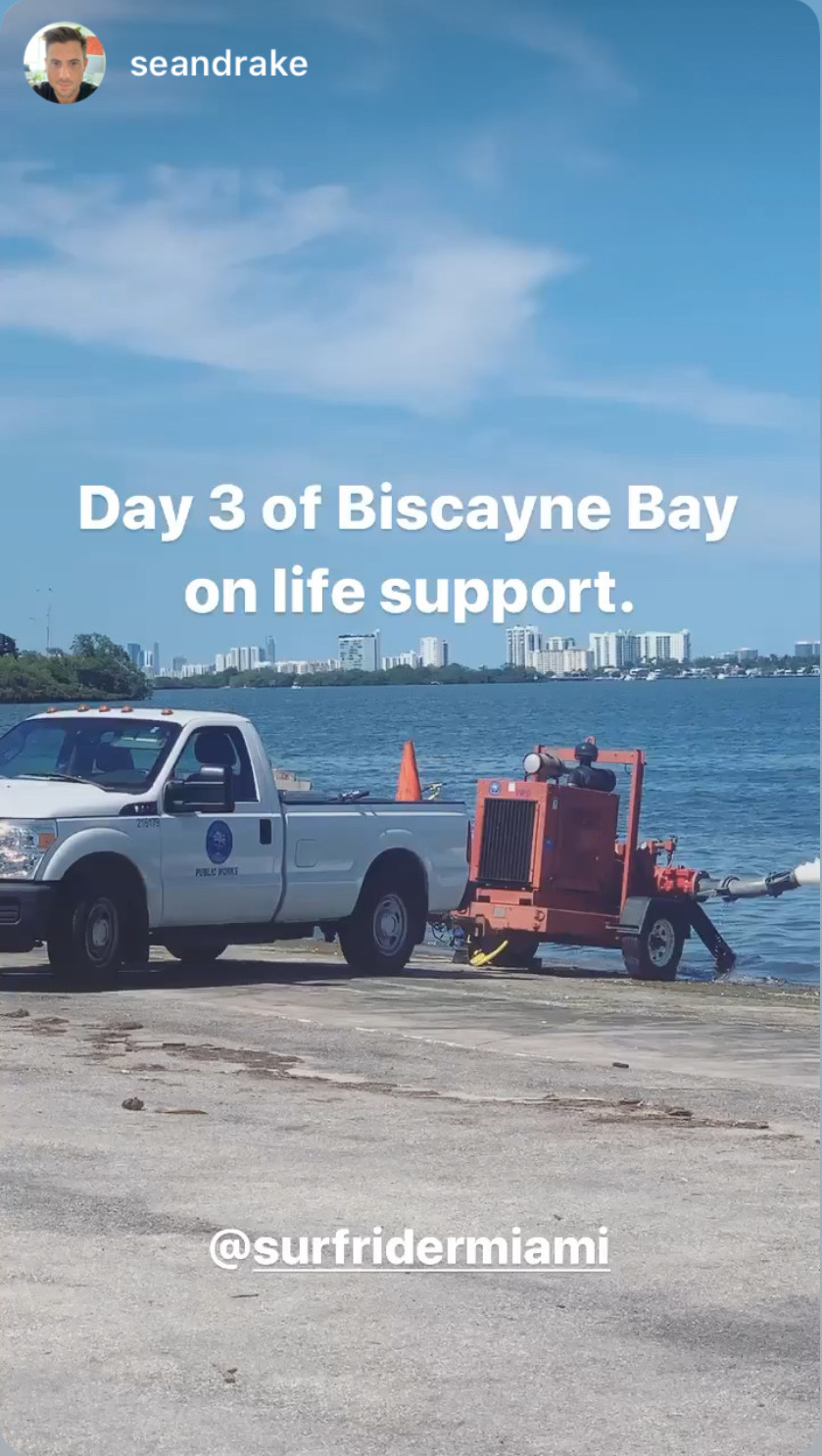 The devastating fish kills this week have led to an incredible amount of activity for the Miami Chapter.  Their entire executive committee and core group of activists have activated around advocating for solutions to save Biscayne Bay. Within minutes of the first devastating images hitting social media, Chapter Chair Seth Bloomgarden’s phone began working overtime, as he fielded hundreds of inquiries from concerned citizens who wanted answers: “What is happening in the Bay?” “This is not normal!” exclaimed residents of Miami Dade County. 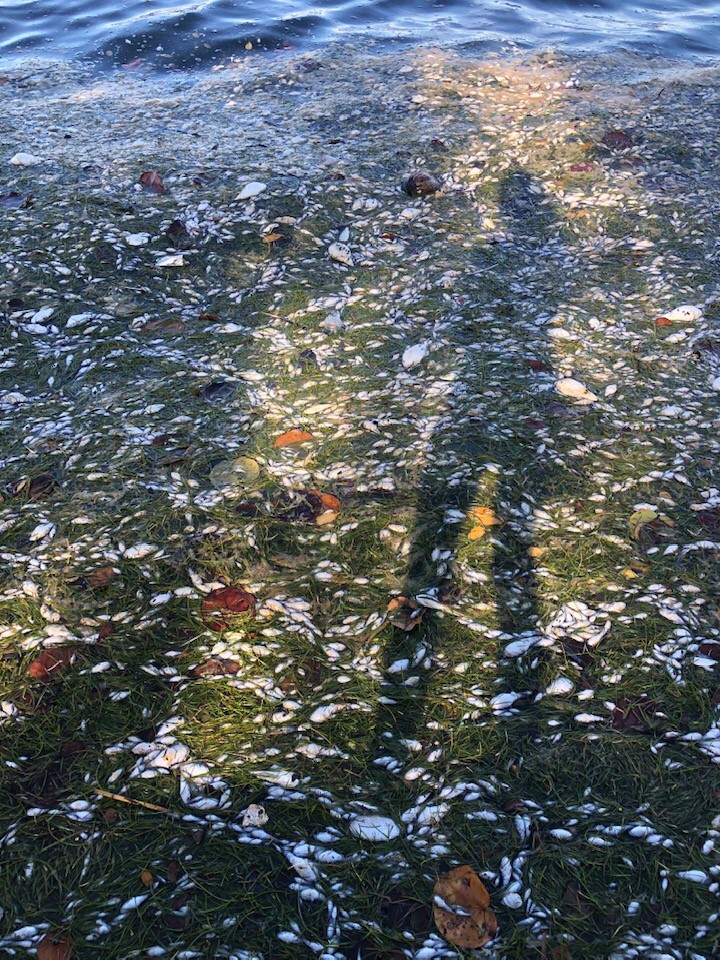 For years, the Miami Chapter has advocated for fertilizer restrictions to reduce the flow of nutrients into Biscayne Bay and other local waterways. Biscayne Bay suffers from high nutrient levels and is likewise affected by fecal bacteria from Miami Dade County’s sewage outfalls, which discharge treated wastewater three miles offshore.

Like the rest of South Florida, Miami experiences far too many sewage failures and spills year after year, which has taken its toll on the Bay.

Environmental groups, including Surfrider’s Miami Chapter, have worked hard to raise public awareness of the impacts of these sewage spills on local water quality conditions and public health, but like most coastal cities whose economy depends so heavily on tourism, there are concerns over what the impact will be to local businesses that depend on tourist dollars.

In 2020, the Coronavirus pandemic changed everything, with local governments forced to take harsher measures to ensure public safety. Miami even experienced never before seen beach closures.  As COVID-19 infections rose in the Magic City, the beaches remained closed for months. When the beaches finally reopened locals rejoiced, and in many ways we’re seeing a renaissance, a rebirth of locals who seem more committed and concerned with the health of their public beaches and waterways. “Maybe it’s true what they say, you don’t know what you have until it's gone, and now the locals seem to want to be more involved,” notes Ryan Darling, a South Florida resident and longtime Surfrider supporter.

Reports from the Florida Wildlife Commission and Florida’s Dept. of Environmental Protection revealed a lack of oxygen is to blame for the dying wildlife in the bay and it’s been attributed to an unusually warm summer. In June, the City recorded its hottest week ever since record keeping began in 1895 and water temperatures in the Bay have been recorded at approximately 90 degrees F this past week. As water warms, its ability to hold onto oxygen decreases, thus stressing fish and other aquatic animals. Compounding the impacts of rising water temperatures, large mats of Sargassum seaweed have blown into the Bay from the Atlantic Ocean and has started to decompose.  Decomposition of this algae material likewise sucks up much of the available dissolved oxygen in the water column, creating the perfect storm of low dissolved oxygen levels that resulted in the recent fish kills. Both climate change and the over-fertilization of coastal waters with nutrients from sewage, pet waste and fertilizers also contribute to the overgrowth of algae and the subsequent low oxygen levels.

The Miami Chapter has historically claimed victories in Miami, but in the last few days their call to action has been unprecedented and extraordinary– by Friday night Chapter leaders were deep into calls with Florida Representative Michael Grieco and Senator Jason Pizzo, advocating for solutions to save Biscayne Bay and deploying a visual campaign across the City to let locals know to get involved.

In a matter of days their #SaveTheBay form has had over 100 respondents and they’ve launched a detailed neighborhood by neighborhood action plan to educate locals about fertilizers, septic systems and to get their communities to pass fertilizer ordinances and advocate for ocean friendly gardens; all measures which will help keep nutrients and other harmful pollutants out of Biscayne Bay and help prevent another tragedy. To get involved visit miami.surfrider.org 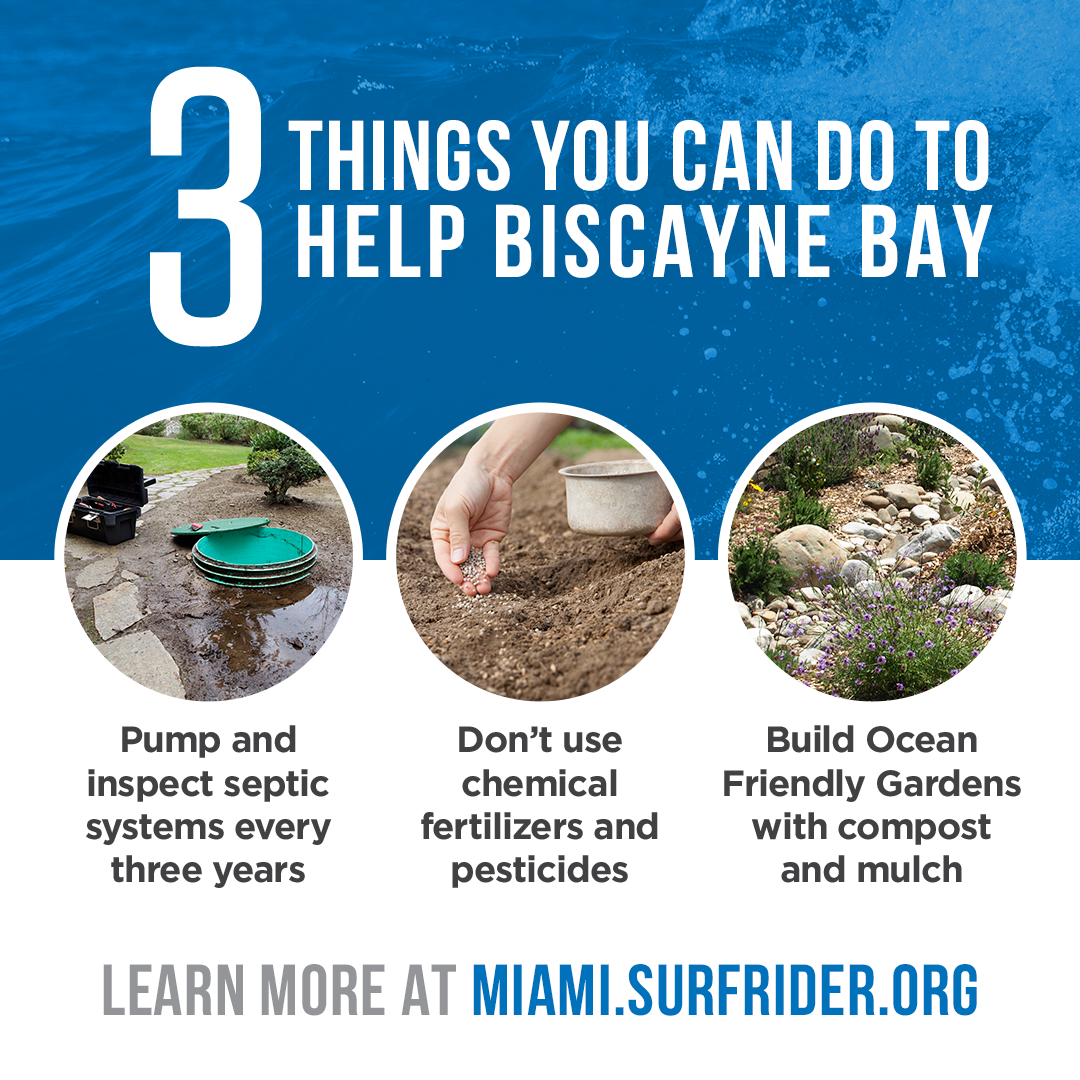