Summer crowds get a primer on the proposed ocean outfall for Rehoboth Beach, DE

The News Journal featured a cover story this past Fourth of July weekend of a pending project that is likely to have great impact on Delaware's beaches but remains in bureacratic limbo awaiting a decision from the State Department of Natural Resources and Environmental Control (DNREC). 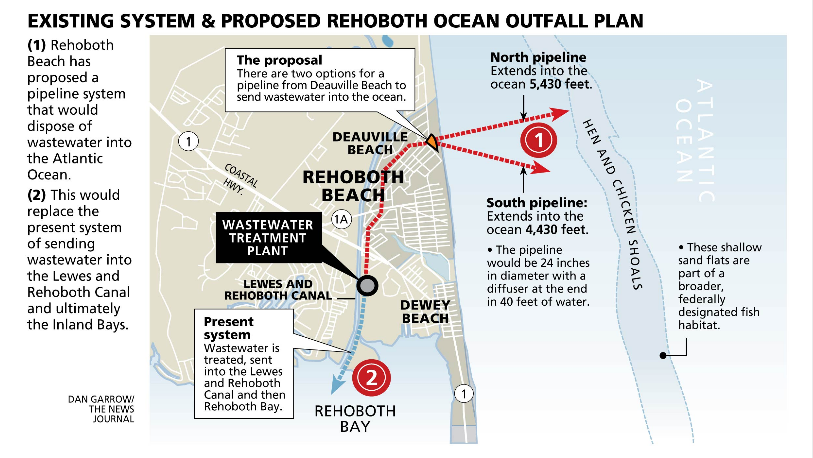 The City of Rehoboth Beach is under EPA order to remove its sewage treatment plant discharge from the Rehoboth Bay as the Bay has long suffered from excess nitrogen pollution.  The City has requested permission from the State to build an outfall pipe out into the ocean to relocate their wastewater discharge unfortunately near designated essential fish habitat.  The Delaware Chapter, along with other environmental allies, have been advocating for a Land Based Applicaition alternative which would upgrade treatment for the sewage effluent and recycle this treated freshwater using it for irrigation purposes.

DNREC has been sitting on this project, failing to make any decisions or recommendations at all.  Out going, DNREC head Collin O'Mara presents his idea for using constructed wetlands to filter out the nitrogen of the effluent to the News Journal.

This article did a great job of explaining the proposed alternatives and gave the Delaware Chapter a chance to voice their opposition to the ocean outfall to the paper's increased readership on a busy, holiday beach weekend.

The News Journal posted on delawareonline.com

They rank among the cleanest in the nation: miles of Atlantic Ocean surf at the edge of Delaware beaches that double as resort playgrounds and crowded mainstays for the state's economy.

Yet, this weekend holiday arrives at a pivotal moment as state and local officials look for a new place to daily send up to 3.4 million gallons of treated sewage now pumped from Rehoboth Beach into a canal just off the polluted inland bays.

After years of studies, court battles and debates, the leading option simply calls for pumping the waste about a mile into the ocean off of the north end of

It's an idea that has environmental groups and some residents worried the government is simply trading one dirty water problem for another, hoping simple dilution will protect Delaware's ocean beaches from the inland bays' fate.

Last week, Delaware's beaches were listed among the best of 30 coastal states for clean water by the Natural Resources Defense Council. Based on water samples nationwide over a five-years span, Dewey Beach is a "superstar" of America's shores.

If the outfall is built, Rosner predicts, "The PR [public relations] nightmare will never end."

Visit the Delaware Chapter's website for more information on their campaign to stop the Rehoboth Beach ocean outfall pipe and promote water reuse and recycling alternatives. 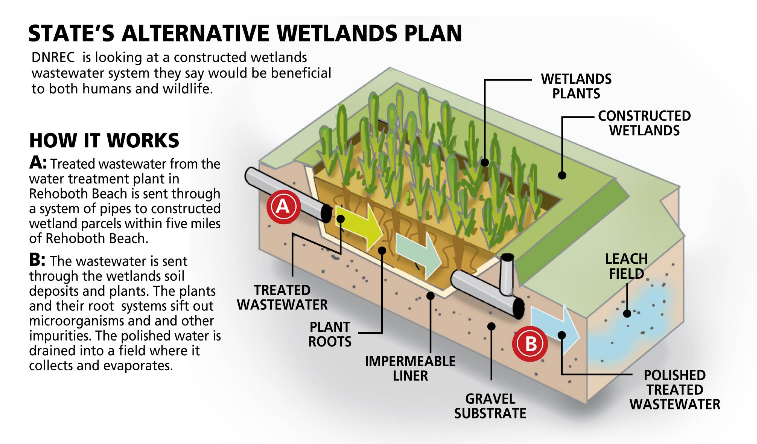