Surfrider Foundation and our pro bono counsel from McDermott Will & Emery celebrate a substantial victory from the recent decision of the United States Supreme Court, in Stop the Beach Renourishment v. Florida Department of Environmental Protection, upholding the constitutionality of the Florida state's beach management program and solidifying public beach access rights. The court unanimously supported the respondent, Florida DEP, and affirmed the lower court ruling of "no takings" of private property without just compensation in this instance. The court ruled 8-0, with the abstention of Justice Steven (who reportedly owns property on the Florida coast), to uphold the Florida Supreme Court's decision. Surfrider Foundation issued an amicus brief in support of public trust beach access rights in this case and to ensure against a ruling in favor of the private property owners. Surfrider recognized that had the ruling been in favor of the private homeowners, the concept of the public beach could have slowly vanished along with the eroding beaches around the country. 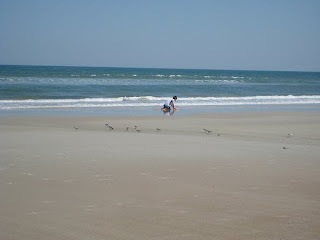 The Supreme Court held that Florida Beach and Shore Preservation Act does not deprive the petitioners of the littoral property rights without just compensation, and that petitioners did not suffer a "takings" through the state government's erosion response actions. The court held that Florida state law provides that an avulsive event, or sudden addition of sand, accrues to the state and public trust resources. Justice Antonin Scalia, known for his strict interpretation of U.S. Constitution and state law, writes for the Court:

"In Florida, the State owns in trust for the public the land permanently submerged beneath navigable waters and the foreshore (the land between the low-tide line and the mean high-water line)."

Therefore, anytime there is an avulsive event in Florida (including a beach renourishment project), the homeowner's private right of accretion does not attach. The Florida Supreme Court was affirmed in its decision to treat the right of accretions as "future contingent interest, not a vested property right" that could invoke the Takings Clause of the Fifth Amendments of the U.S. Constitution. The High Court opinion explains that a beachfront landowner would normally benefit by the slow process of accretion through the extension of the property boundary for all land that has accreted (and would, vice versa, lose land for erosion). However, in this case the publicly-funded beach nourishment project will not be considered an extension of private land, but the new sand will be available to the public, as it is considered part of the public trust. Additionally, the right of contact, as a littoral right for the beachfront property owners, does not attach in any exclusive manner for the residents.

Specifically, the "Judicial Takings" doctrine was the subject of debate among the Justices. Even though the majority held that there is no takings in this Florida case under the rules of the Florida Beach Management Program, four Justices stated that there can still be an instance where the "judicial takings" doctrine may apply in the future. The concurring Justices Kennedy and Sotomayor, opined that the Due Process Clause of the Constitution will likely foreclose any opportunity for a court to make the error of judicial takings and will alleviate the need to utilize the doctrine in any judicial decision-making. They also warn that the judicial takings doctrine could be abused and end up giving courts more discretion, rather than constraining the power of the judicial branch.

Although the issue in this case was specifically surrounding the Beach Management Program of the Florida Department of Environmental Protection, Surfrider anticipates that this case will be instructive for future courts and some lawmakers in deciding how to regard the public trust resources of our coastlines. The case serves as affirmation to the state's ability to protect their own natural resources and coastlines. As our shorelines are expected to change more rapidly with increased storms, hurricanes and sea level rise, this case will likely have increasing significance in the coming years.


Notes:
"Avulsive Event" - "sudden or perceptible loss of or addition to land by the action of the water or a sudden change in the bed of a lake or the course of a stream" as cited in the Sand Key case