Let’s face it.  We are all creatures of habit and we are accustomed to having unfettered access to oil.  Some of our largest corporations supply us with energy through fossil fuels, which are drilled from the earth.  We’ve had this arrangement for many years, but it isn’t working so well any more.

Pressure is now building to expand offshore drilling to the East and West Coasts and other regions of the country.  This is despite the high environmental impacts and comparatively low returns in terms of petroleum supply gained from this activity.  The overall economics are paltry, but we are creatures of habit and drilling for oil is what we know.  Needless to say, our country—including our energy providers—need to start forming sustainable habits instead.  Each of us can be helpful in that end. 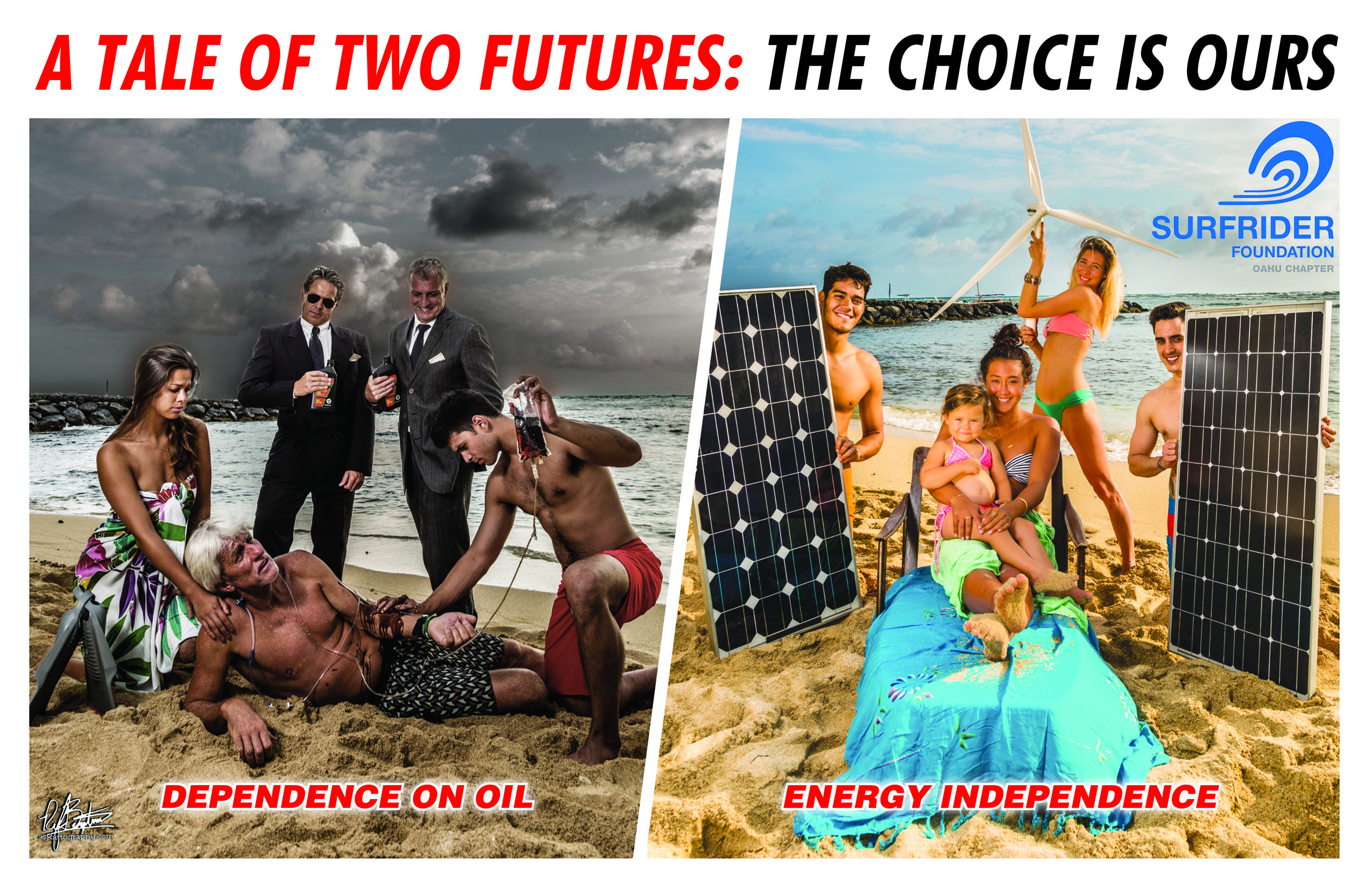 What is Going On

The Bureau of Ocean and Energy Management (BOEM) is currently operating under a 2012-2017 Outer Continental Shelf (OCS) Oil and Gas Leasing Program that schedules lease sales for oil and gas drilling in U.S. waters.  The majority of these lease sales are located in the Gulf of Mexico with several additional sales included off Alaska.  Importantly, the East and West Coasts are fully protected from lease sales in the current five year program; however, BOEM has begun development of the 2017 – 2022 OCS Program and the agency has signaled that both the Atlantic and Pacific coasts will be evaluated for oil and gas activities.  Moreover, BOEM announced recently that it would proceed with seismic airgun testing in the Atlantic, further signaling the federal government’s interest in offshore development of the East Coast.  This is a form of oil exploration, and is the precursor to offshore drilling.

What are the Impacts 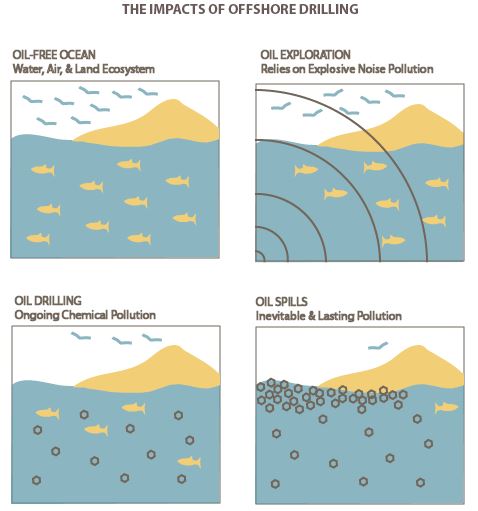 Offshore drilling hits our oceans pretty hard, and it does so not once, not twice, but three times.  The first environmental hit occurs during oil exploration.  Oil exploration involves seismic surveys that stun marine animals and diving birds, interfering with their navigation and communication abilities.  This can be deadly for individuals and species.  According to SEC reports, oil and natural gas companies spent close to $400 billion on exploration and development in 2013.  That is a lot of money tied to adverse environmental impacts that could go into sustainable energy alternatives instead.

The second environmental hit from oil drilling occurs as a result of the drilling process itself.  Large volumes of waste are produced through drilling.  This includes extracted water mixed with oil and other contaminants, drilling “muds” (including toxic chemicals and heavy metals) to cool and lubricate the equipment, and other forms of industrial waste.  These inevitably end up in the ocean and are ingested by marine life of all sizes.  Some of the tiniest marine creatures, foundational to our ecosystems and generally known as plankton, are particularly susceptible to crude oil pollution and suffer population reductions.

The third environmental hit occurs as a result of inevitable oils spills.  When I say inevitable, I mean 100% likelihood.  BOEM maintains probability tables and risk reports for active drill areas—all of them project significant oil spill risks based on historical data, which show a consistent, ongoing, and rising trend in oil spills.  These are not disasters that clear up quickly— marine mammal populations were severely impacted for several decades and are still returning to normal as a result of the Exxon Valdez spill in 1989.  These disasters weaken our maritime ecosystems, reducing wildlife populations, and dragging down tourism, recreation, and the fishing industries.

What You Can Do

1.    Support Ocean Planning.  A great way to prevent unfettered offshore drilling is to formulate an ocean management plan to better understand the tradeoffs of offshore development and to help identify locations for renewable energy projects.  This means taking into account sensitive marine areas and travel routes, beloved recreational areas and surf spots, highly valued fishing spots and economic centers, as well as the multitude of other important uses of our coasts and oceans.  Documenting this information is the first step in a planning process that takes into account a lot of stakeholder input and the actual conditions of our oceans. Surfrider is actively participating in this process and is working in three regions—Washington State, the Mid-Atlantic, and New England.  Your voice is an essential part of that process!

•    If you recreate along the Pacific Coast in Washington State, take Surfrider’s online recreational survey.  You input will help decision-makers value the diverse uses of our coast when considering whether to pursue offshore drilling.   Take the survey at http://www.surfrider.org/washington-survey/.
•    Get an over-view of the regional ocean planning process and see where you fit in.  Learn more about the Mid-Atlantic region at http://midatlantic.surfrider.org/.  Learn more about the New England process and opportunities for involvement at http://northeast.surfrider.org/rop/.

2.    Support Investment into Renewables.  It turns out that we will run out of petroleum at some point (who would have known?) and that we need to find renewable sources of energy.  Thankfully, it turns out that renewable energy is a valuable proposition.  According to Forbes Magazine, “Investors are Making Money on Renewable Energy.”  Surfrider believes in renewable energy as well and is supportive of those projects that are mindful of their potential environmental impacts and the surrounding environment. View Surfrider’s policy on renewable ocean energy here.

•    Encourage the organizations in your daily life to incorporate renewable energy and “green” funds in their savings & investment portfolios.  You might want to start by reviewing your own portfolio.
•    Show your support for renewable energy by participating in or organizing Surfrider’s Hands Across the Sand events.  The next nationwide event is scheduled for May 16, 2015, so there is plenty of time to get involved!

3.    Support Energy Efficiency Measures.  Many people are shocked to hear just how much of our energy goes out the window—sometimes literally.   Leaky buildings, inefficient cars, sprawling auto-dependent land use, missed opportunities for exercise, and inefficient heating/cooling systems are some of the major contributors to energy waste.  And according to Forbes magazine, America is the “Worldwide Leader in Wasting Energy,” costing us $130 billion per year.

•    Do a self-audit of your home, office, commute, and daily habits.  Pick one thing in your life that is causing energy to go out the window and change it—this may involve developing a new habit of your own.

4.    Support Clean Technologies Research.  One of my favorite sustainability gurus—Bill McDonough—is known for saying that “the stone age did not end because we ran out of stones.”  Instead, we moved on to more advanced technologies.  And so it goes with energy—it is time to move out of the petroleum age into the clean tech age.  One of the most promising sources of inspiration is nature itself.  For example, there are these things called trees that harness the energy of the sun and actually convert carbon dioxide into oxygen—amazing!  We can apply lessons learned from nature to develop cleaner and greener energy technologies.

•    Go to the www.AskNature.org website, search for “energy production” (or any other topic) and get inspired.  Then spread the word to your friends and colleagues.