Tale of the Sunken Buoy 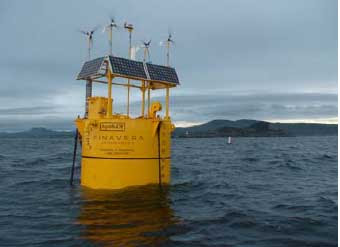 This just in from Surfrider Foundation Oregon:

In Oct 2007, a Finavera wave energy AquaBuOY deployed as a pilot project sank off the coast of Newport a day before its scheduled removal. The 72 foot buoy composed of metal and rubber has remained on the ocean floor since then, with Finavera representatives citing winter ocean conditions as an impediment to the buoy's removal. In April 2008, the Newport Chapter of Surfrider sent a letter to the Dept of State Lands (DSL) requesting an update on the salvage plan and expressing concerns over potential environmental and public safety impacts. During the recent Ocean Policy Advisory Council (OPAC) meeting, DSL Director Louise Solliday emphasized the agency's commitment to securing removal of the buoy. Solliday indicated that if Finavera does not remove the buoy by July of 2008, (Temporary Use Permit expires) the agency will make arrangements to remove the buoy. We thank DSL for their commitment to keeping our ocean floor free of large debris!