This week the Sign-the-Surfboard Campaign officially launched in Miami, Florida. The campaign kicked off with a flurry of signatures from local surf and skate shops, coastal restaurants, and other businesses that depend on a healthy, clean coast. Surf World Surf Shop of Pompano Beach, FL was one of the first businesses to sign the board, "We know the importance of our opposition toward offshore drilling and seismic testing in the Atlantic Ocean and Eastern Gulf of Mexico. All of our products at Surf World embrace the surfing and paddleboarding lifestyle, and this lifestyle has spawned a billion dollar surfing industry that supports the livelihoods of myself, my family, and thousands of other citizens living along the coastlines, " said Surf World Surf Shop Manager and Broward County Chapter Chair Craig Tolz, "Offshore Drilling and seismic testing jeopardizes the future of our oceans, beaches, and fragile marine life."

What is the Sign-the-Surfboard Campaign?

Where is it Taking Place?

The surfboard will be traveling fr 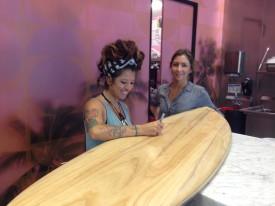 om Florida to Delaware – covering all of the coastal states along the way that are vulnerable to the expansion of offshore drilling.  Local Surfrider Chapters will be collecting signatures from coastal businesses in opposition to opening the Atlantic and Eastern Gulf of Mexico to this dangerous and polluting practice.  An additional sign-on letter is accompanying the surfboard and open for all East Coast and Gulf of Mexico business owners to sign, laying out specific reasons why more offshore drilling is a bad idea.  Firewire Surfboards has donated the beautiful wooden surfboard that will make the journey up the coast.

Filled with signatures, the Surfrider Foundation will present the surfboard and sign-on letter in Washington, DC to Secretary Jewell (Department of the Interior) and the Obama Administration, which are key decision-makers regarding the future of our coasts.  This will be a timely message, as the federal government will issue a proposed 2017-2022 offshore drilling plan and draft environmental impact statement for public comment in early 2016.

How Real is the Threat of New Offshore Drilling?

For decades our coasts were protected from new offshore oil drilling. However, in 2008, President Bush and Congress lifted the federal moratorium on new offshore drilling making our nation's ocean and coastlines vulnerable to the expansion of oil and gas development.  Now, the federal government is planning to open up the Atlantic and Eastern Gulf of Mexico to new oil drilling in their next five-year drilling plan (known as the 2017 - 2022 Oil and Gas Outer Continental Shelf (OCS) Leasing Program).  The threat is serious and very real.

How Can Others Participate or Support the Sign-the-Surfboard Campaign?

You can help protect our waters from offshore drilling by sharing our campaign on social media and donating to the Surfrider Foundation.  If you are a coastal business in the South Atlantic or Mid-Atlantic (Florida through Delaware), please contact us to arrange to sign the surfboard!  Business owners north of Delaware and others not able to sign the board directly can support the effort by filling out this online form. Follow the board and share our story by using the hashtag #NotTheAnswer.