The Maine Chapter worked with our Northeast Regional Manager to support the passage of a bill that would ban the intentional release of balloons in Maine!

This bill amends the State's litter law to provide that a person who releases or abandons a balloon outdoors is subject to penalties under that law regarding the waste materials resulting from that release or abandonment. It also requires a seller of balloons to register with the Department of Environmental Protection and to display in a conspicuous place at each purchase counter warning information developed by the department concerning the risks to the environment and to wildlife posed by waste materials resulting from the outdoor release of balloons; the choking and suffocation risks to children posed by the unsupervised use of balloons; the risks to individuals with latex allergies posed by exposure to balloons made wholly or partly from latex; and the penalties for littering resulting from the outdoor release of balloons that may be imposed by the State's litter laws.

The intent of this legislation is to prevent the release into the environment of balloons that pose a danger and a nuisance to the environment, particularly to wildlife and marine animals, and that cause hardship for the municipalities that must clean up the debris from balloons.

The regular suspects- folks who profit off from polluting our environment with mass balloon releases, represented by the Balloon Council- came out in opposition and were met by a mass outpouring of support for this bill to pass, including by Will Jones, the Kennebunk high school senior who asked his House Representative to introduce this bill. Check out our testimony, here.

A work session was set for April 3, 2019, at 1:30PM, where a divided vote resulted. The work session was reconsidered on April 4, 2019, but still resulted in a divided report of ought to pass as amended in the majority, which was finally reported out on April 25, 2019.

On April 30, 2019, the House voted favorably and largely along party lines, 87-yes 49-no, 13-absent and 1-excused (see how YOUR House Rep voted here, and consider emailing a thank you or note of concern! Contact info here).

The bill then moved to the Senate for a vote, where unexpectedly when it was called to the floor on May 2, 2019, enough Senators with normally very good environmental voting scores voted AGAINST its passage.

Voting down a good bill that would have taught kids that it's NOT okay to intentionally litter is not okay. This bill was cut and dry, clear in intent and articulation, and ready to protect Maine from this needless pollution - assertions to the contrary are unfounded and all reports indicate that both the Senate Chairs of our Environment and Natural Resources and Marine Resources Committees spoke extensively in support of adopting the majority report approved by the House.

Unfortunately, when the bill was again called to the floor, Senator LIBBY of Androscoggin moved to insist the Senate accept the minority report crafted strictly along party lines in the Environment Committee by Republicans, not to adopt this bill into law. This killed the bill.

YOU CAN STILL HELP! 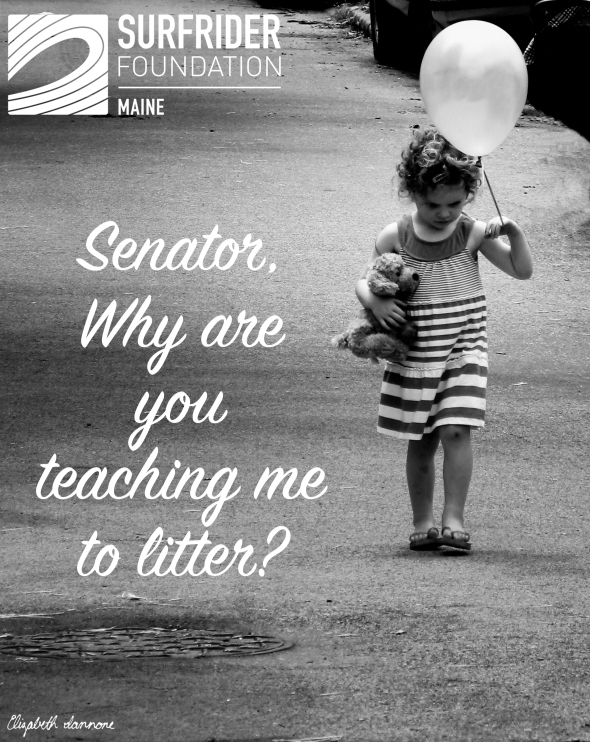 Consider also sending a note of THANKS to the Senators who voted the RIGHT way for kids + the environment (see how senators voted here; contact info here).

Please contact your state Senator to let them know you supported LD937, and were very sad to see the attacks against it in the Senate! Let your State Senator know you hope they will vote favorably on this bill when it comes back to the Senate in a future session, which it most certainly will (likely in January 2021). Find contact info here.

In the meantime, you can learn more about the serious threats presented to marine critters and the ocean by balloons by checking out this coastal blog.

Please give us a shout for talking points and/or to get more involved in our work in Maine.

You can also volunteer with our chapter and join/renew your Surfrider membership to BEST support our work in Maine.