The Surfrider Foundation is pleased to release its 2016 Clean Water Annual Report which tracks the progress of our Blue Water Task Force (BWTF) and Ocean Friendly Gardens (OFG) programs during the calendar year of 2016.  Especially during times when the authority of the federal agencies tasked with protecting our clean water and healthy coasts is becoming more and more uncertain, it is so encouraging to see how much a dedicated network of volunteers can accomplish in just one year!

Everyone should have access to clean water to surf, swim and play in, and the Surfrider Foundation’s Clean Water Initiative is taking a multi-tiered approach to tackle ocean pollution problems. We are testing the waters for bacteria  and toxins, raising public awareness and providing real solutions to ocean pollution; solutions that restore healthy watersheds, protect local water supplies and keep pollution from reaching the ocean.  Read the Clean Water Report to learn what Surfrider volunteers and activists are doing in communities around the country to protect public health and clean water at the beach. 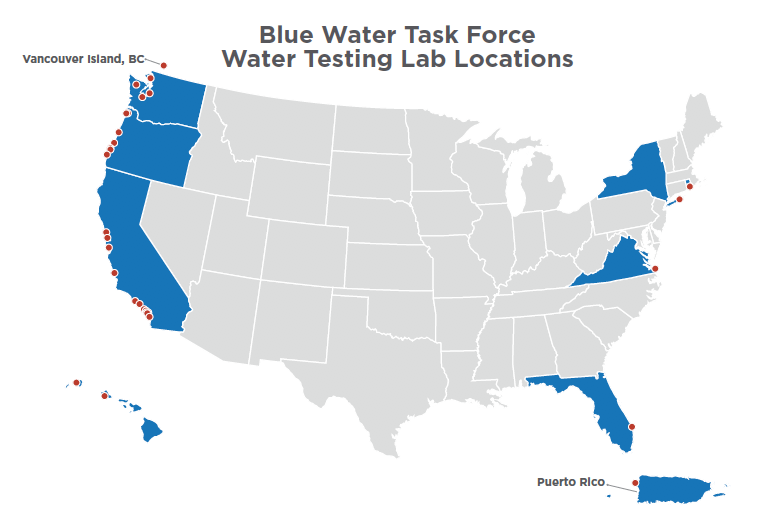 The collective results from all the participating BWTF labs have remained relatively constant since we began compiling an annual report in 2011.  Of the 5,181 water test results reported in 2016, 69% indicated low bacteria levels, 13% indicated medium bacteria levels, and 18% measured high bacteria levels that exceed the national water quality standard set by the EPA to protect public health in recreational waters. 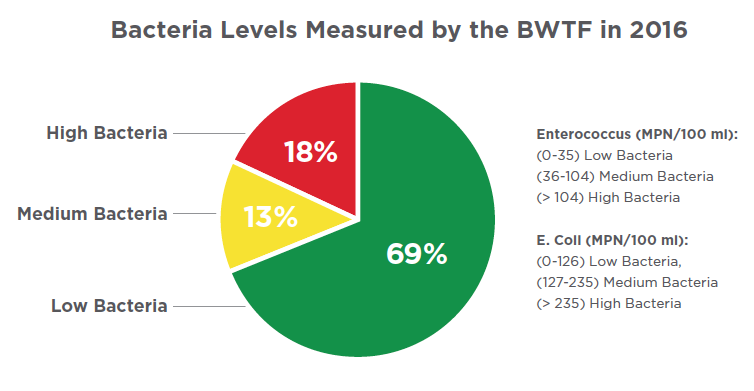 The majority of the water samples that failed to meet health standards were collected from freshwater sources such as rivers, creeks and marshes that are influenced by stormwater runoff or at beaches near these outlets.   This is consistent with national trends, which show that stormwater runoff is the number one cause of beach closures and swimming advisories in the United States.

Surfrider chapters are also digging in and using their Ocean Friendly Gardens program to help solve the water quality problems caused by stormwater and urban runoff in their local communities.  During 2016, Surfrider chapters and activists held 307 events - classes, neighborhood walks & workdays - clocking in over 6,250 volunteer hours. OFG volunteers educated and trained the public, landscape professionals, and government agency staff and officials on the the value of applying CPR – Conservation, Permeability and Retention - to our yards with Ocean Friendly Gardens.  Since Surfrider launched our Ocean Friendly Gardens program eight years ago, we have prevented over 15 million gallons of urban runoff from polluting our coastal waters and the ocean!

During 2016, several chapters were also able to achieve great success in advancing policy changes that have resulted in better public health protection at the beach and the protection of local water supplies and coastal watersheds. Read the Clean Water Report for more details on these campaign victories and to learn how the four chapters feature below are implementing their clean water programs to raise awareness about water pollution issues in their communities and to advocate for solutions.  Download the full report here or click below to read their stories directly.