This Asian American/Pacific Islander Heritage Month, we are celebrating our activists, friends, colleagues and like-minded organizations from within the Surfrider network. Throughout the month we will recognize those who inspire us and celebrate the achievements they've made to help protect our ocean, waves and beaches, while supporting beach access for all.

My name is Amanda Gersoff and I’m from Santa Barbara, CA. I’m currently a fourth-year Environmental Management and Protection major at Cal Poly, San Luis Obispo with minors in Land Rehabilitation and Restoration Ecology as well as Indigenous Studies in Natural Resources. I also work for the school’s sustainability department and am stoked to be a part of the Cal Poly Surfrider club! In my free time, I love pretty much all outdoor activities whether it's surfing, hiking, backpacking, running, gardening or camping and I also really enjoy making art.

Through the Cal Poly Surfrider club, I’ve been involved in different programs, such as Rise Above Plastics, Beach Cleanups, Ocean Friendly Restaurants, Ocean Friendly Gardens, and the Events Team. 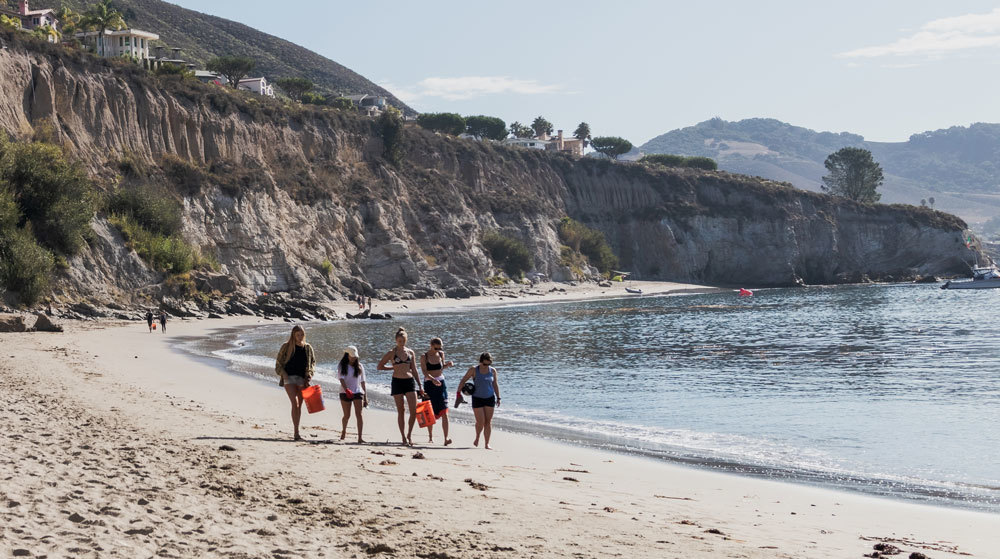 I initially became involved with Surfrider a few years ago when I joined our school’s club. The aspect of Surfrider that really drew me in was getting to work with others who also cared deeply about the environment and ocean protection. I am continuously inspired by this community to take action and advocate for the preservation of the places we love.

Q: How has your unique experience as someone from the Asian American community framed your perspective as an activist and as part of the Surfrider network?

As an individual from the Asian American community, my view of activism is largely shaped by advocating for the equity and inclusion of all people. In order to progress, it is important that environmentalism and activism also include social and environmental justice. Environmentalism should be intersectional and we should strive for the protection of the planet as well as its people.

Over the past few years, some of my favorite projects with Surfrider have been through our Rise Above Plastics team. We have made upcycled art projects, planted seedlings in reused containers and helped to draft policies about eliminating single-use plastics from our campus. This movement resonated strongly with me in particular, both in part due to environmental reasons and because of the values I was raised with. Growing up, my mom, who is Japanese American, taught us not to waste anything, which is important in Japanese culture. This largely shaped my views on sustainability and acting mindfully to lessen impacts upon the environment. 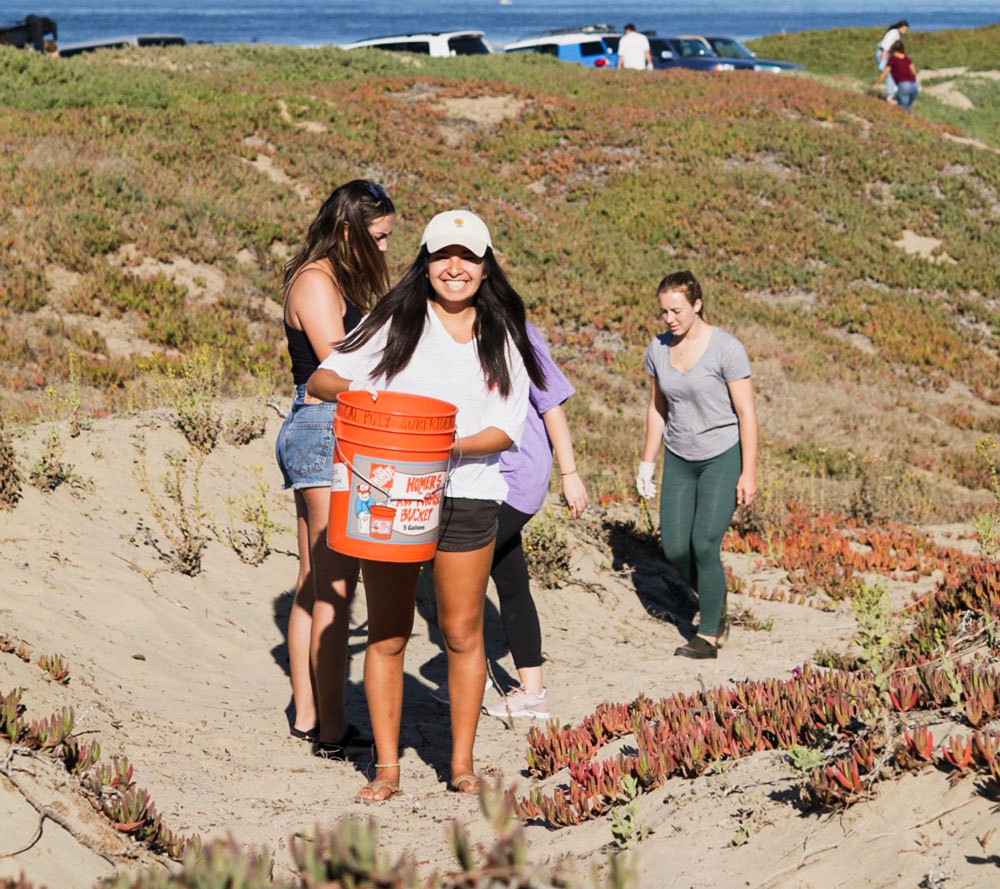 Q: Do you have any experiences where the Asian American and environmental movements have intersected?

Both of these movements, to me, illustrate the importance of advocating for the equity of people. More recently, we have seen increased racism towards Asian Americans, which is unarguably socially unjust. Similarly, examples of environmental racism are being brought to light, in which marginalized, BIPOC communities have been shown to be disproportionately affected by climate change, pollution, resource extraction, etc. In order to make strides in environmentalism, it is important to recognize the intersectionality between these issues. Ultimately, social justice and environmentalism are intertwined.

Growing up in Santa Barbara, CA, the sight of offshore oil drilling platforms became all too familiar to me. Currently, there are twenty-seven platforms in Southern California spanning from Huntington Beach to Point Conception. Offshore drilling, which is extremely detrimental to oceans and coastlines, has been the cause of numerous oil spills. In 1969, a blow out on an oil platform caused the release of nearly 100,000 barrels of crude oil into the Santa Barbara Channel which devastated the whole coastline. Also, for those who may be unaware, the first Earth Day originated in response to this oil spill on April 22, 1970.

More recently in 2015, I remember the oil spill off the coast of one of my favorite beaches, Refugio State Beach, when a pipeline ruptured. It was saddening to see heaps of oil washing up on the shores of our local beaches and to see pictures of the aftermath where sea birds were covered in oil. My hope is that we can turn to other forms of renewable energy so that we can lessen dependence upon the oil and gas industry. Drilling is killing! 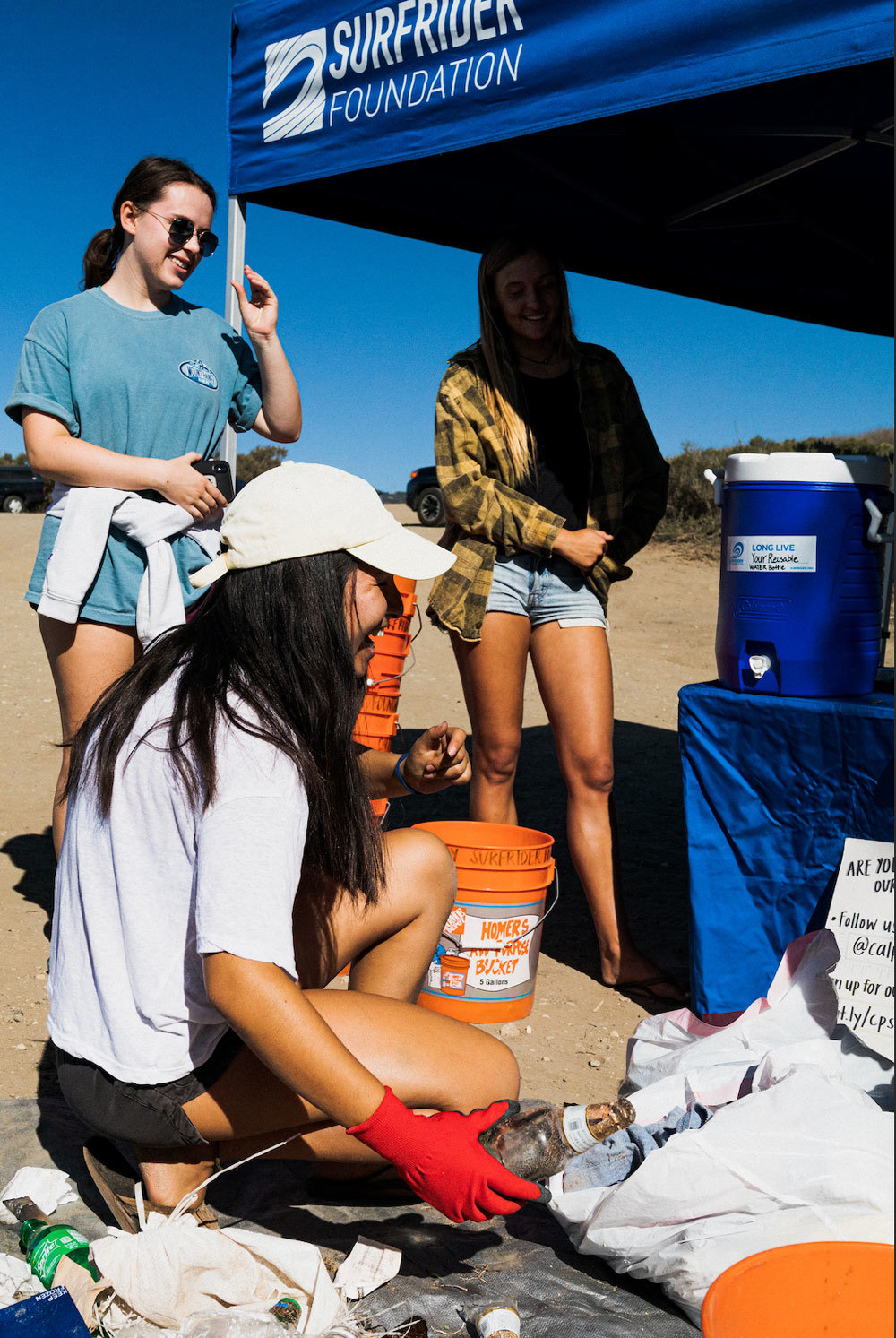 I’ve worked on several Surfrider projects including some artivism pieces with Rise Above Plastics. One of my favorite projects was making a sculpture out of single-use plastic cups collected from campus with the Rise Above Plastics team, which we displayed at our film festival. I’ve made a few pieces out of plastics and other objects that were found at beach cleanups, which were really fun to make! Also, I’ve helped with recognizing several Ocean Friendly Restaurants in San Luis Obispo as well as planning some of our events.

Q: What has been the highlight of your Surfrider experience (i.e., campaign, program, victory)?,

There have been too many highlights to name, but I always really enjoyed doing beach cleanups with our club! When we were still in-person, we had lots of beach cleanups in which we collaborated with other clubs and groups in the community. It was awesome to see other people outside of our club becoming more inspired and aware about cleaning up our local beaches. 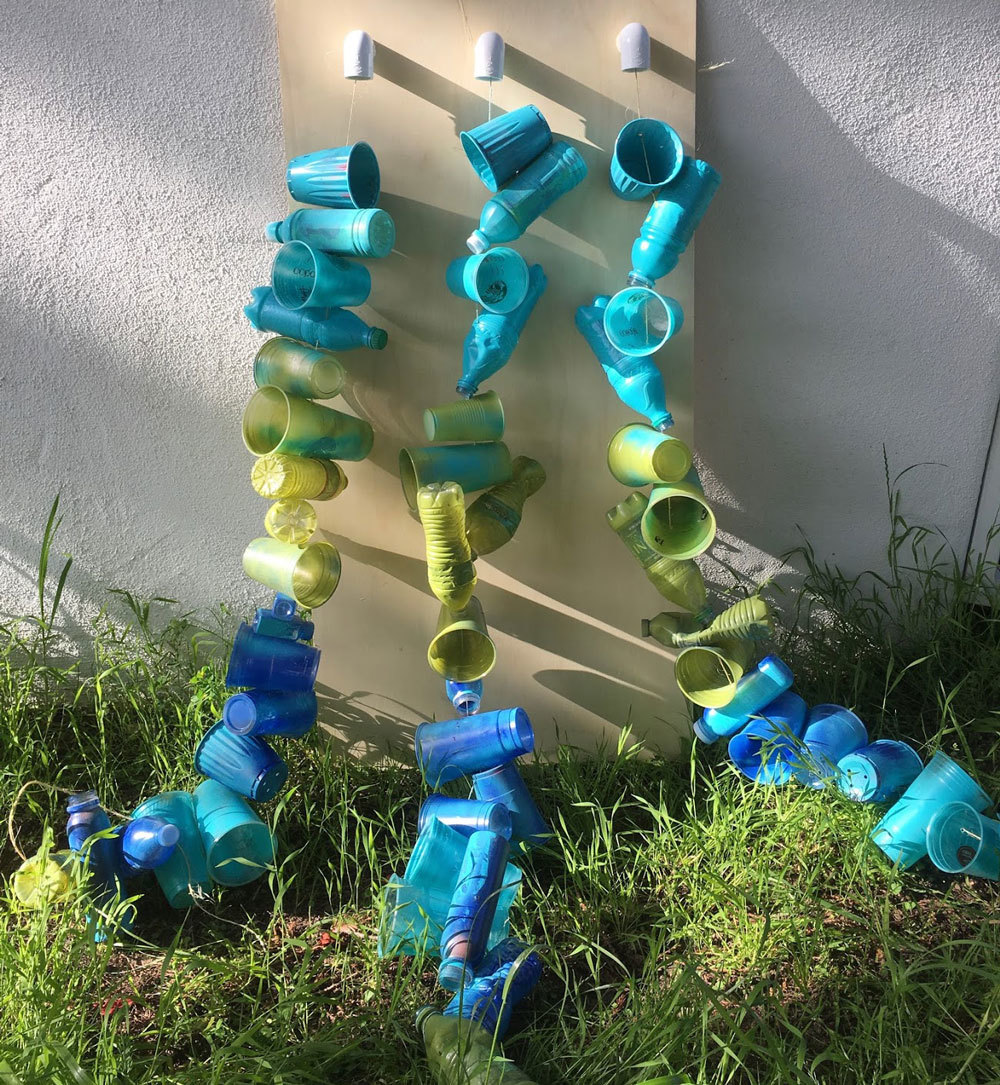 Q: What's been your experience being a surfer and/or ocean enthusiast as someone from the Asian American community?

Overall, I haven’t seen too much representation of the Asian American community while out surfing but that could be more so from living in the places that I have. Both Santa Barbara and San Luis Obispo are predominantly white which would likely explain this observation. However, my advice to anyone is: if you are interested in learning how to surf or trying something new, just go for it even if you don’t feel comfortable at first! Additionally, if you are in the position where you feel comfortable in the ocean or in a different setting, try your best to help others reach the point where they feel comfortable and included too. Everyone has had different privileges, experiences, and backgrounds which have led them to the point where they are. Instead of gatekeeping outdoor sports or other activities, do your best to be inclusive and kind. If more people are able to form a connection with the ocean or the environment in some way, they will be more likely to protect it. Help to inspire this connection in others.

Whatever your passions or interests may be, there are so many ways to get involved in Surfrider. One of my favorite things about environmental activism is that it is most effective when it incorporates the talents and skills from a wide variety of people. Everyone has something to offer and the most progress will be made when there is synergistic collaboration. No matter your skills or interests, we can all contribute to caring for the ocean and coastlines.

I have truly loved being a part of this organization through the Cal Poly Surfrider Foundation club. There are so many dedicated, passionate people in the club that inspire me immensely! Marissa Miller (past club president), Sophie Hannah, Lauren Londoño (current club presidents) and many others have done a wonderful job building this club. It has been so exciting to see all of the work that has been accomplished! 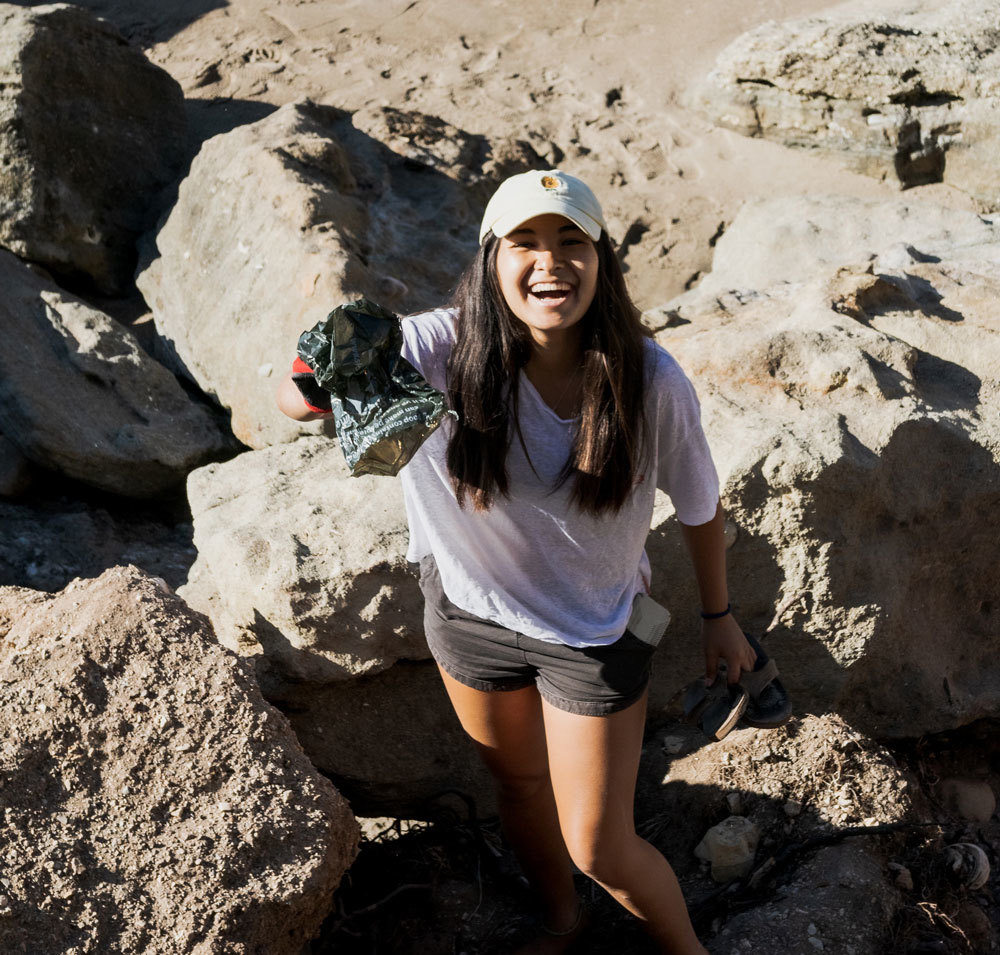