Hi there! My name is James Roubal. I grew up recreating and sailing on the shores of Lake Erie, the shallowest of our nation’s Great Lakes. Water conservation has been important to me ever since I was young. My family often took vacations to the coast in South Carolina, California and Mexico growing up. My fondest memories of my childhood are building sand castles, searching for ghost crabs at night, playing bocce ball on the beach and taking long sunset walks with my mom. Sadly, she is no longer here with us. The beach was her favorite place in the world. Now when I hear the crashing waves of the Pacific and smell the sea air, I feel her calming presence with me.

I am the Volunteer Coordinator for the Seattle Chapter of the Surfrider Foundation. In this role, it is my responsibility to get to know volunteers' interests to match them to opportunities our local chapter is organizing. Additionally, I coordinate with committees and campaign leaders to identify volunteer needs. Lastly, I frequently respond to inquiries from people seeking to volunteer with Surfrider and contribute to the chapter’s website and social media pages. 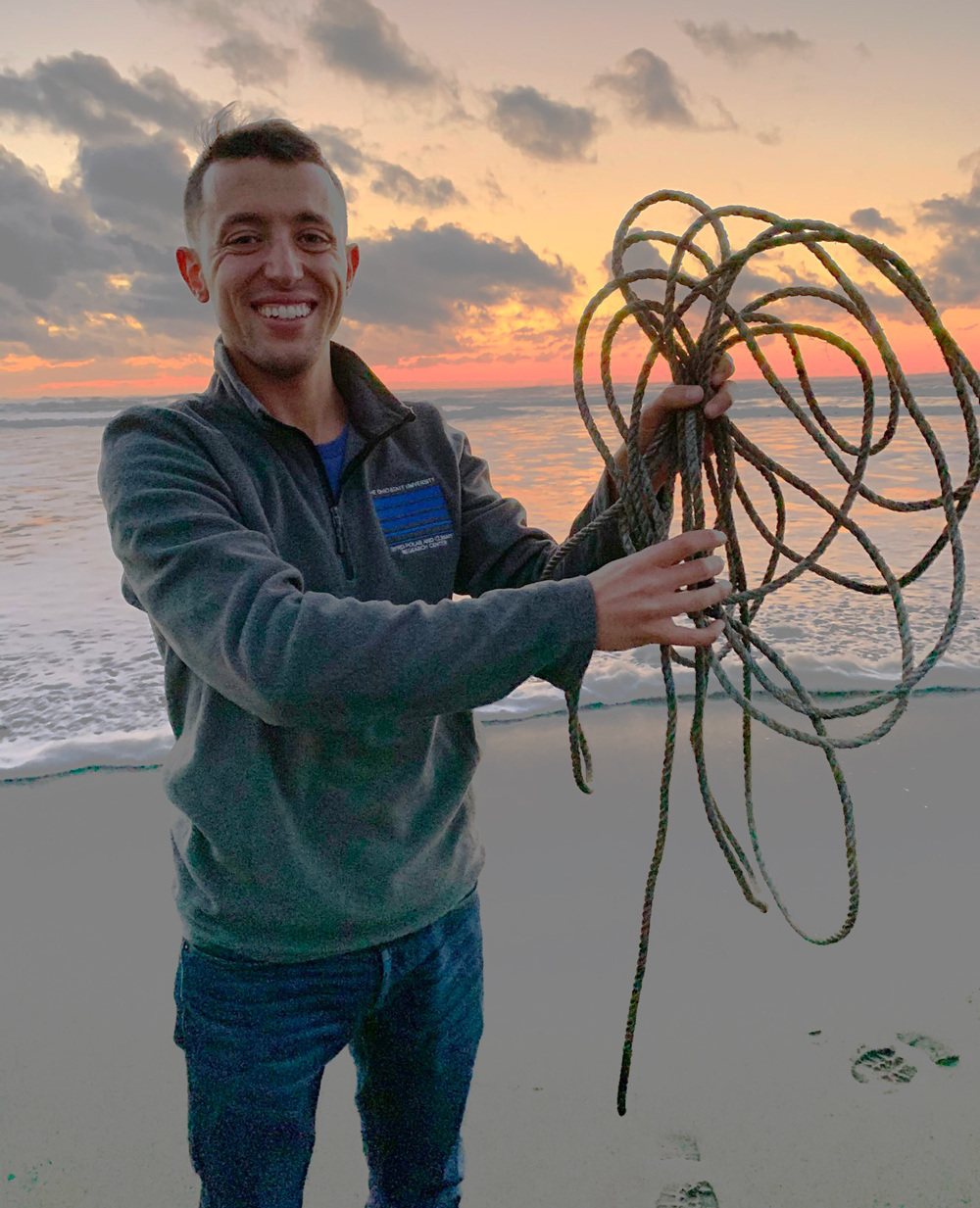 For my day job, I have been the Program Coordinator for the nonprofits Washington CoastSavers and the National Marine Sanctuary Foundation since 2018. In this role, I coordinate overall logistics for the largest single-day beach cleanups in the state for Washington CoastSavers, specifically the Washington Coast Cleanup in April, the 5th of July Cleanup, and Ocean Conservancy's International Coastal Cleanup in September. Surfrider is an integral partner in these cleanup efforts and sits on our Washington Clean Coast Alliance Steering Committee. Steering Committee members represent various state, tribal and federal agencies, NGOs, community groups and volunteers. Some other example organizations Surfrider and I partner with on the committee include Olympic National Park, Washington State Parks & Recreation Commission, Quinault Indian Nation, NOAA's Olympic Coast National Marine Sanctuary, Lions Club International, Pacific Coast Shellfish Growers Association, Discover Your Northwest, the Mountaineers, and the Seattle Aquarium.

Running stewardship events with the South Sound, Olympia and Olympic Peninsula Surfrider chapters inspired me to learn more about other campaigns Surfrider organizes. It was then I looked into volunteering with my local Seattle chapter and joined the Executive Committee in early 2020 as the Volunteer Coordinator.

Q: Has your experience as someone from the LGBTQ+ community framed your perspective as an activist and as part of the Surfrider network? And if so, how?

When you think of the ocean, a vibrancy of colors come to your mind. Coral reefs teeming with rainbows of biodiversity. Kelp forests swaying in the currents. A sunkissed horizon painting the sky. Planet Earth's marine ecosystems support a wide range of life. For me and some of my LGBTQ+ friends, we see ourselves as the terrestrial counterparts to this all inclusive underwater world. Working for the Seattle Chapter of the Surfrider Foundation, I want to conserve this wondrous submerged world that has inspired me and made me feel accepted for my volunteers and future generations of queer youth. The outdoors are for everybody! 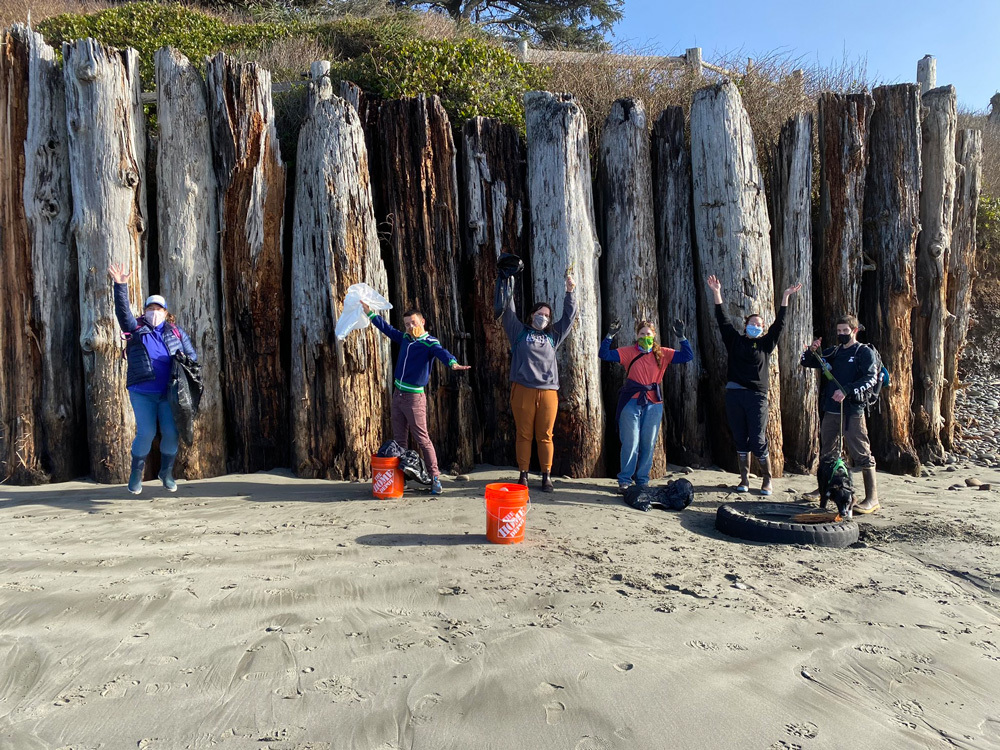 Q: Do you have any experiences where the LGBTQ+ and environmental movements have intersected? If so, can you tell us about them?

Some of my favorite experiences where the environmental and LGBTQ+ movements have intersected have been getting more involved with nonprofit organizations like OUT for Sustainability (OUT4S) and programs like Earth Gay. OUT for Sustainability mobilizes the LGBTQ+ community for environmental and social action, in pursuit of a fabulous planet. Earth Gay is one of the LGBTQ community’s most visible forms of environmental activism, and a satisfying way to make friends, invest in local parks, and get dirty by planting trees and removing invasive plant species. In addition to in-person community action, Out for Sustainability serves as the voice of LGBTQ+ sustainability values, speaking at conferences around the country and writing for, and being featured in, publications around the world. Intersectionality is key to OUT4S’ philosophy and perspective on sustainability, where the facets of who we are are viewed as an interconnected paradigm of identity, society, and environment.

Ocean acidification, water quality from stormwater runoff, and wildlife entanglements from marine debris are just a few local issues that are prevalent throughout Washington state waters. The Evergreen State is particularly vulnerable to ocean acidification. Washington’s coastal waters experience seasonal upwelling where waters that are naturally low in oxygen and rich in CO2 rise to the surface. Coastal waters also receive excess nitrogen from human activities that can stimulate algae blooms. As these blooms die and sink, bacteria decompose them, depleting oxygen from the surrounding water. The combined effects of upwelling, nitrogen inputs, and low oxygen zones mean that Washington is likely to see increased impacts of ocean acidification on marine organisms earlier than other coastal areas.

Our partner scientists at NOAA’s Olympic Coast National Marine Sanctuary have discovered some persistent industrial chemicals, even those no longer used in this country such as DDT, have found their way into marine food webs and have been detected through contaminant monitoring efforts. The potential for contamination by petroleum products, pathogens and chemicals is a concern. Four of the five largest oil spills in Washington state history have occurred in or moved into the area now designated as the sanctuary. In our more urban areas, there has been an increase of stormwater runoff during the rainy seasons due to urbanisation, which leads to impaired water quality that affects both marine and freshwater ecosystems.

Our ocean and waterways are continually polluted with a wide variety of marine debris ranging from soda cans and plastic bags to derelict fishing gear and abandoned vessels. The volumes of debris afloat in our oceans will have untold ramifications for hundreds, if not thousands, of years. Every winter, intense storms frequent the Washington coast with heavy rainfall and winds blowing up the coast from the south. These winds drive marine debris from out in the ocean onto the beach, negatively impacting the health of vital marine ecosystems. An alarming rate of marine debris has accumulated on the sandy and rocky beaches of the Washington coast. 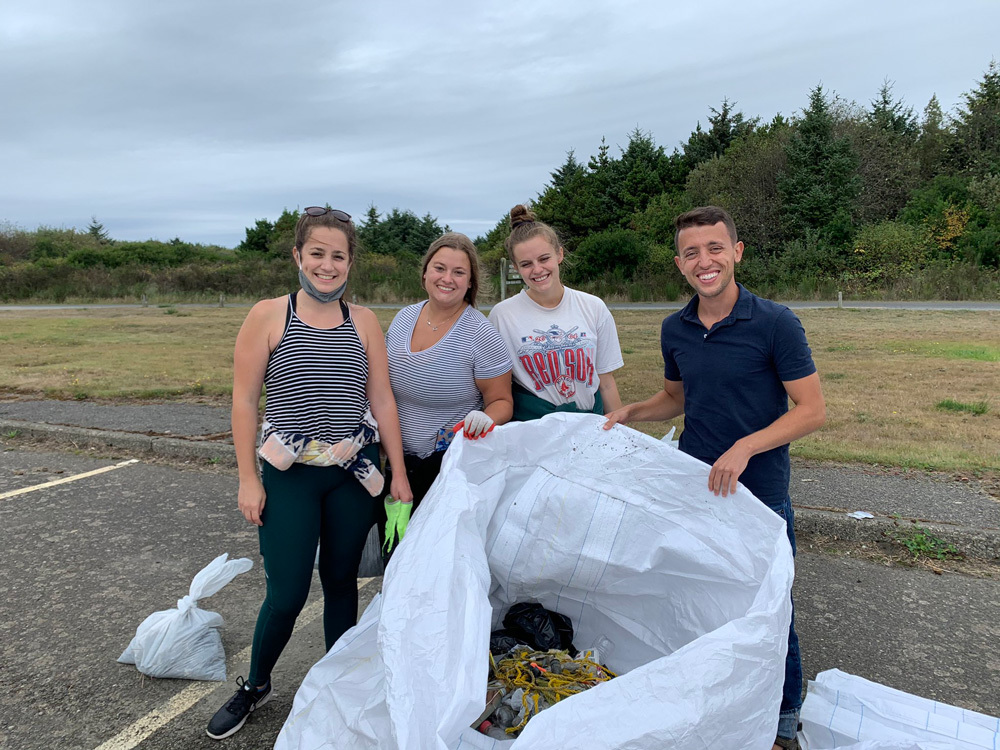 Besides helping coordinate local beach cleanups throughout Seattle and the Olympic Peninsula, I also work with volunteers to sign on and share Surfrider’s Take Action letters reaching out to their representatives to support new laws that protect our PNW shorelines. It is critical that our legislators hear from their constituents that they support these new water conservation bills to help them successfully pass in the House and be signed into laws by the Governor.

The most recent campaign victory, Foam Free Washington, that just took place in May of 2021. Governor Jay Inslee signed into law SB5022, a major piece of legislation that will help tackle the plastic pollution crisis. This comprehensive policy bans certain expanded polystyrene products, such as hinged clamshells, plates, and cups. It also mandates minimum recycled content in plastic bottles, jugs, and trash bags. Additionally, this legislation is the first in the nation to comprehensively require people to opt-in for utensils, cup lids, and condiments. This is an incredible win for plastic pollution in the state of Washington and will set precedent for other states in the U.S. This victory goes to show that when activists come together to make our voices heard on issues that we care about, the world is our oyster.

Q: What's been your experience being a surfer and/or ocean enthusiast as someone from the LGBTQ+ community?

There's a real lack of LGBTQ+ representation in the ocean conservation community and I'm thankful for campaigns like this one and the #PrideInTheOcean campaign from the National Marine Sanctuary System that help break down barriers for other queer folks. It is critical to show our diverse volunteer base they belong in these outdoor spaces. Queer representation matters. As our volunteers clean Washington's rugged beaches, I want them to feel safe, accepted, and welcomed. In order to heal the planet, we must have Queer, Black, and Indingenous liberation.

I have made lifelong friends and memories being a part of the Surfrider network. Volunteering is one of the best ways to meet new people who are passionate about issues that also inspire you. One of my favorite quotes is from Henry Dyer, which says “Volunteerism is the voice of the people put into action. These actions shape and mold the present into a future of which we can all be proud.” Surfrider has made me feel excited to be a part of an amazing network of activists who are all tirelessly working to protect our planet’s most valuable resource, the ocean. 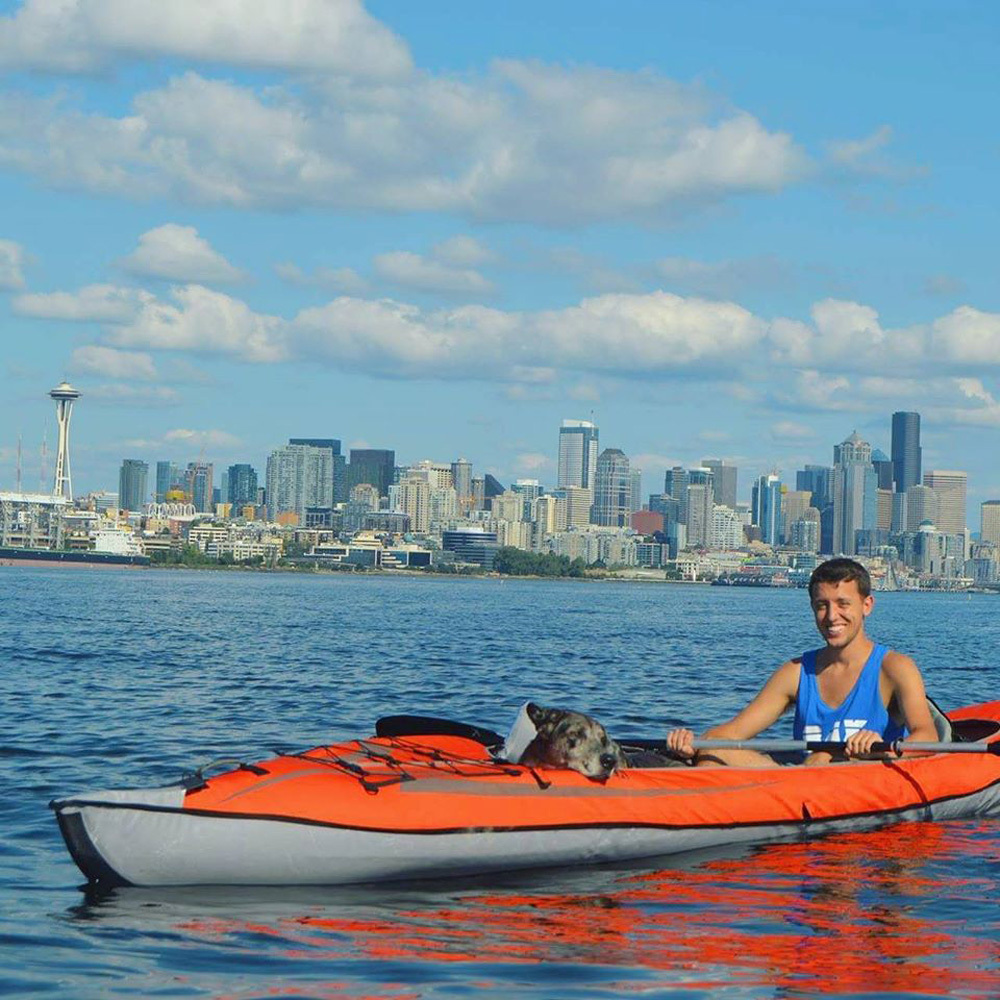 One thing I really appreciate about Surfrider is the understanding that we are all humans with other time commitments between work and our personal lives. I do not think we talk about burnout enough in America. Especially within this past year or so, there are days we all need to unwind and find time to take care of ourselves. Working on various conservation issues over the past ten years or so of my life, I have learned that these issues are daunting and often emotionally draining. Please don’t forget to check in with yourself and how you are doing physically and mentally. Have a safe and Happy Pride! 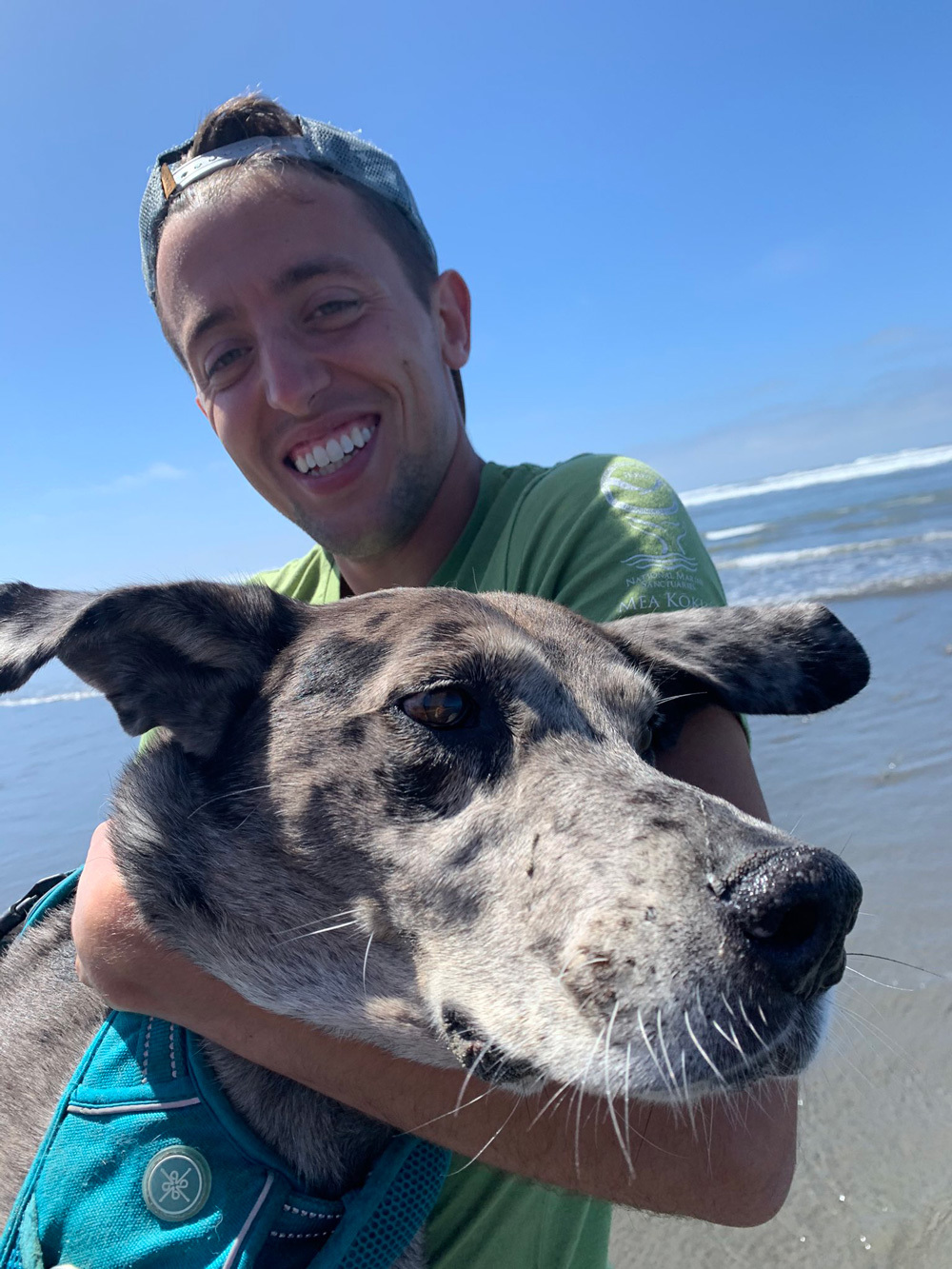