You’ve likely seen Black Girls Surf founder Rhonda Harper in the news lately as the organizer of multiple paddle-outs around the world. The events honor the life of George Floyd and other African Americans killed by police, and are meant to open dialogue about pain caused by continued racial inequalities. As Harper explained to the Associated Press, “There’s a lack of awareness and empathy in the surf community when things like this happen,” Harper said. “I have a lot of white surf friends who don’t get it or are so privileged that they don’t have to mourn the loss of a black life. They’re talking about waves being beautiful and there being too much negativity in the world.” 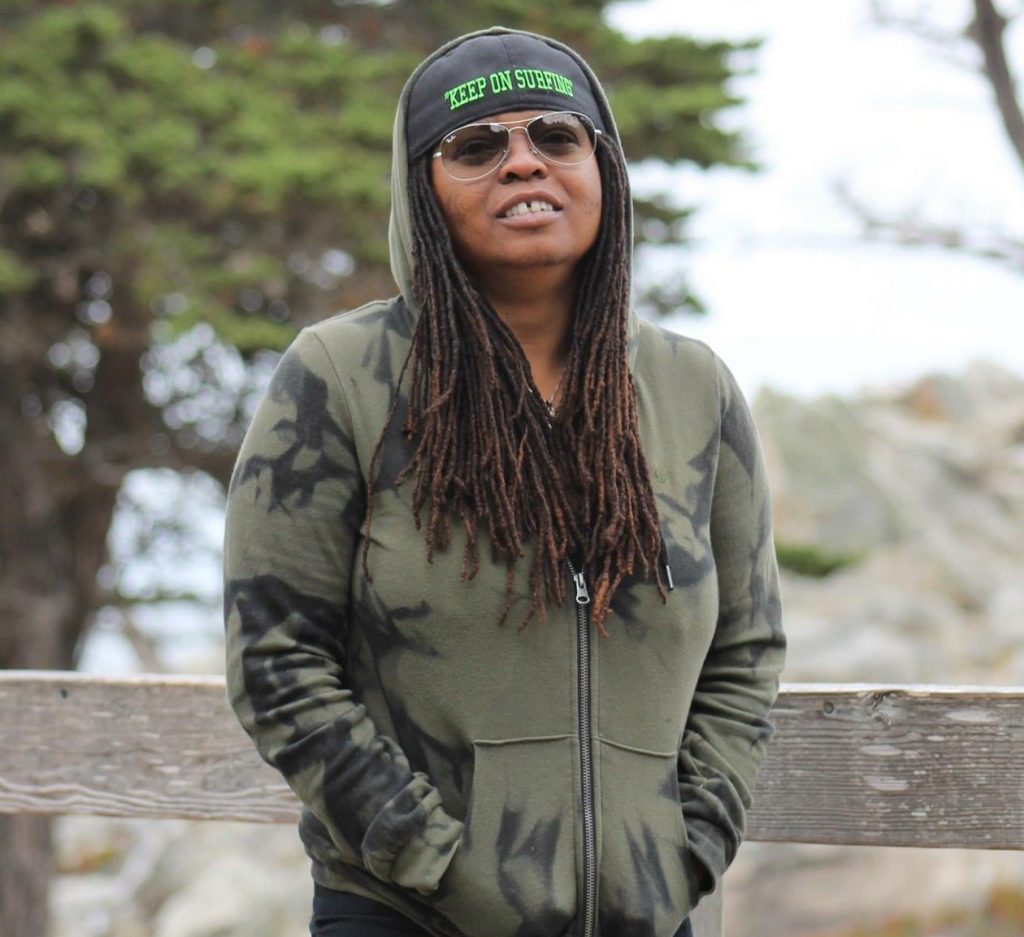 Harper currently volunteers with Surfrider’s San Mateo chapter, but her relationship with Surfrider goes way back to her days as a South Bay chapter executive committee member working on Marina Del Rey watershed issues. Her company, Inkwell Lifestyle, partnered with the chapter for their “Giving Back to the Community Days,” providing surf lessons to foster kids and involving them in water-quality testing with Surfrider EC member (and South Bay surf legend) Alan Walti.

Years later, Harper would reconnect with Walti when he was spotting and she was running commentary for the Huntington Beach Surf24 contest. He told her she'd come a long way since those early Surfrider days. “One of the proudest days of my career yet!” Harper said.

Walti recalled the day with cheer as well. “That was a fun event for me to work alongside of several other well-known surfers,” he said. “Also Rhonda introduced me to several up-and-coming black surfers from around the world. It was great talking to them to see what their views were the whole competitive structure of professional surfing at the time.”
Since then, Harper has been steadily introducing the world to up-and-coming black surfers. 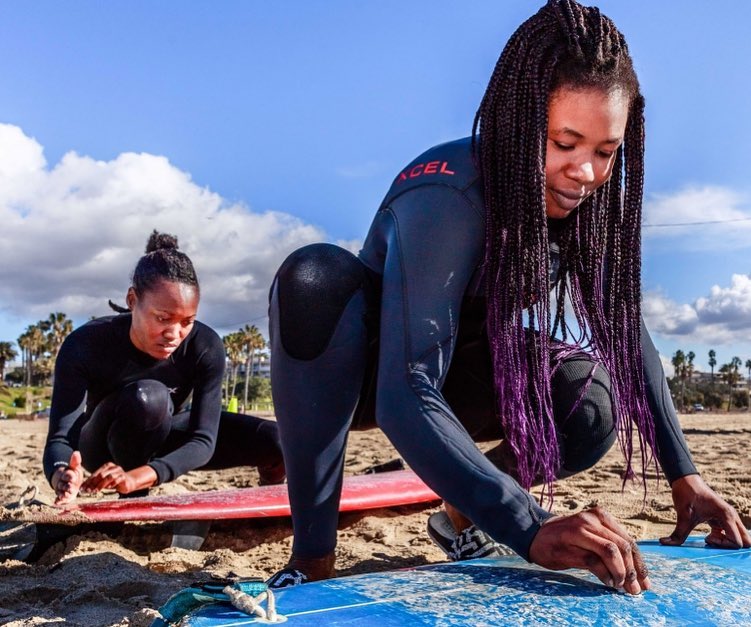 “Black Girl Surf is the world that I want to see.”

Santa Cruz. Senegal. Sierra Leone. Jamaica. Los Angeles. New York. In each of these places, Black Girl Surf founder Rhonda Harper’s vision of a surf world full of coaches, mentors and trainers of color is manifesting, most notably with plans to send West African female surfers Khajdou Sambe (of Senegal) and Kadiatu Kamara (of Sierra Leone) to the Tokyo 2020 Olympic Games. Both women are the first and only female surfers in their countries.

Harper’s eclectic résumé – U.S. Coast Guard veteran, celebrity designer (Eddie Murphy among her clients), journalist, corporate CEO and more – doesn’t reveal an obvious path to starting a nonprofit for women of color seeking to become professional surfers. As she shares her story, however, how she arrived where she is now makes perfect sense.

Last year, Harper did just that, recounting how a girl from Kansas City, Missouri, ended up training West African female surfers for the 2020 Olympics as part of a Marlin Ray-hosted Diversity in Surf panel at Pacifica’s Traveler surf shop. It started when Harper’s family moved to California – as a teenager, she became “obsessed” with Gidget and surf culture. Concerned with keeping Rhonda out of trouble, her parents sent her to Hawaii, where her sister attended school and lived in a gated community on the North Shore. What happened next depends on how one defines “trouble”: A crew member from the popular 1980s detective show Magnum, P.I. noticed Harper at the beach and invited her to paddle out with him. The experience guaranteed that from then on, surfing would make up a huge part of Harper’s life

“If they don’t have the job you want, create it.”

As a black female surfer, Harper fit neither the media's stereotype nor advertiser's target demographic. “Roxy wasn’t working for me,” she noted during the Marlin Ray panel discussion. “I started looking for things that were familiar, to find me somebody who was going to look like me.” In surf media, she continued, “we’ve taken away from the original point of surfing – surfing is about fashion, fitness, health, beauty, about product. It’s not really about your skill or who you are in the water, it’s really about selling a T-shirt.” She didn’t see herself reflected in the blonde models making up the whole of surf advertising nor could she find swimsuits designed for black women. She also didn’t see anyone coming forward to change that – so she took on the role herself.

Harper eventually connected with Black Athletes Sports Network, where she worked as a writer and commentator, and started judging surf contests as well. In 2014, she started Black Girls Surf as a way to bridge the gap between surf camps and competing professionally. “There’s no follow-up for girls who want to continue up,” she said. To that end, Black Girl Surf hosts development camps (“board meetings”) and Harper has spent much of her time the past several years coaching Khadija “Khadjou” Sambe with an eye on the 2020 Olympics. 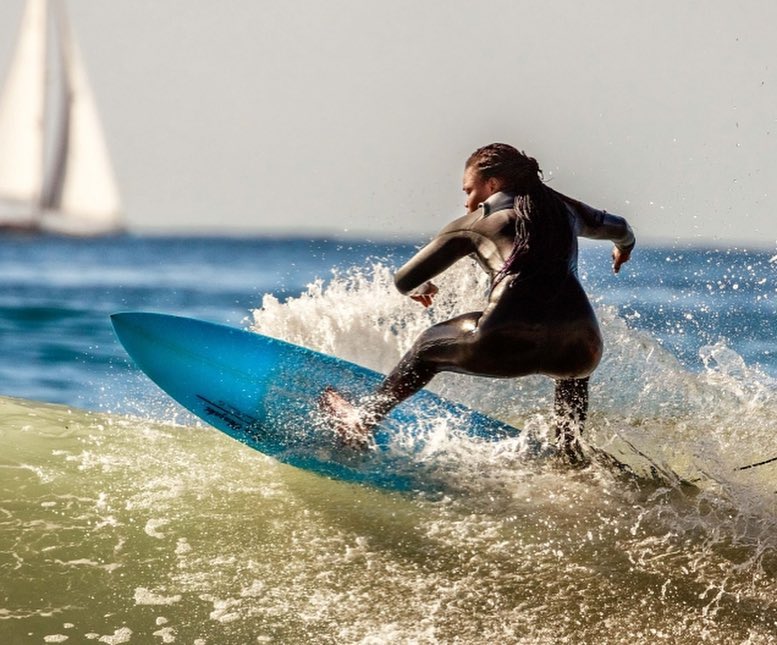 To truly appreciate this, one must keep in mind surfing’s origins and the near erasure of those who gave birth to it. Generations of people indigenous to Hawaii and Polynesia surfed, but as white missionaries showed up, they banned the sport as a way to eradicate native culture and take over the land. Variations of wave riding also existed in West Africa and Peru in the 1800s, yet since taking off in America, surfing has been portrayed in magazines, movies and contests as a primarily white experience. Stereotypes and segregation have kept people of color off the beaches and away from the water for decades – a truth that remains relevant today. 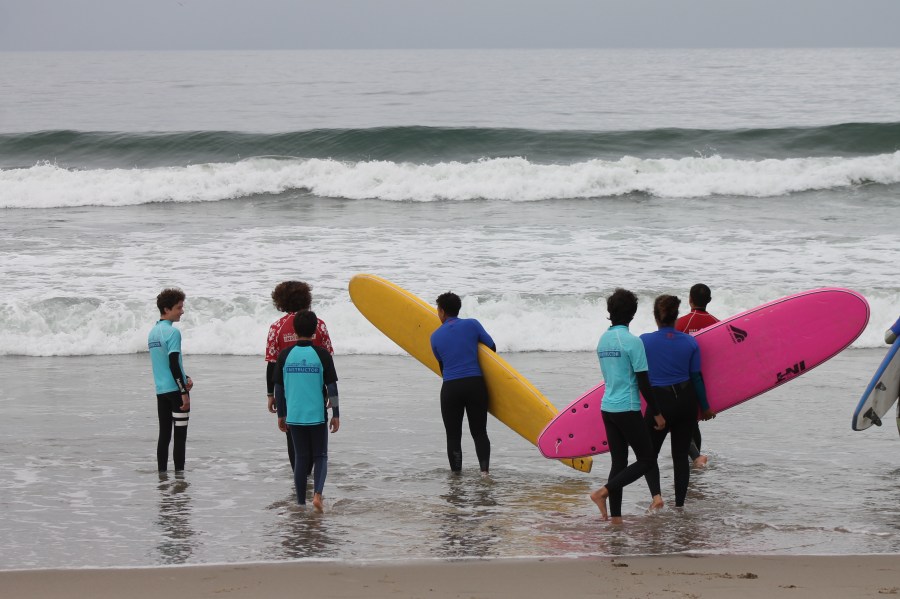 A Black Girls Surf board meeting

“The most racist thing”

When asked about negative experiences at the beach, Harper recounted a time in Santa Cruz after she’d come back from Hawaii. “I was dating a white guy,” she said. “We were down at Lighthouse Beach having a good time, we climb up the hill, I get to my car – at that time I was driving a 300ZX and in 1986, that was like a Porsche – and as soon as I looked over, I saw on my car, in wax, ‘Go Home N——-.’

“That was my first experience dealing with localism and racism both at the beach. And that happened on my own turf. The first beach I’d ever laid eyes on was Lighthouse Beach. Imagine coming back – you’re proud you learned how to surf, you earned your stripes, you got beat down on the North Shore, come here and it’s a flat day and you come back to your car and this.”

Cut to 2018, back in Santa Cruz at Pleasure Point and Harper finds herself arguing with “guys old enough to be someone’s grandfathers” about whose “territory” she’s on.

“I’m standing in the middle of the street at Pleasure Point yelling at this grown grandpa about the beach which is free and a public entity. Why am I arguing with you about territory on the beach when it’s public property? That’s where we are where grown men have decided to intimidate people who look different than them for no reason at all.” 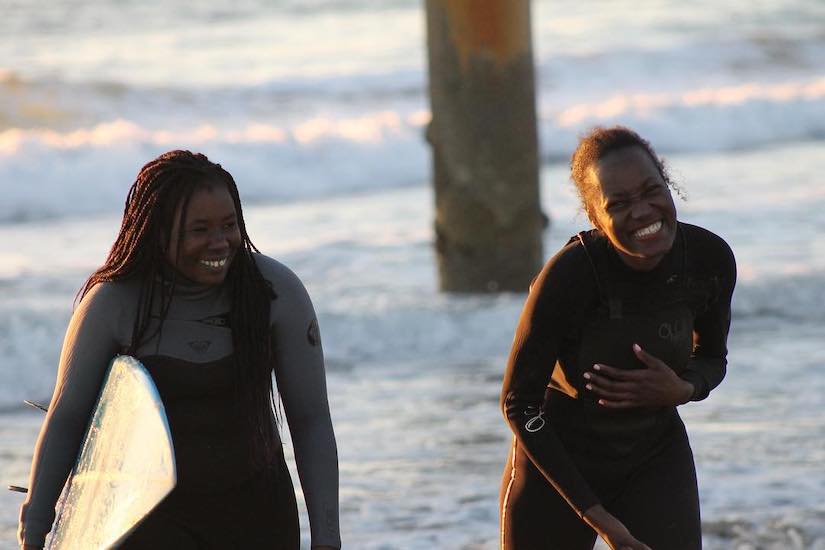 “I’ve never been scared to try something new.”

Harper and Black Girls Surf scored a fair amount of media coverage around Sambe’s time training in the U.S. last fall. PRI chronicled how Sambe learned to surf from her uncles and cousins, but had to sneak out her window to get to the waves. Outside Magazine reported on how Harper found Sambe online while scouring photos of surfers in Dakar. Harper looks forward to the day when a black female surfer isn’t seen as a new and unusual trend, but is newsworthy for her athleticism and achievement. From a commercial standpoint, she points out, by excluding black athletes, the surf media is missing out on a significant and larger audience.

The money-making potential matters: so far Black Girls Surf has been largely funded by Harper’s U.S. Coast Guard pension and through donations. What she and her growing team of aspiring professionals needs are sponsors with the vision and motivation to expand what competitive surfing looks like on a global scale. In some places, the lift is particularly heavy. In Sierra Leone and Senegal, for example, girls need assistance not just with surfing, but with education and efforts toward equality.

And as a longtime supporter of Surfrider, Harper remains keenly aware of the environmental issues not just at her current home break of Santa Cruz, but in the other countries where her work is taking place. Africa suffers from ocean trash, sewage problems, sand-mining and a host of other access issues, she said. Without help from the government there, “surf tourism is not going to happen.”

Considering the amount of change Harper’s made happen so far, big challenges clearly don’t faze her. But, she emphasized, her role is not to remake the surf industry. “I’m trying to tell you my story and how I’m trying to get these girls moved to the next level, a level they haven’t been able to compete in before.”